Today, we at A Book of Cookrye would like to salute the First Lady of the United States!


...Who did you think we meant? We are going back to the Great Depression to present...

Does anyone else think the title sounds oddly religious? Or is this just a result of growing up in a house filled with candles and pictures of Our Lady of Somethingorother?


While these days, candidates' wives have first lady bake-offs, apparently we've been getting recipes from first ladies for a long time prior. We at A Book of Cookrye couldn't decide if this looked good or if it just looked very 1930's. Either way, it looked like nothing that's ever been served to us in the name of salad. However, the instructions were kind of vague. We're supposed to heat this in a double boiler, but how hot is it supposed to get?

Incidentally, when this book was published, Grace Coolidge hadn't been Our First Lady for five years and the White House had changed hands twice. Did people in the Midwest just really like the Coolidges, or did no one attending Mrs. George O Thurn's (regularly sold-out) cooking schools think Eleanor Roosevelt was someone you'd get a salad recipe from? We thought for a second that this salad recipe might just have been really popular in the Midwest (which is apparently where Mrs. George O Thurn was most popular) long after the Coolidges left the White House. But, an (admittedly hasty) search for Grace Coolidge's recipes didn't turn up any other mentions of a salad. However, the Grace Coolidge ice box cookies that turned up in a lot of places look really good.

Also, how much cream is supposed to go in this? I reread the recipe five or six times before concluding that either Mrs. Coolidge forgot to name an amount or Mrs. George O Thurn forgot to write it out. Cross-checking with the other recipes in the salad section (most of which involve whipped cream in the dressing), we went with half a cup. 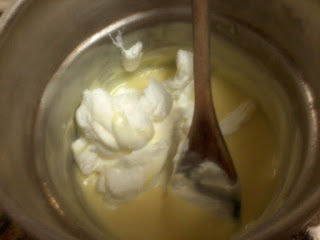 Maybe this recipe was popular for a long time. "Salads" in the Midwest are often completely interchangeable with desserts, and I'm pretty sure I could freeze this dressing and call it ice cream. However, this is most definitely a salad. See? It's got lettuce. We thought about getting iceberg, but red leaf was seriously marked down.

Does anyone else find the phrase "after dressing has been applied" a lot funnier than it has any right to be? People apply lipstick to their faces and fertilizer to their dying grass, but who applies dressing to salads? We thought this meant we'd have to spread it over like mayonnaise, but it was about as runny as you'd think salad dressing should be.


Mrs. Calvin Coolidge's favorite salad looks like a sundae on a lettuce leaf. The recipe doesn't say to use a maraschino cherry, just a red one. We thought about getting fresh cherries, then we checked the price. 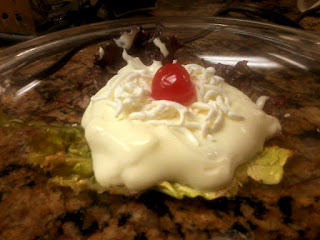 To our surprise, this was actually really good and left one feeling oddly happy.
The dressing cancelled out the slight metallic flavor in the pineapple slice, and the cream cheese noodles on top cut the sweetness down just a bit. If you got pineapple, cheese, and lettuce on each forkful, the whole combination was really good. However, those who find little presentational individual salads unnecessarily fussy can break up the pineapple rings and do this: