Love is in the air here at A Book of Cookrye! By that we mean our roommate has given us more reasons to go downstairs a lot. As often happens when love is in the air, things are about to get jiggly and things with electric motors are getting involved!


Who on earth is Mary? The only other name attached to any recipes in this cookpamphlet is Ann Pillsbury (a knockoff Betty Crocker- can you guess what company made her up?).
Some searching yielded the fact that apparently every recipe in this book that doesn't have some brand listed in the ingredients comes from random employees of the mixer company that printed it. Maybe Mary was the primadonna of the Dormeyer mixer factory.

At any rate, this recipe is ideal for us at A Book of Cookrye, for we are going to be downstairs for quite some time.

We actually were just going to make the custard because homemade vanilla pudding is better than we who usually get it out of the box give it credit for. Then we got to the last line of the recipe: "Cool and serve on Snow Pudding." What the heck is a snow pudding? Oh, thank goodness. They put a recipe right under the one for custard. We're saved!

If you leave out the gelatin, this is a pretty good batch of lemonade. It also tasted a darn sight better than a box of lemon Jello. While it waited in the refrigerator, this happened.


The custard curdled before it really got thick- which may be the price for doing it with powdered milk.

However, cooking the custard turned out to take just the right amount of time for the gelatin lemonade to start look like this.

However, the snow pudding actually looked like snow! I'd expected the lemon juice to turn it into yellow snow, but nope. It's so pure and white you just want to give someone the powdered doughnut treatment.

So, as per recipe directions, here is custard served on Snow Pudding!

...great. Now it looks like yellow snow.
The snow pudding was a lot better than the custard. It was like someone took the top off of a lemon meringue pie and served it up on its own- it's so light and lemony. You could skip the custard and lose very little with this recipe- it hid the lemon flavor and didn't add much to replace it. Although admittedly, the floating island someone suggested did look really pretty. 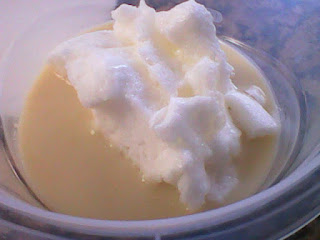 Also, usually things like this deflate pretty quickly, but this stayed well-aerated for days in the fridge. It didn't sink at all. Who knew gelatin could hold things up so well?