Ever had a perfectly good casserole and thought "This needs more meat"?


Yes, we at A Book of Cookrye, aided by the iffy discounted meat bin, decided to alter the stuffed cabbage recipe yet again. First, we turned it from a stuffed cabbage to a baked salad thing, now we're going to make it good! How, you ask? We're doubling the meat and halving the cabbage!
Also, we got some 75% of steaks. Now, a lot of people may object to cooking an entire tray of steaks until well done, but please keep in mind that when we bought them, they looked like this.

Also, we thought about using the tiny tablespoon of parsley, but no one sells fresh parsley by the tablespoon so we'd have the rest of a big bunch of it lurking in the refrigerator. Besides, that was a tiny allotment that you could barely taste. 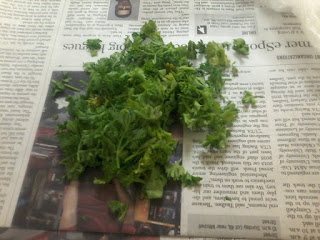 Anyway, those of you who object to seeing fully-done steaks may flinch at this next image. However, just scroll up and ask yourself if you would have eaten these raw. When you are restricted to buying meat that's heading from "we could pass this off as aged" to "cook this the night you get it home," this doesn't seem so much like a desecration as it does a way to not get sick. 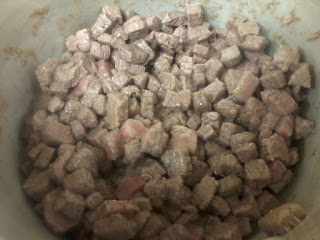 The rest of this was pretty straightforward, and we ended up with a decent amount of meat and such layered with the cabbage. Also, it only required one casserole. You can kinda see the stuffing under the cabbage, which means we didn't have to skimp on either. 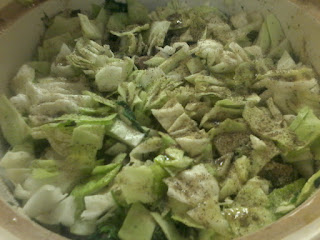 And, having turned an unnecessarily laborious recipe into a decent one, we present.... this!

Depending on your mood, it looks like either a really lovely plate of food or something that gets splotted onto your tray in some miserable school cafeteria. But you know what? It's really good. And unlike last time, you can have it for supper and not be hungry 10 minutes later.
Posted by S. S. at 1:39 PM