Carrots keep ending up in the Book of Cookrye kitchen. Sometimes it feels like some divine force decided it is our purpose in life to try every carrot cake recipe we can find. I can think of no other reason these would have wound up in our hands. 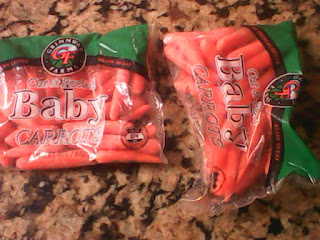 As previously mentioned, our school is hosting a lot of summer camps. They usually leave out any surplus lunches so that starving engineering students may help themselves. We would like to point out that you're daft if you expect a swarm of nine-year-olds to be contented with baby carrots. And these are the sad, runty-looking skinny baby carrots, too. Our point is, we're not surprised there were leftovers, and (having peeped into the classroom) we are not surprised the kids did not exactly look happy to spend a day at junior engineers' camp. It may not have been the lunches, though. As soon as people come into the engineering building and that distinct smell of unwashed grad student hits them, you can see their moods deflate. Perhaps even children are subject to misery by osmosis, especially when you corral them into a windowless classroom with way too many fluorescent lights. Sometimes I want to go in there and tell them to change their career plans or this is their future.

On that cheerful note, we present...


We've perpetrated ten carrot cake recipes so far. Of those, we've found exactly two that were good. One of them was really easy, the other one involved grinding up a lot of almonds. We've done a lot of hunting online for new recipes, but most of them seem to be variations on this one, and pan after pan of cake-like paste gets old quickly. This isn't a new recipe so much as a suggestion we got: someone told us that carrot cake is a lot better if you replace part of the carrots with pineapple.

Maybe it's masochism, but the more failures we get from making carrot cakes exactly according to recipe directions, the more we want to see if yet another recipe will be any better. So many people keep making carrot cakes, yet so many are so bad. We have a 20% success rate with carrot cakes. We've wondered with ever more confusion why do so so many lousy carrot cake recipes keep floating around?

We at A Book of Cookrye have inadvertently made a lot more carrot cake recipes than anyone in their right minds would do, and our trained eyes told us that this one might actually be good. If not, the carrots were really bland and pathetic; therefore, we didn't waste any particularly good produce.


Speaking of flavorings, did you know that while Americans use cinnamon nearly exclusively in desserts, Indians almost never do? At least, that's what one of my friends from India told me. Cinnamon in India is used in spicy foods, not sweets. You just never know what is unusual about your country until someone brings an outside perspective. This makes me want to find a not-dessert recipe using cinnamon just to see how it works.

The only thing that left us uncertain was putting cinnamon and pineapple together. But you know, if that's the worst a recipe can throw at us, it's not even trying. I mean really. If you're going to try to frighten me with a scary recipe, you'll have to come up with something worse than heavily sugared kidneys. And honestly, I actually liked those. So, the point is, cinnamon and pineapple is odd, but I've seen stranger things and eaten the leftovers.

Incidentally, we're for once not using real vanilla. We used to scoff at the imitation stuff, but reading some of the more level-headed arguments on the subject led us to decide that spending extra on this is pointless. We at A Book of Cookrye will save our funds for when the genuine article either tastes better or actually provides some form of sustenance. Using imitation vanilla instead of the genuine article never gave anyone a vitamin deficiency they didn't already have coming. (However, it is a lot stronger than we're used to; adjust the amount you add accordingly if you switch over.) Besides, even if you think real vanilla is a lot better, wouldn't you rather save the good stuff for the recipes you're dead certain will be good?
Our opinion at A Book of Cookrye: the artificial stuff tastes a lot more like people's idea of vanilla. Think cherry-flavored things vs. actual cherries- only nowhere near as different. Oddly enough, imitation vanilla seems to be sweeter than actual vanilla. Then again, we didn't subject ourselves to a blind test, so we could be talking hokum. The two might be identical to those who are completely unawares. 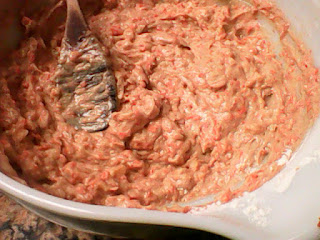 Don't ask me why, but I found this to be a lot more amusing than it should have been. The carrots and pineapples have begun advancing over all previously unconquered territory...


Actually, it doesn't look too bad once it was spread around. Or have we at A Book of Cookrye made so many carrot cakes we're numb to the sight? Also, you could barely taste the pineapple in the batter. 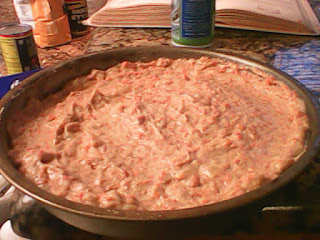 This baked into something surprisingly delicate. You know how you can test cakes by seeing if they spring back when you try to make a dent in them? We had to press very lightly to test this one. 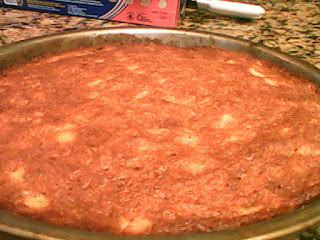 As for the results: We never thought we would have a use for the phrase "subtle use of pineapple." This tastes like spice cake. Sure, you can tell there's pineapple in it, but neither it nor the carrots are particularly strong. One of my friends thought it was just a cinnamon cake. It's a really good spice cake... with subtle use of pineapple.
In conclusion, I'm astonished to report that this carrot cake recipe is actually good. Seriously, try it. 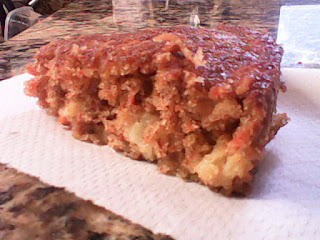