Today, we at A Book of Cookrye continue our salute to Grace Coolidge!

We previously discovered that if you put pineapple juice pudding on top of lettuce, you get a surprisingly nice salad. It may not be a particularly healthy salad, but it tasted good and involved lettuce. Today, we are cracking open the Woman's Club of Fort Worth Cook Book to make...

I'm sure a lot of people who seriously collect cookbooks find duplicate recipes often, but we have very few books. We get a lot of ours from the library or (in the case of the ones old enough to pass into public domain) find digitized versions on websites like Michigan State's Feeding America. In fact, we found the Woman's Club of Fort Worth Cook Book in the library's Special Collections (we thought it was just out on the shelves until we re-checked the catalog a few times), so finding the same recipe repeated in a book we actually have was really spiffy.
Anyway, what better way to start a coffee recipe than making a big pot of the stuff?

Incidentally, and this shows the fickle nature of collecting stuff, collectors of vintage kitchen stuff are not frantically outbidding each other to snatch up percolators. This exact model showed up on I Love Lucy, and cost us as much as you'd expect to pay for a beat-up coffee maker. Chipped and scratched plates may go for $500 if they have the right stamp on the bottom. An old rolling pin may fund your retirement if it has the right flour company's logo on it. But if you have a vintage percolator and want some serious profit, you need to have the thing in the original packaging with the original instructions and warranty slip still blank.

Like many people in engineering school, we at A Book of Cookrye always welcome new caffeine delivery systems.

You know what? The eggs and gelatin are a bit unusual, but at this point we could put this on ice and drink it. Heck, we could claim that our powder-shake drinking friends' ideas finally got through to us and now we want protein our drinks. Heck, maybe we could kick off an entire trend of eggy coffee among lunkheads. 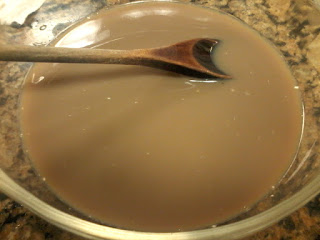 At this point it we're supposed to heat the coffee in a double boiler before adding the yolks. We skipped over that since it was already the temperature of hot coffee. Right, you! turn into custard! 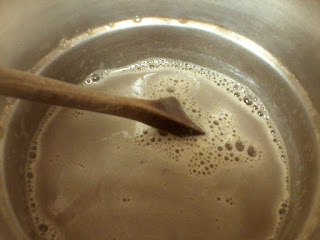 ...or not. It was still really runny 20 minutes later. We took it off the stove anyway lest it start tasting like coffee that's been sitting in the pot all day. Hopefully, the gelatin would kick in upon cooling and make this actually set.

It never fails to amaze me that if you flog egg whites with a mixer for long enough, they turn into this. 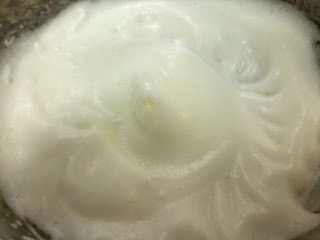 This looks like it'll be pretty good, but who knew a coffee soufflé would turn out to just be coffee foam? "White House Coffee Soufflé" sounds so grand compared to what we now have a bowl of. Maybe this was a bigger deal when this recipe was published; refrigerators were still a novelty. Bringing out a chilled dessert was a lot more impressive than it is now. 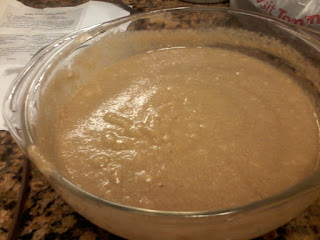 However, there was some separation in the refrigerator. If you were planning to unmold it and make a fancy plate, it'd look like a sort of glaze on top. Since we were too lazy to bother with this unmolding business, we stirred it back together once it was semi-set. If the idea of a layered-looking coffee soufflé bothers you, you might want to wait until it's been the refrigerator long enough to be really thick and syrupy before beating and adding the egg whites.

We tried to scoop it out like ice cream, but it held its shape as well as you would expect a somewhat limp gelatin mold to do. Have you ever had your coffee quiver on the plate? Well, maybe it's a good sign that your dessert gives itself caffeine jitters.

You know what? This is pretty good! If you like the iced coffees from doughnut shops, this recipe is for you. Although it later occurred to us: if you rearrange the ingredients a little, you get a cup of coffee made to Book of Cookrye standards and a plate of scrambled eggs. Don't you love it when your dessert is also part of this complete breakfast?
Posted by S. S. at 1:51 AM