Oh, liver. Why can't you at least taste decent? Liver torments us at A Book of Cookrye, for despite being ridiculously cheap, it tastes like liver. Continuing our search for decent liver recipes, we're going to cook it 1920's style! Today we're making...

Yes, today we're seeing if the Woman's Club of Fort Worth can make liver into a tasty treat. If nothing else, this should be easy to make.
You know, we at A Book of Cookrye had high hopes for this recipe. Look at what goes into the casserole with the liver. If we were putting any other meat in here, you just know it would end up being divoon. As it is, previous experience recommends the combination of mushrooms and liver, so this recipe might still work.


As a brief recipe note, we put a slice of bread in the oven as it warmed up and pulverized it. We could have bought bread crumbs, but then they'd have sat in unused and gone rancid. 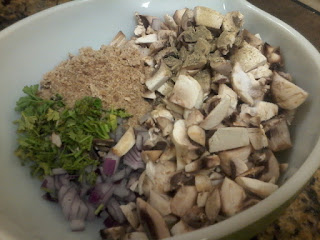 As aforementioned, we could have used stew meat for this and it doubtless would be really good. Instead, we dumped a heap of liver into a perfectly innocent casserole that never meant us any harm. 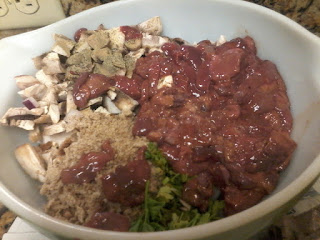 When you could secretly swap out your casserole with a couple cans of dog food without changing the look or smell, you may or may not want to have a backup supper on hand. 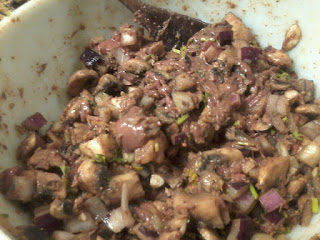 We really wanted to like this casserole. Like, really wanted to. We even made a point of not eating all day (not hard since we were either in class or at work the whole time) so that we'd have to at least eat one full plate of it before getting fed up. Hunger may be the best sauce, but it couldn't do much for this. 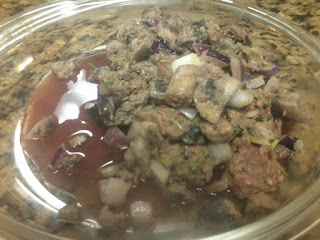 Despite spending 45 minutes in the oven, the onions were still raw. All right, fine... we put raw onions on barbecue sandwiches all the time.
However, the liver on the surface somehow managed to get overcooked while the onions remained raw. We could have choked this anyway until...  er... please note the color of the liver piece at about four o'clock.
Yep, the liver in the center of this thing was raw. How the heck did it manage to stay raw despite cooking for 45 minutes? Have you ever accidentally gotten a mouthful of raw liver?

There's nothing wrong with having peanut butter sandwiches for supper every now and then.
Posted by S. S. at 1:45 PM