Guess what we got!

Yes, indeed, the apples from the camp lunches we helped ourselves to were so runty, shiny, and hard, we decided to bake them instead to hide their weirdness. But what might we do with them?


Looks pretty straightforward, doesn't it? However, we were confused at the sugar dissolving in the apples. What is is supposed to dissolve in?

The answer: Some leached-out apple juice! One of my engineering friends said the word we're looking for is "hygroscopic." (I looked up the spelling.) It means the sugar absorbs liquid so readily it drew the juice right out of the apple pieces. The point is, that syrupy stuff the apples are floating in tasted fricken amazing. 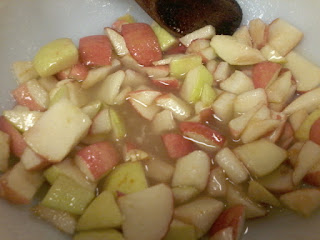 The recipe said the sugar should completely dissolve, but we could only wait so long. It was mostly dissolved, at least. We could only go so long without drinking the divoon hypersweet apple syrup. 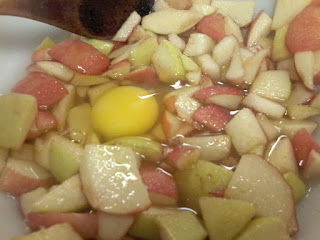 Upon deciding the sugar was dissolved enough, it took all of five minutes to dump in the rest of the ingredients and stir.

We decided after the fact (and because some turned up in the kitchen) that this needed some raisins in it.
Now, about that glaze... if sugar can dissolve in apple pieces, presumably this will turn clear if you cook it long enough, right? 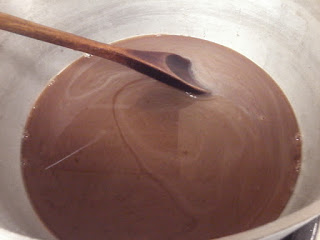 Well, it turns darker. And if you tip the pot, it's clear-ish. 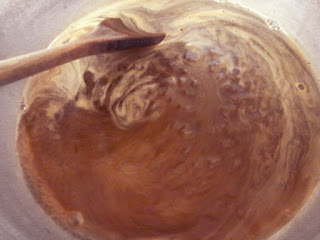 Now, we at A Book of Cookrye were a bit thrown off at this cake containing no butter, shortening, or anything else of the kind. Angel food cake has none whatsoever, but it comes out really spongy. Apparently we're saving all of the butter for the glaze.

There's a lot of glaze for this one cake. We inadvertently made a post-modern tablescape. 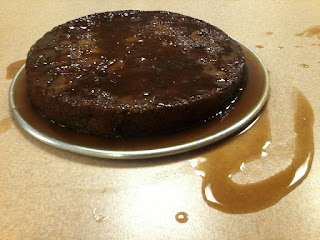 To me, this tasted like Christmas breakfast. However (or perhaps therefore), this had a powerful effect on all of the men who happened to be downstairs. This thing fricken disappeared of the pan. One person even came over to smell the pan and set it back down.  Someone else offered to buy maple syrup to put in the glaze next time. This is powerful stuff, people! 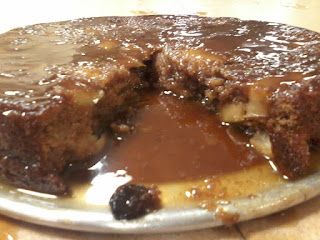