Did you know wine goes rancid? We at A Book of Cookrye didn't, but then a bottle someone gave us started to smell foul. Therefore, we at A Book of Cookrye decided to drink the wine left over from the boozy pork chops before it had time to turn into depressing vinegar.
However, we do not like wine. So the next time we had company over, we decided to simultaneously use up the wine and the rhubarb (apparently it's always "rhubarb" and never "rhubarbs") lurking in the freezer from the Pieathlon. Taryn at Retro Food for Modern Times suggested in the comments we use the rest of it making Rhubarbaritas from Splendid Table. If we use wine instead of tequila, does that make it more of a sangria? Well, we have wine already, so whether it's a sangria or just wine with training wheels, we're drinking it!

We tried some of the syrup as it boiled, and it tasted exactly like jamaica tea. Also, all the color went right out of the rhubarb, leaving a heap of sad brown stuff. 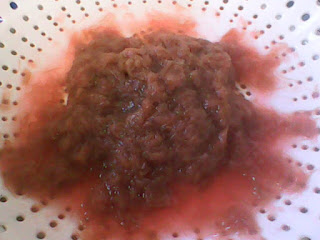 However, we now had a tiny little puddle of lovely magenta syrup! It really tasted like hibiscus tea. If you live near a grocery store aimed at the Spanish-speaking market, get a bag of dried hibiscus petals from the tea section and you can make this a lot faster and without this business of straining things through a rag.


The consensus: It's a girly wine drink. However, it's a really good girly wine drink. If rhubarb grew here, we'd make this more often. As it is, we have plans to make jamaica sangria because it'll probably taste exactly the same. 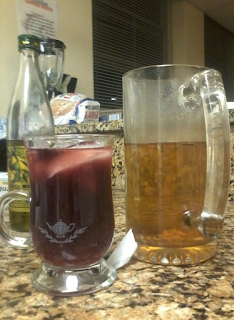