We at A Book of Cookrye have been pondering coffee. Also, it's the middle of the night and we're making a pot of it.

As we've previously dissertated, we require heavy amounts of condiments to make coffee drinkable. A coffee made to Book of Cookrye standards tends to look like this: 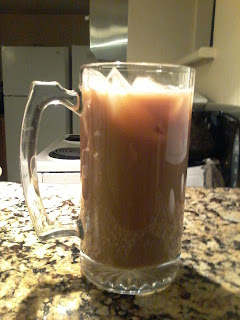 We're between sessions right now (spring classes are over and summer hasn't started yet), which gives us time to think- straight, unsweetened chocolate tastes unbearably bitter to most people. However, when heavily sweetened, it becomes divoon to most of the world. This thought led to...


When we at A Book of Cookrye make coffee cake, we take the notion of coffee cake literally.
The first thing to do of course is turn the coffee into cold coffee. We at A Book of Cookrye don't know why it's supposed to be cold when you add it, but for some reason we suspected it should be. However, we didn't feel like fetching out a plate to cool it on.

One of the nicer things about where we're decamped for the summer is that it has smaller lights right over the counter. After spending all day working in an overlit and fluorescent space, it's nice to come home and be in dim light. Honestly, spending enough day in such excessively bright places make us wish we could do everything by candles or gaslight without running afoul of fire codes.

And now, we turn this from a regular cake into a coffee cake! Either that or we had an oil spill into the cake batter.

This cake was an odd color. I never thought it would be odd, but it was. It's not a yellow cake, but it's not dark enough to be a spice cake or any of the other cakes that come out a brown color. It's kind of... beige. Like, you think you're looking at a white cake that for some reason has been dimmed. I know it looks fairly dark in this picture, but I assure you it wasn't. 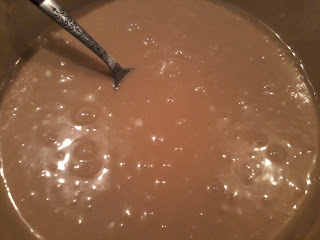 Perplexingly, the kitchen smelled like chocolate chip cookies as this baked. Where did the chocolate come from? Also, the top of this was oddly sparkly after it came out of the oven. 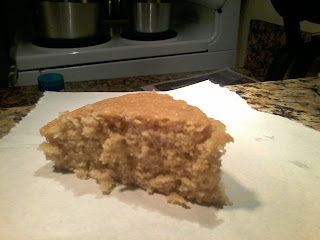 Yeah, the odd color shows up better now that it baked. It almost looked like a color correction mistake happened to a slice of yellow cake. Silly photo editor, the cake was supposed to be that color! Why did you darken it?
The cake tasted like sliceable iced coffee. We at A Book of Cookrye loved it.
Posted by S. S. at 5:03 PM