Today, we at A Book of Cookrye have something very special-- one of my great-grandmother's recipes! ...Well, sort of. She never wrote anything down. She was always up for showing you how to make things, after the fifth or so "You do this until it looks like that" or "You'll know when it looks right" before she'd finished measuring ingredients into the bowl/pot/skillet (she may or may not have been using actual measuring cups depending on what she was making), note-taking would prove kind of infeasible. She could also roll tortillas into perfect circles, which no one else has been able to do since. She did show my Mom how to make a lot of her dishes (Mom lived with her when she was going to college right by her house). Which brings us to....

That's a lot of spice shakers, isn't it? Anyway, There are two things that she said you must do for the rice to be good: cook it in a little splash of oil over very high heat until it gets really brown, and later on, add a lot of cumino (yes, in English it's cumin, but the English word never looked right for some reason).

Now you get to add the rest of the stuff to the rice! She had her own garden so she would chop in her own vegetables. We at A Book of Cookrye have... well... a windowsill. Therefore we bought them instead. There's the two bell peppers and the onion already there, and now we've got all these tomatoes.

A lot of times, we don't feel up to all this chopping up of stuff. Mom often puts in picante sauce at the same time as the water (about one-third cup sauce to two-thirds cup water) instead. But get one that's good enough that you'd like it straight out of the jar. Or you can buy some pico de gallo and that way all the chopping is done for you. If you do one of those, you can skip straight from when you cooked the rice brown to here.

If you're using fresh vegetables, you'll want to add a little less than two cups of water to every cup of raw rice. If you used hot sauce, you'll want to add a bit more than two cups of water and sauce combined to every cup of rice.
And now, this is the part where we at A Book of Cookrye got a little stumped. You see, usually when we make rice, we're at home and just pull everything out of the spice cabinet that looks about right. However, we're not at home so we had to stare at the spice rack at the grocery store and try to figure out what looked right. Then you measure the spices by seeing how big a pile of each you have floating on top of the water. This amount of seasoning is about right for one cup of raw rice. 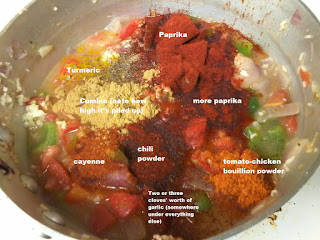 At this point, you stir everything in and see if it tastes right... 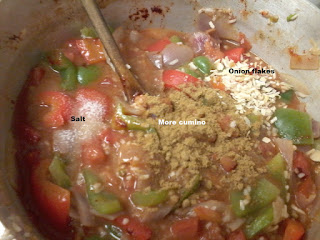 Some further corrections might be needed. Also, more salt. 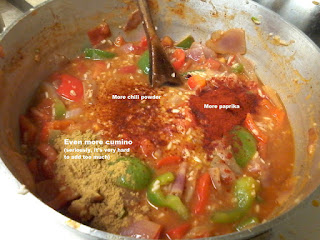 You can add, omit, or change the spices to your taste or what's already in your spice cabinet, but do not leave out or skimp on cumino. You almost cannot add too much- we had a quarter of a shaker in the pot. You probably don't want to leave out the paprika either. The rest is up to you. Also, you can leave out the bouillon powder if you replace some of the water with chicken stock.

Bring it to a boil, give it one last, very vigorous stir to dislodge anything stuck to the bottom of the pan lest it burn, and leave it to simmer without opening the lid for about 20 minutes. If you want to make your whole dinner in a single pot, you can stir in some cut-up meat just before you cover the pot.
Be sure you don't accidentally turn the burner too low like I did and find the rice didn't cook at all. That means you have to wait another 20 minutes, and by now you're probably really hungry. 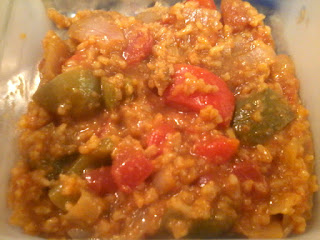 Sometimes I think my great-grandmother is watching over me when I make any of her recipes. The rice always comes out the best way for what we're making. Like this time, when I ended up being too busy to make supper for a couple of days later. Usually the rice shouldn't have that extra gravy still in it; it should have all soaked in. But since the rice came out like it did, it microwaved without drying out. Also, for some reason, even if you start with a small handful of ingredients, there's always enough for whoever came into the kitchen to have as much as they want.
Posted by S. S. at 2:29 AM