We at A Book of Cookrye received a marvelous gift from our parents: fajitas! Having failed to plan ahead, we tore the bag too much to possibly reuse and ended up raiding the janitor's supplies to refreeze the rest..

You may have noticed that we did not call this "chicken and waffles." That is because we at A Book of Cookrye decided that waiting for everyone to finish using the stove to cook was taking too long (that's what we get for trying to eat in the middle of the day). So, guess what we pulled into service! 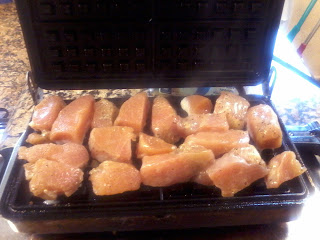 This worked marvelously well. The only problem is that the drippings didn't drain off. If we were cooking something that actually did have a lot to drip out of it, we'd have had to carefully tip a loaded waffle iron sideways and hope it poured (at least kind of) neatly.

As for the result: The top side got browned really nicely (although with more of graph paper marks than grill marks) and the bottom got steamed from all the marinade and stuff that came out of them. Also, and more importantly, this took about one third the time it'd have taken to do them in a skillet. 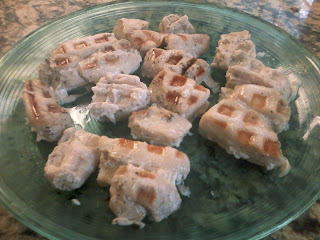