Summery Second-Stab Saturday: 1800s Catchup without all the effort

We at A Book of Cookrye previously made a batch of tomato ketchup from one of the earliest recipes for it ever. As much as we liked it (who knew a spoonful of ketchup would improve a pot of soup?), it was a pain in the ass. Therefore, with summer icumen in, we did this:


Indeed, we at A Book of Cookrye decided that the recipe for homemade ketchup was good enough to attempt again while trying to take all the excess work out of it. And had we had a stick blender, we could have. We tried liquefying the tomatoes in a regular blender (well, some knockoff Magic Bullet someone abandoned in the kitchen), but this happened.

We at A Book of Cookrye considered the possibility of chopping all the tomatoes by hand, but only briefly. 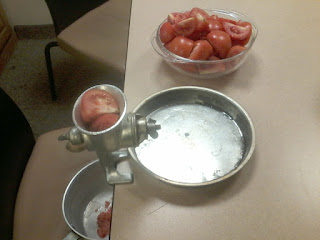 We would like to know what Miss Leslie would think of us skipping all the tedious business at the front end of her original recipe. On the one hand, she may appreciate having reduced the prep work to a matter of minutes. She did cook for her mother's boarding house, after all. On the other hand, a lot of her recipes read like she's saying this is the only correct way and only cooks in inferior houses would deviate.

Anyway, having skipped all the boiling, skinning, and juicing of tomatoes, we could get straight to the part where you just leave it on the stove.

At first the really long cooking time threw us off, but then we realized that this doesn't need to be babysat. Heck, we didn't even need to be in the kitchen! 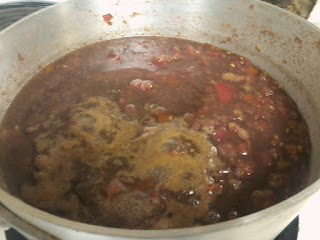 So, when we failed to have a stick blender, we'd thought that... well, I don't remember the exact thought process, but it involved "chunky tomato" and "homemade charm." Neither of those held up in front of a pot of brown barf. 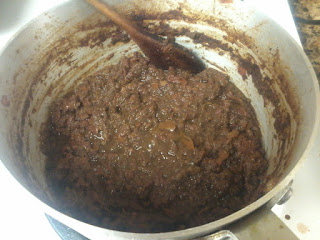 Fortunately, the same blender that couldn't handle raw tomatoes could finally handle this.Granted, there's still little tomato-skin flecks and seeds floating in it, but we at A Book of Cookrye decided that they could just stay there. 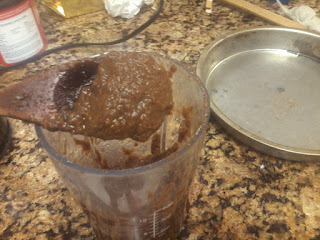 All the tomatoes yielded a spaghetti sauce jar full of homemade tomato sauce plus a baggie of surplus.

However, the rest of it fit very nicely in this and will make a lot of things taste divoon. And it required very little effort unless you consider leaving a pot on top of the stove to be a lot of work, so hooray for homemade catchup! 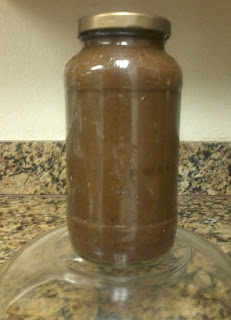