Did you think we at A Book of Cookrye were through with carrot cakes?


There's just something about carrots that makes me want to put them in a meat grinder. Although why we keep trying carrot cakes is a mystery. For the record, we have to date tried nine and only two have been good: the really easy one and the one that involves grinding almonds.

We're not just using a little bit of mayo. This cake calls for a great big blob of the stuff. This is not as daffy as it first seems. There are actually a lot of mayonnaise cakes floating around. Since mayonnaise is mostly eggs and oil, apparently you can just substitute it right in and have cake.

Normally, one sees this at the beginning of one of those artery-clogging casseroles. You're supposed to add your canned soup, vegetables, and whatever else to the mayo and bake until bubbly. Well, vegetables will be involved in a minute. But first... 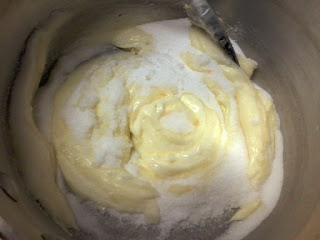 We have mayo-sugar sludge! At this point, I had to pause cake-making to taste this and see if it's worth committing the rest of the ingredients. I have another carrot cake recipe and it has pineapple in it, so why am I making one with mayo? Did you ever realize how pungent mayonnaise gets when you have a really big bowl of it radiating mayonnaise stink rays? 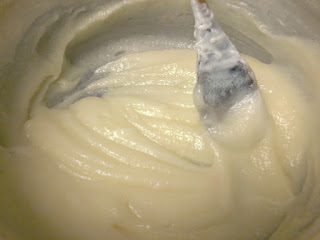 To the surprise of literally everyone in the kitchen who tried what lurked in the bowl, it was actually... good. It tasted like what would happen if someone wanted to make a cheesecake and had about $3.25 for ingredients. At any rate, we at A Book of Cookrye decided we had it in us to stay the course.

All right, we have successfully(?) concealed the mayonnaise in a half-finished dessert. Let's bring out the carrots and ruin what we have just done! 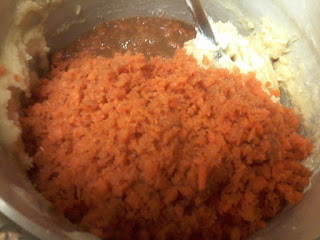 We also put in the juice that dripped out of the back of the grinder as we turned the carrots into carrot shrapnel- it's the puddle that goes from ten o'clock to twelve thirty. Why does carrot juice look like sewer water? With that in mind, doesn't the cake batter look like a taste-tempting treat? 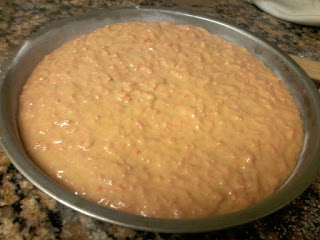 Despite containing more mayonnaise than a potluck's worth of tuna salad, this actually became a seemingly normal carrot cake. 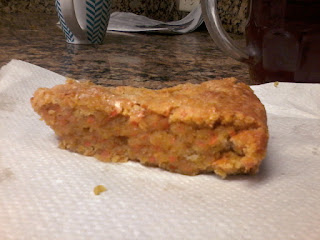 What, you thought it turned into a nice cake? I said it ended up normal for a carrot cake (see example here). Therefore, it was a weird gummy cake-paste that turned paper towels clear after sitting on them for thirty seconds. 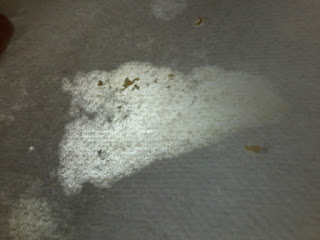 It didn't taste too bad, and getting the rest of it out of the pan made us at A Book of Cookrye consider making cake balls out of it. However, we did not feel like salvaging a carrot-mayonnaise grease ball. My hands were shiny from scooping it out of the pan. We might save this recipe for if we ever feel like we reeeeally want to bother with tediously dipping cake balls, but we didn't save the cake.