Porcupines! or, How to make one package of meat fill an entire casserole

Today, we at A Book of Cookrye are making meatballs! However, we aren't making just any meatballs. Normally, we take meatballs very literally. Aside from some seasonings, we make ours with nothing but meat. But today, we figure if anyone would know how to stretch meat, it's people living in the Depression. Therefore, we're consulting Mrs. George Thurn's book again and perpetrating this:

We at A Book of Cookrye were going to use raw rice, but we ended up cadging this off of a friend instead. 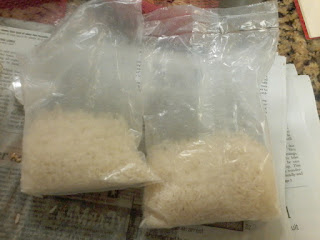 People have been adding bread crumbs, crushed cereal, and such to meatballs for a long time, so why does rice look so weird here? 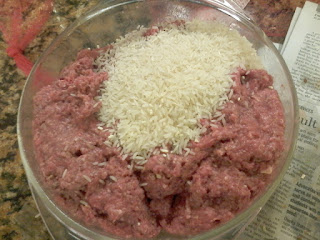 But you know what? There's a Depression on, and this made one tray of meat nearly fill a bowl.

We at A Book of Cookrye made an executive decision at this point. We do not like canned tomato soup enough to let this much ground beef stew in it, even if we did just cut it with a lot of rice and such. We used spaghetti sauce instead. 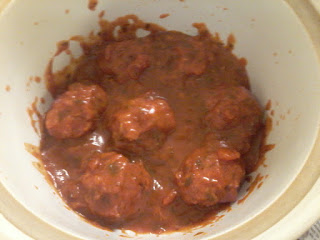 And no, we're not kidding when we said this really stretched out the meat. As you can see, we ended up stacking the meatballs and they barely filled our really big casserole. Admittedly, we accidentally ended up doubling this recipe when we checked the meat label and realized it was twice as much as called for (Wheeee! Surprise meat!!), but this is a lot of meatball. We ended up layering them with sauce on top to possible keep them separated. We had no idea if they would remain meatballs or if they would merge into one massive casserole-sized wad of meat, spaghetti sauce, and rice.
We then realized that they weren't supposed to bake for 35 minutes. It's 35 minutes with the lid off and another 35 with the lid on. That's seventy minutes! 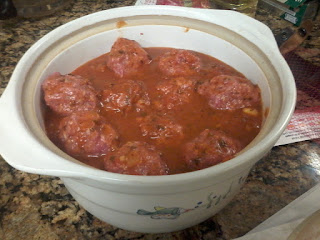 Look at the little bristly porcupines! Incidentally, someone asked what I was making when I pulled this out of the oven. Upon my answering "porcupine balls," he thought I had procured porcupine meat. Meanwhile, I'm not sure how I kept from giggling every time I thought about the phrase "porcupine balls."

As you can see, the rice turned into reasonably convincing porcupine quills. 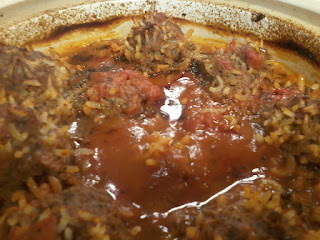 Also, quite fortunately, the porcupine balls had not coalesced into a massive porcupine. I understand it's always better when different balls stay separate. Putting them on top of spaghetti seemed redundant with the rice in them already, so we just dumped them out and got a fork. 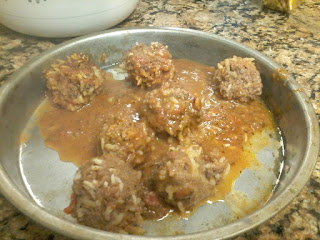 You know how rice tastes when you eat it last so you can mix it with whatever sauce, crumbled-off food bits, and other things fell back onto the plate? That's what these were. We liked them a lot. However, cook them covered the whole time. I don't know what cooking them uncovered half the time was supposed to do, but it meant the balls on top had crunchy rice sticking out of them.
Posted by S. S. at 2:21 PM