We at A Book of Cookrye are pleased to announce our newest feature: Second-Stab Saturdays! This is when we go back and have a second go at something that was disappointing but seemed like it was only a few revisions away from being really good. Or, like today, taking the leftovers from a disastrous culinary perpetration and seeing if they can't somehow be repurposed into something good. Like our other weekday-themed feature, this will be occasional and subject to no set schedule (other than always being on a Saturday).

You see, as... interesting as the primordial gingerbread was, I couldn't bring myself to waste nearly a whole pan it. Sure, people thought it was a pan of beef jerky. Yes, if you had more than one bite you felt like you'd swallowed a bag of concrete mix which then set inside your stomach.
But I just couldn't bring myself to actually throw it out. For some reason, it grew on me. As I tasted the conflicting flavors of rye, honey, and spice cake, for some reason I thought it would be perfect underneath a lovely apple pie. It was 6AM and I was extremely tired and therefore more likely to entertain such daft thoughts. I imagined the flavor of apples and tons of brown sugar permeating the ginger-jerky, tempering the rye, harmonizing with the honey...


And hey, if throwing more ingredients and time at something can produce tasty things out of orange peels, why not see if it works on gingerpaste?

If you take away the Tudor "gingerbread", this is my apple pie recipe. So if nothing else, having made this before, I knew everything above the bottom crust would be good. The only difference is I threw together a crumb topping of flour, butter, and brown sugar. Usually, when I make a pie crust, I take up the little scraps and pebbles that remain off the counter, rub in some sugar and whatever spices, and use that on top.


It came out bubbling away, meaning that hopefully the syrup had permeated the crust beneath. 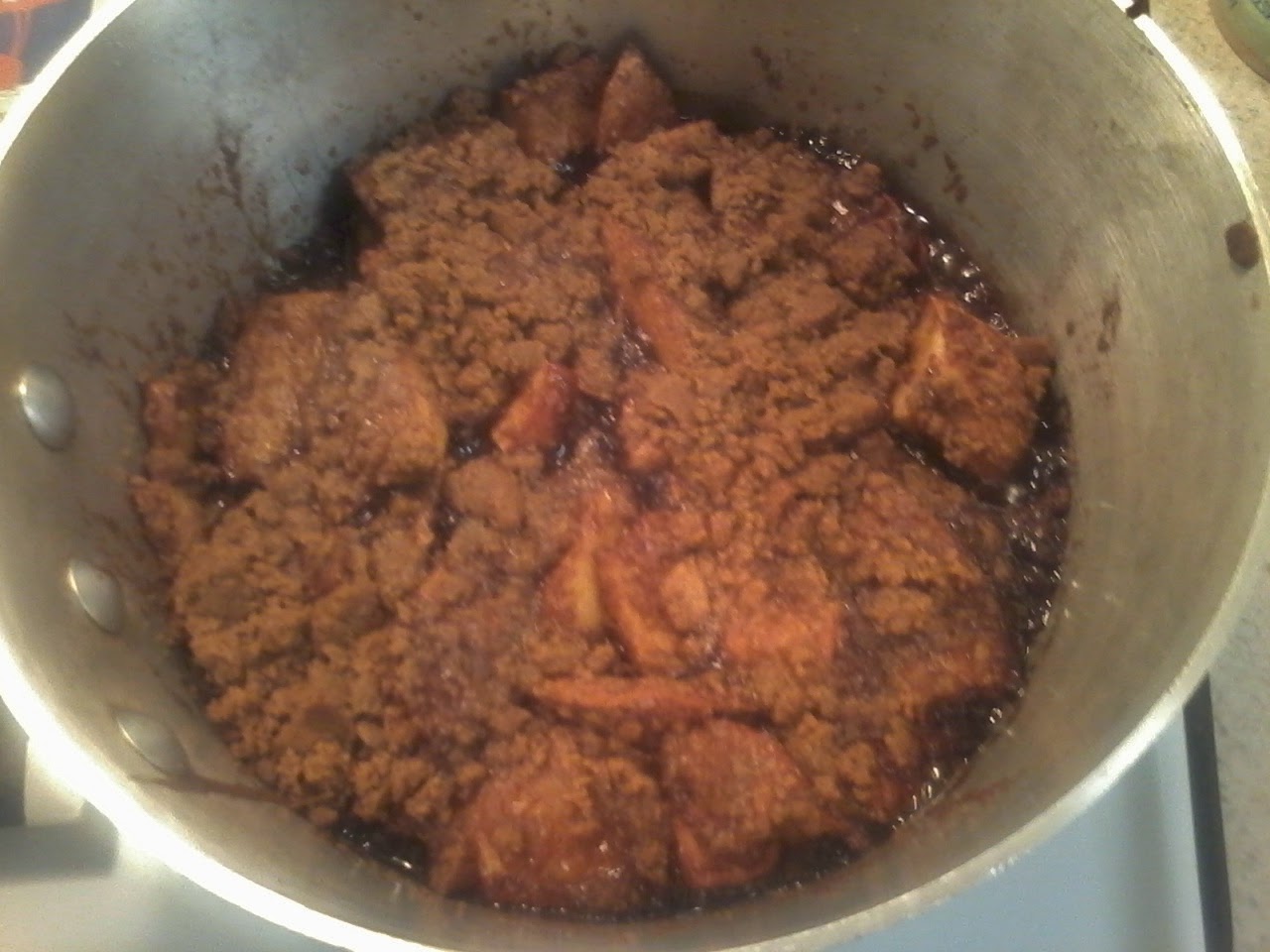 However, this thing did not want to slice. I had to bring in the Iron Spoon of Flirtation to cut through it.

Eventually, I got a piece on a plate. The harmless vegetable dye in the crust made it look like I'd put apples atop a slab of raw beef. Hmm... you know how these days it seems people who are seriously stuck-up about food want their beef as uncooked as possible?

But you know what? This worked. Somehow, it all added up. I don't mean the apple pie covered up all the taste of the ginger "bread" under it; somehow it was the last thing that somehow made everything else come together. Also, the boiling softened out all the gritty breadcrumbs.
I even took it to work and people ate it all.
So, you know what? I'm going to go out and say this is totally worth trying! Just... don't put red food coloring in the crust. And make it at most half the thickness that the gingerpaste was for this (hence cutting the crust amounts in half for the recipe).
Posted by S. S. at 7:04 AM