Today on A Book of Cookrye, we present a recipe that is really hard to name with a straight face. Perhaps in 1948, you could ask people if they wanted balls and get away with it. These days, when you say you're making something called orange balls, you get... er... interesting reactions. So, for this post, it would be easy to make lots of balls jokes. We will take the more challenging route: attempting to say nothing that could be misconstrued at all.


Anyway, we decided to save the peels when we made the Skillet Chicken in Butter Orange Sauce, crack open The Art of Italian Cooking yet again, and make...

Being on a really limited grocery budget, any recipe that makes use of what would have been kitchen refuse is enticing. Also, we got to use the meat grinder (twice)!

However, we did end up cutting the recipe in half since we only used 3 oranges. Also, because we were going to throw it away anyway, we threw the various pith scraps and such that fell off as we were peeling the oranges into the water. After all, why throw out food scraps when you can throw even more ingredients at them and possibly end up throwing the whole mess away anyway?

Having drained the orange peels, the soaking water was an odd shade of green. Stirring in about a spoonful of sugar produced something that tasted near-exactly like those really hoity-toity orange sodas in fancy bottles.

Had we had a meat grinder about three years ago when we got bored, pilfered about two pounds of oranges from the cafeteria, and made marmalade, we'd have probably been done in about half the time we spent. (At least that time it kept. We made another batch in high school, refrigerated the jars instead of sealing them, and the power went out for two weeks the next day.) 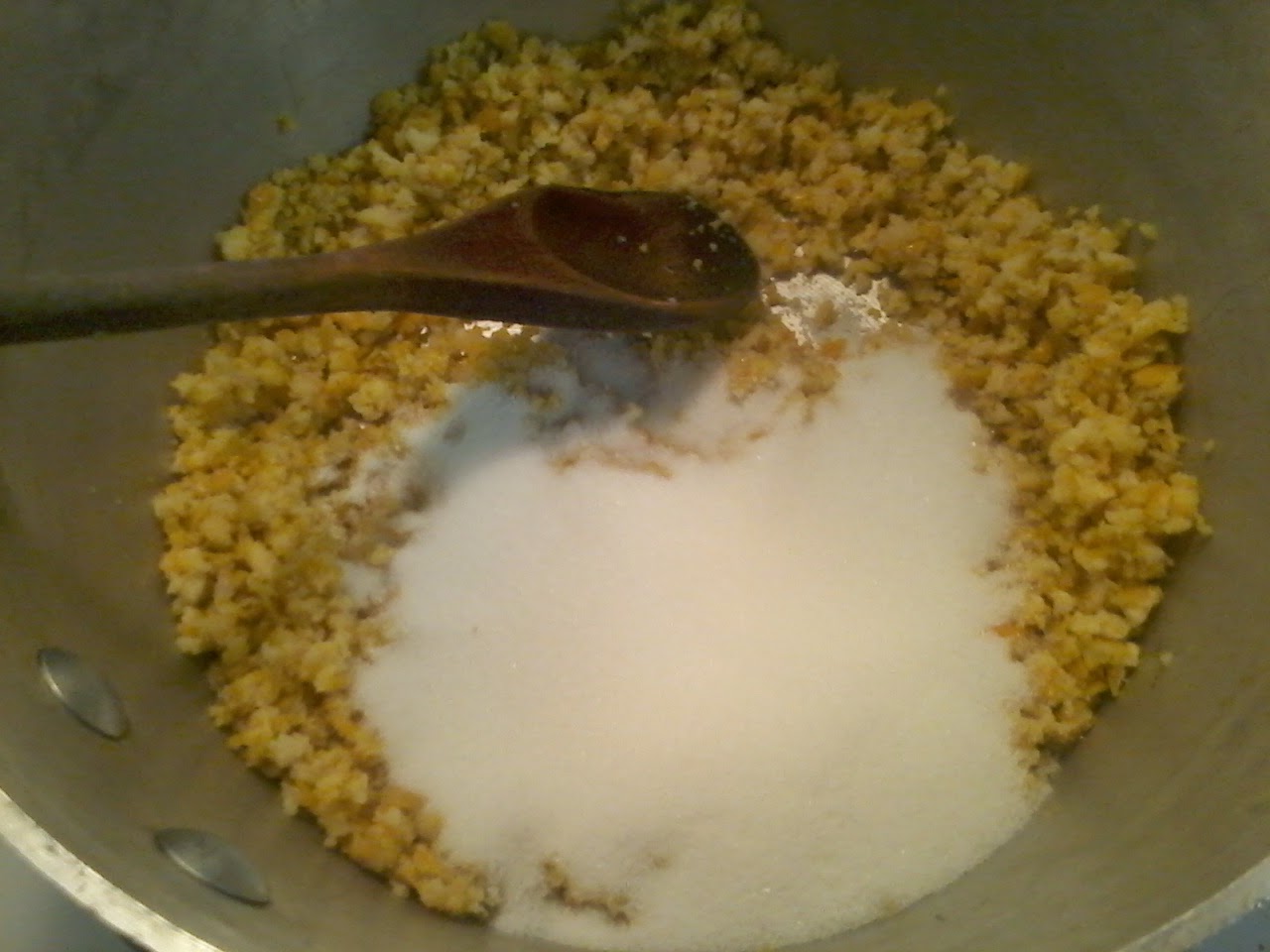 Here, we must find fault in the recipe instructions. A small quantity dropped into cold water never formed a soft ball; it dissolved into little orange flecks.

Holding out for a moment when it would remain a cohesive mass when dropped into water, we stirred hopefully until it was evident the peels were drying up. We either would have orange balls anyway or we would have inadvertently made "artisan" cake sprinkles.

However, we couldn't roll it in sugar and then in the nuts. The nuts wouldn't stick if we did. We ended up deliberately doing a lousy job of rolling them in sugar so there would be bare spots for the nuts to stick to.

As for the results, these are marmalade in finger-food form. Anyone who likes marmalade would really like them. They're not hypersweet, and they still have just enough of a bitter kick from the peels without being excessively so. The nuts on the outside went really well with the oranges- I'd thought it was just decorative and would have skipped that had I not already had nuts lying around.
It's still annoying that the recipe gave such a faulty doneness test, though. They're ready to take off the stove when they hold a shape when pressed into the side of the pot. Just forget about even bothering to try them in cold water.
In short, this recipe is a surprisingly good and cheap way to use the parts of the orange that usually go to the trash.

And so, in conclusion, I can't believe I got through this with all single-entendres. It got very difficult around "I had trouble getting the nuts to stick to my balls." Do try this recipe!
Posted by S. S. at 11:16 PM