Today, we're going to take my great-grandmother's skillet down off of the nail over my bed, take a recipe from the cookbook my mom's high school drill team published, and make...
this! 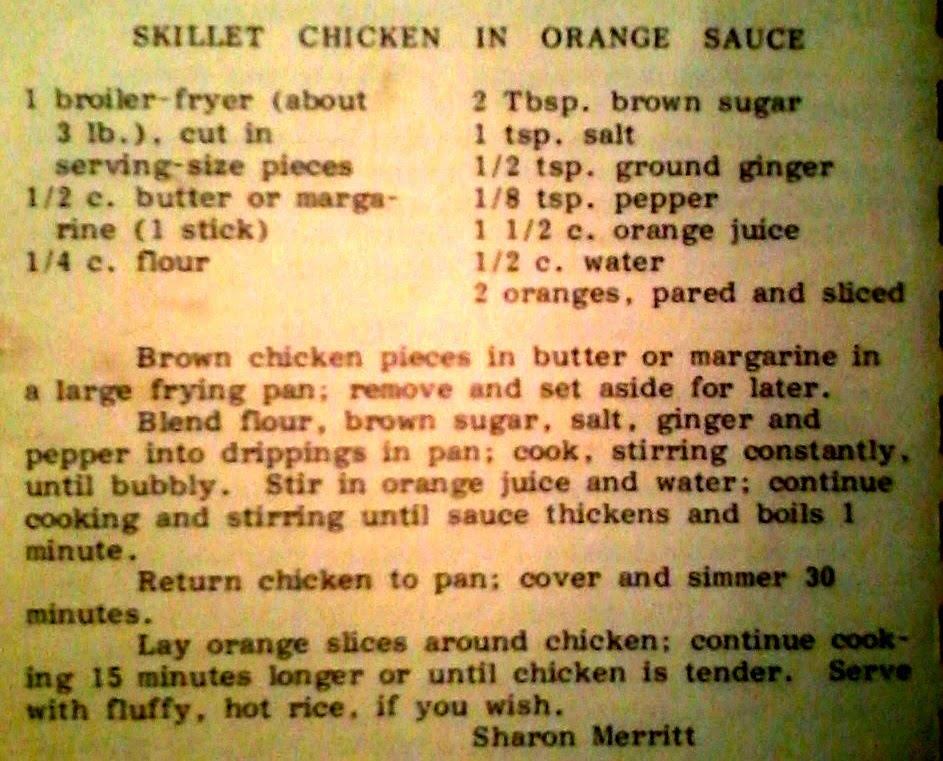 Why will we make this? Because we effin' love orange chicken. It's like sweet-and-sour chicken only it actually tastes like something instead of tasting like cheap sweet-and-sour sauce. I didn't think this would taste anything like Chinese takeout, but given that the most-used ingredient in the sauce is orange juice followed by two whole oranges, it looked like it'd be good anyway.

I must say this got a lot easier to afford since my roommate was so good as to sneak home some oranges and a bottle of orange juice from the cafeteria (which I never go to because it's so expensive you'd have to pinch two plates per visit to get your money's worth).

You know what? My only thoughts as I got all  the chicken browned was "Jee-crawling-hovah, that's a lot of butter!" So instead, I'll tell the story behind the skillet I'm making it in.
It was my great-grandmother's. When she and my great-grandmother moved the family to the United States, my great-grandfather went first to get a job, house, etc. She stayed in Mexico and refused to bring herself and the children to the US until he had provided her with a brand-new set of pots and pans and a stove she didn't have to build a fire in.

When she died, a lot of her things somehow ended up in the back shed including this pan. Eventually, bright-orange with rust, it was dumped on my mother who gave it to me since I'd been wanting one. My instinctive reaction upon seeing this was to throw it out, it looked so bad. My second idea was to hit the Free section of Craigslist and let someone else deal with it. Someone actually wrote back to persuade me not to chuck it that easily and that should I actually have the patience to scour and season it, I'd be glad I made the effort. Much to my surprise, they were right. I still remember when I first got it seasoned, looked it over, and thought "Holy crap, this actually is a nice pan!" It's also a really big one, which makes sense given how many people my great-grandmother had to cook for.

Unfortunately for my parents, this ended up leading to me reseasoning an awful lot of banged-up skillets (and a griddle) to give away for weddings and housewarmings the one year it seemed all of my friends got married and/or moved. I think I derailed dinner plans a few nights in a row by commandeering the oven for yet another pan.

As for this skillet in particular, it now hangs on a nail over my bed someone left in the wall. Hey, when you live in half a bedroom, these things seem a bit more normal.

While there were no problems browning it in batches, I did end up cutting the chicken up once I realized it would all have to fit in the pan at once. I was hoping a pan of chicken in orange sauce would be... well... orange.  This is a really dull shade of brown. It looked even duller by comparison when I put the orange pieces in.

Usually when something looks this bad, you end up telling everyone to shut up because it's good for you. However, that would only work on someone who hadn't peeked at the recipe.

But eventually it was done. And here's the delightful result!

But I can set aside how much butter went into this thing to actually assess what we've made. Edit: Besides, I saved it in plastic wrap and it made the best toast ever. It had a nice slight orange kick and some of the chicken taste had also gotten in there. I would make this again just to skim off the butter and have it on toast when I run out, and I don't usually get excited about toast. Seriously, make this, save the butter (rinsing off what flecks of stuff stick to it in a bowl of ice water- that way it doesn't melt as you're getting it clean), and try it on toasted whole wheat bread. You will be amazed.

This isn't chicken in sauce, this is chicken in soup. However, it was indeed really tasty and the most tender chicken I've ever had. However, the orange juice lost all its flavor in the cooking. Therefore, it tasted like chicken, butter, and the oranges that went into this. It'd be better if you cut the orange sections up. However, the sauce was good enough to be worth scooping up on toasted bread. It just wasn't as orange-y as I'd hoped it would be. A night in the refrigerator made it a lot better.
But there was one area where this recipe really didn't disappoint: Look at how many dishes I had after this, including getting out a separate bowl instead of eating out of the pan:

When you not only have to hand-wash everything but carry it up the stairs when you're done, a recipe that involves this few of them is definitely worth revisiting.
Posted by S. S. at 9:28 PM