Guess whose birthday was a few days ago! (Don't say anything if you read the title.) Yes indeed, it's Marcus' birthday! And to celebrate not yet being so old he gets asked how many years young he is, we are making...


Yes indeed, we're using one of Fanny Cradock's recipes. If you haven't heard of her, you should totally watch this (I've wanted to do reaction videos of people watching her specials for some time). This recipe seemed straightforward, though I have no idea why the heck I was supposed to preheat the powdered sugar.

And, proving that even the gods believe in birthday presents, I didn't burn Marcus' forearm with the edge of the pot when I dumped the powdered sugar onto the eggs as he ran the mixer.

The whole time we were making this, we were thinking of when Cecilia Gimenez (that's the lady who "restored" that Jesus painting in Spain) made an "appearance" on Saturday Night Live to say that her painted vision of Jesus was exactly how he appeared to her in a dream. "And poor Jesus, Jesus have broken his arm and it was wrap up in a little jelly roll scroll there!"


We ended up with a really thin, oddly flexible cake which looked like when you served it, you'd beg for forgiveness and say it's not your fault, it's the first time you tried this, it's not that bad, is it? (As a special Book of Cookrye bonus, imagine you just heard all that through someone's bedroom door.) We put it in the freezer because patience does not happen when you're making a peanut butter and jelly roll. 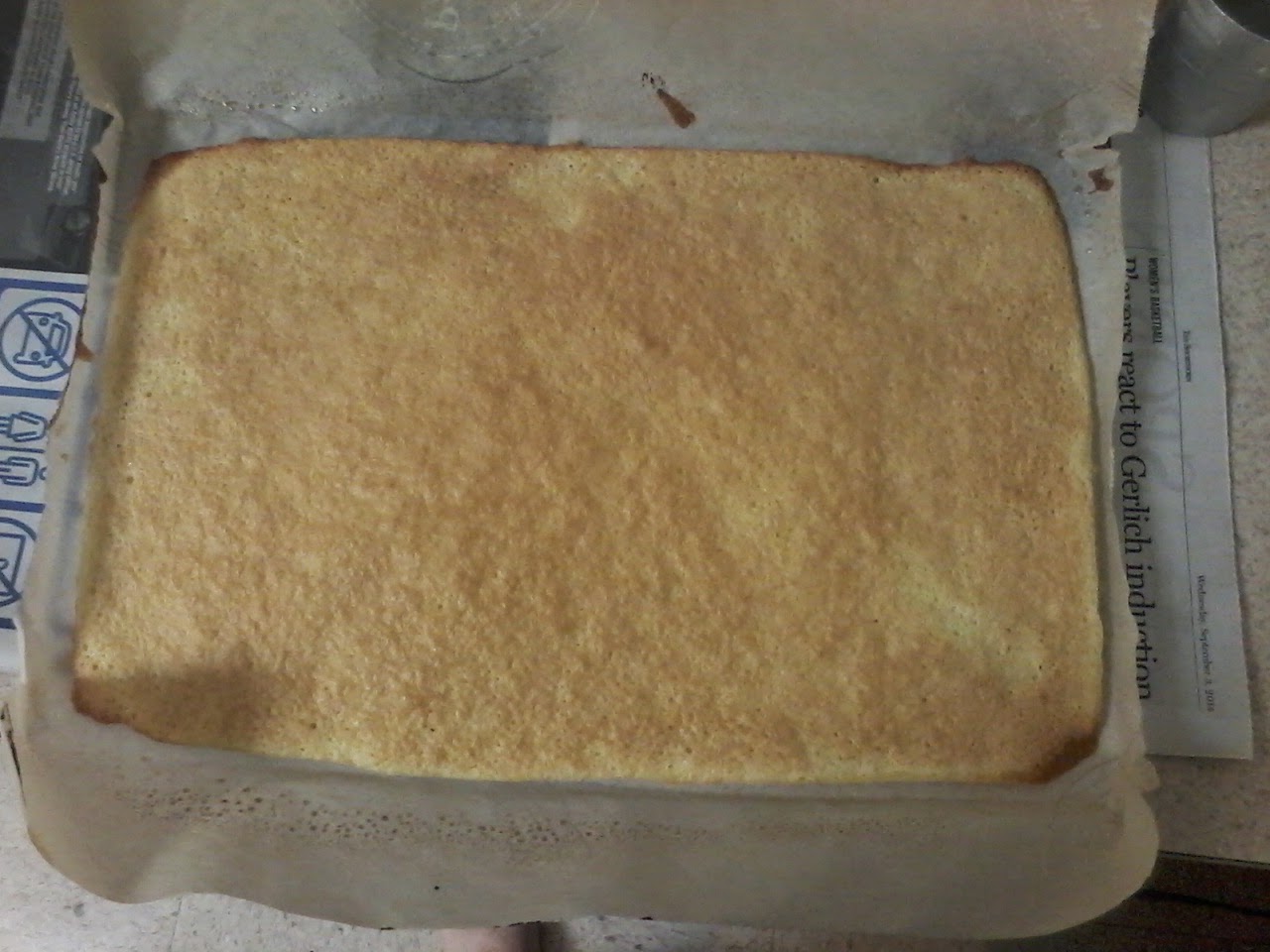 
We put it in the freezer to firm back up really fast, but after 3 minutes we gave in and decided the ends were probably good enough to slice even if the middle was still a little runny. Would you have had the patience if you knew this was waiting for you? 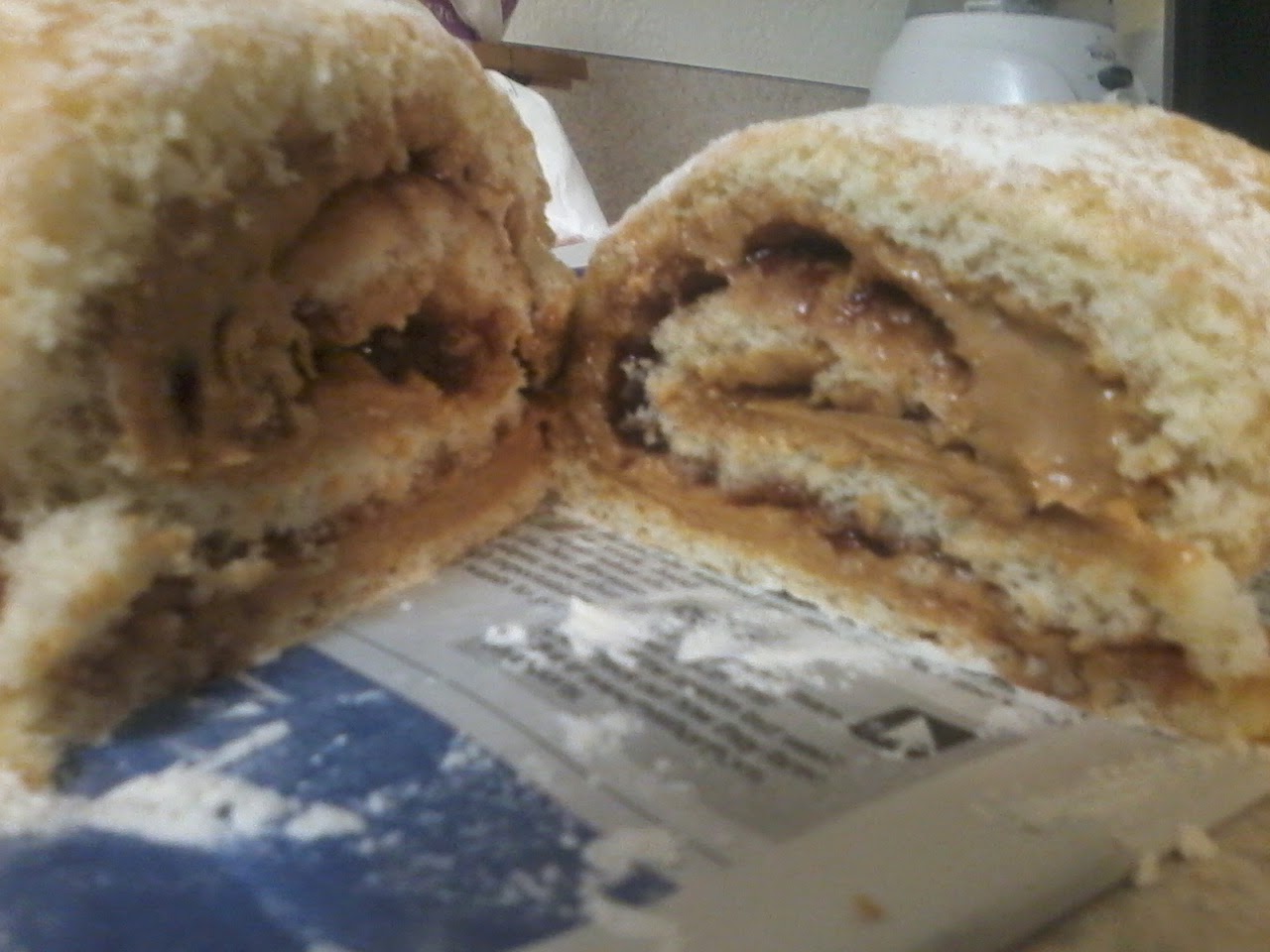 Since it's Marcus' birthday, he got to go first: 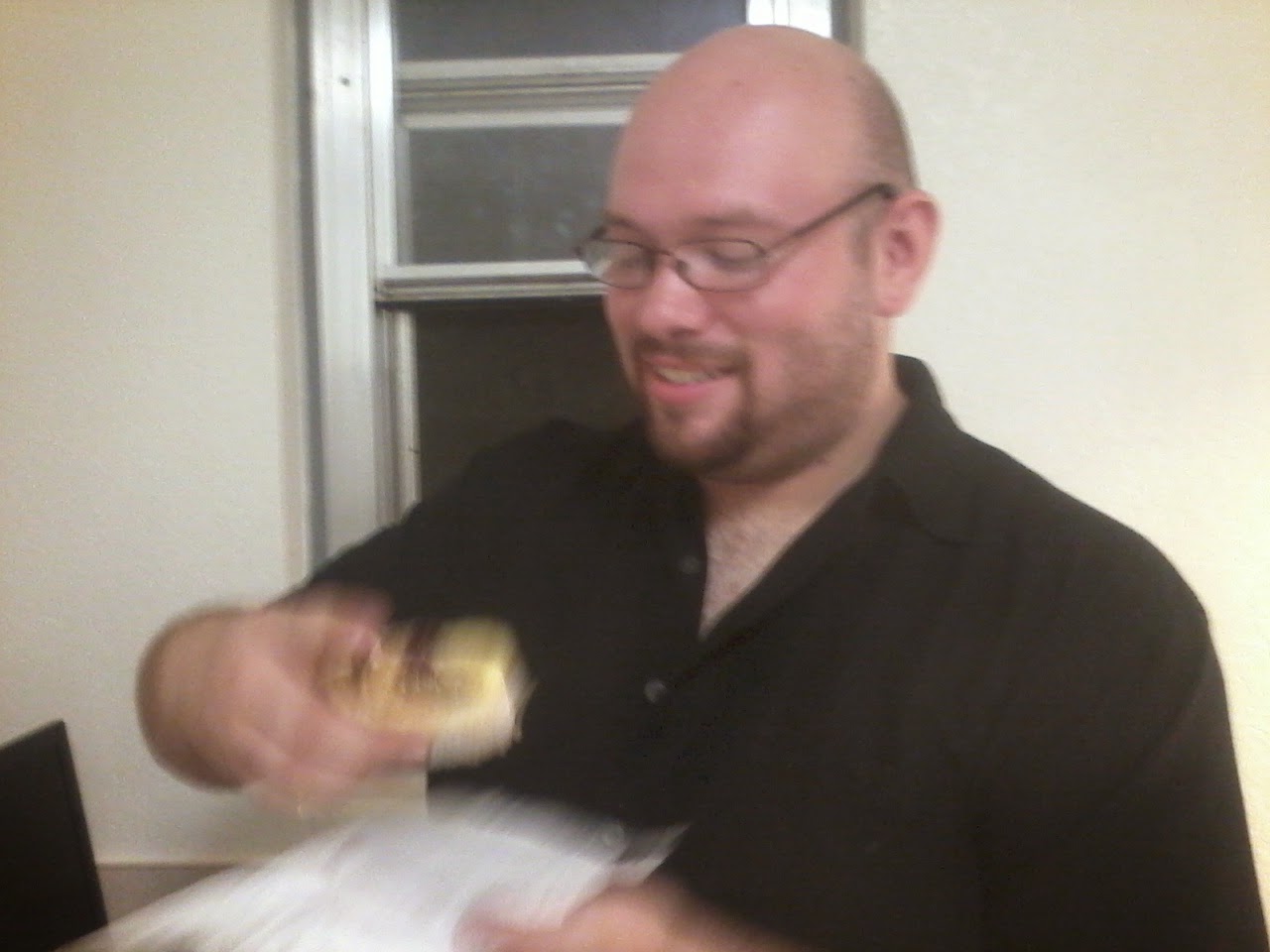 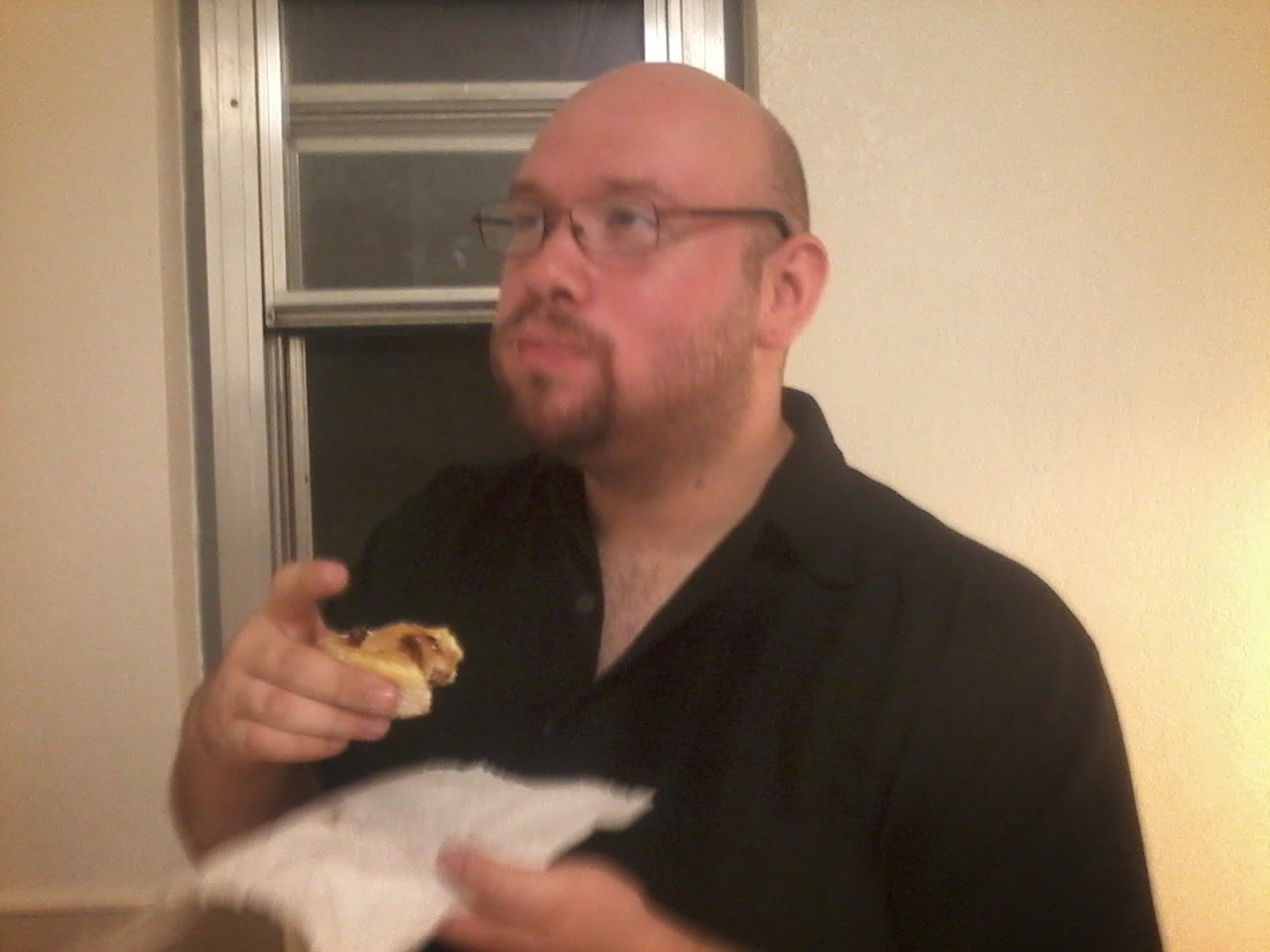 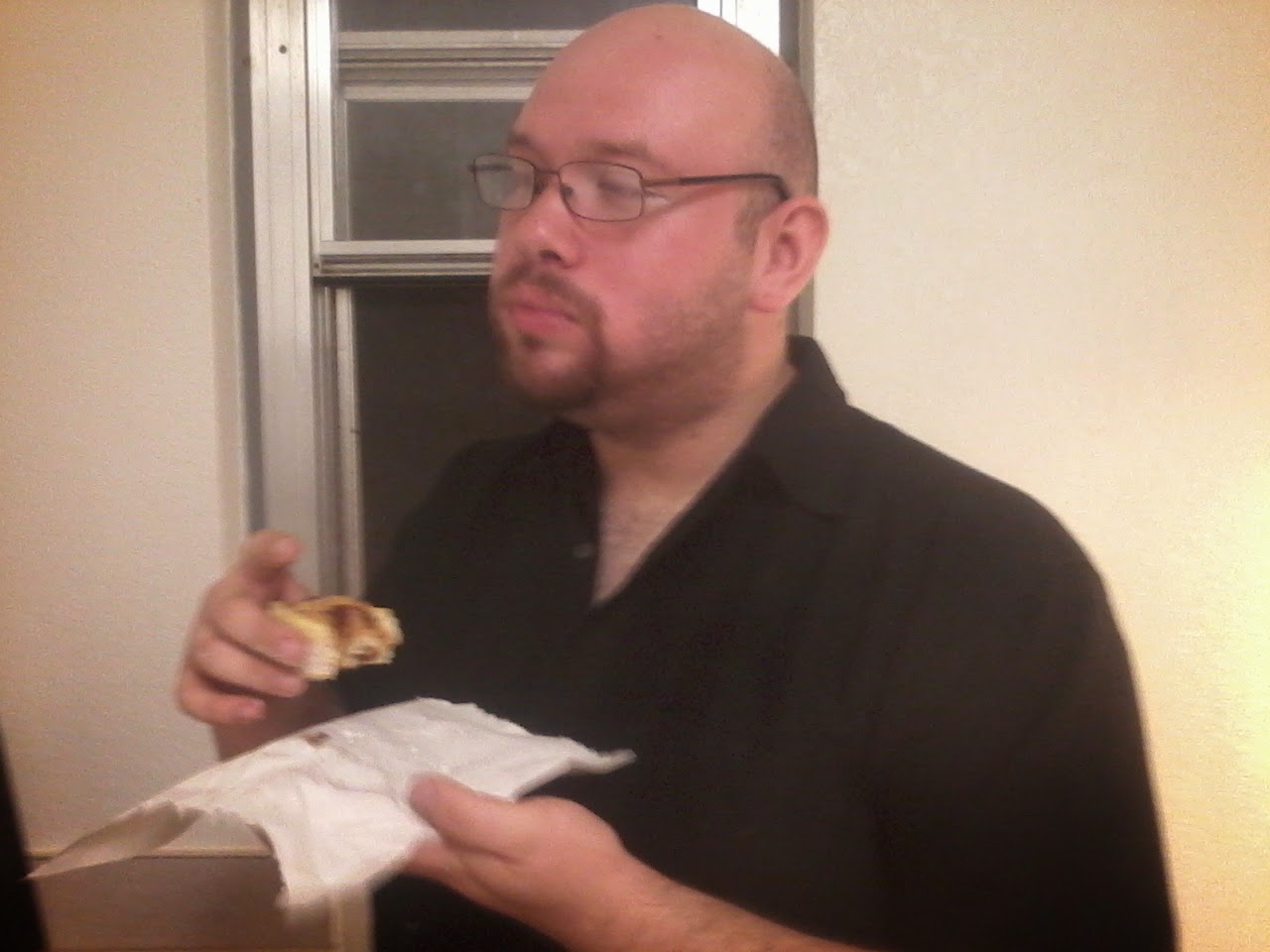 On that tear-choked endorsement, I cut a slice a lot thicker than it should have been. 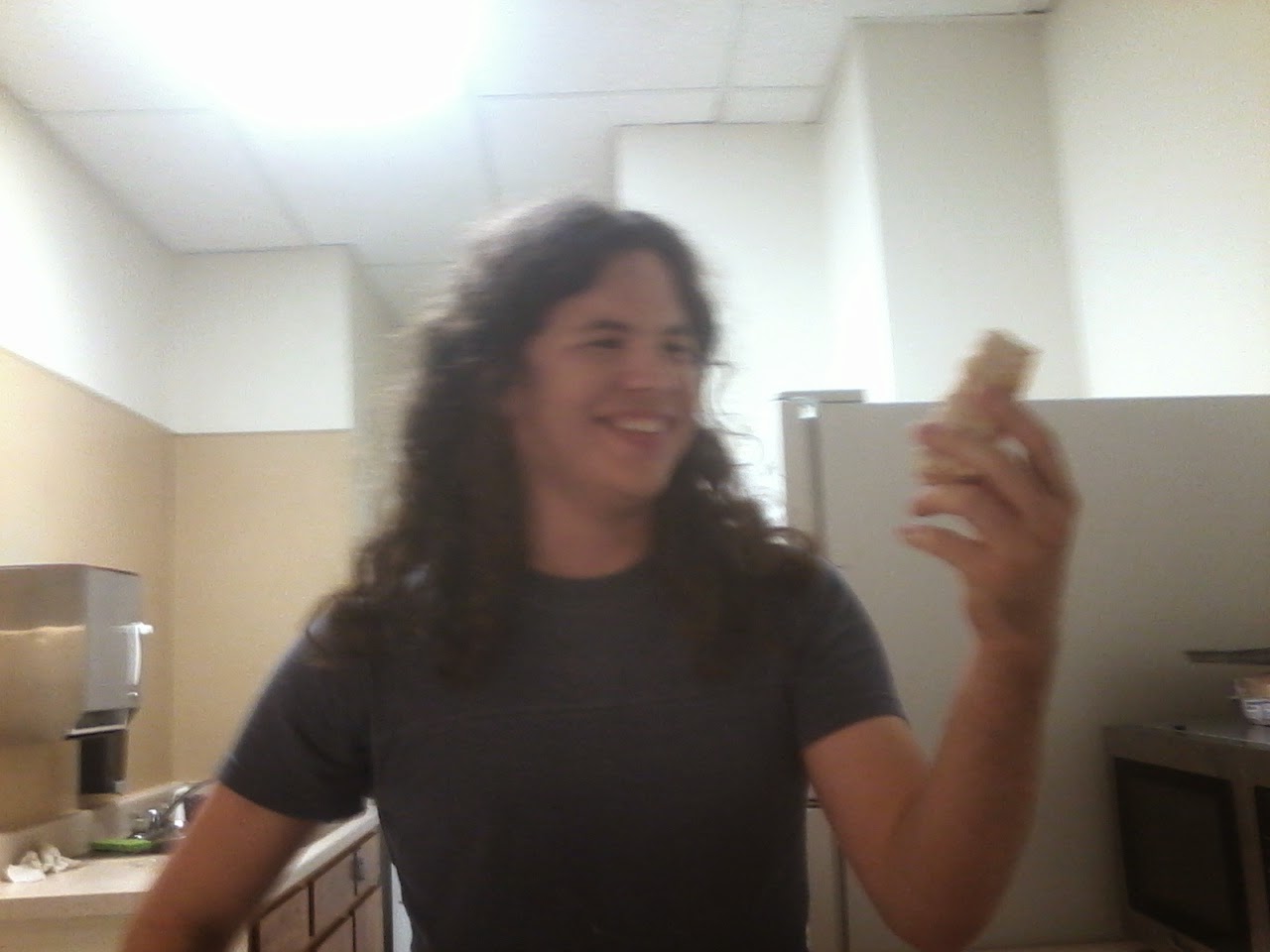 Were I still into titling photographs, this would be The Ecstasy In the Kitchen.
In case you doubt how delicious this was, here's how much was left after 30 minutes:

Since a lot of the reason this was so good was that we used some prickly-pear/raspberry jelly Marcus' sister gave him, we wanted to take a photograph endorsing it in the style of those old kitchen ads where it looks like they put vibrators up those ladies' skirts to really make them smile about a new refrigerator. And so, to conclude, here is Marcus' interpretation of being in a in a photoshoot where they do just that.