Second-Stab Saturday: Orange Pie whether the recipe wants to work or not!

Happy day after Boxing Day! And greetings from my parents' kitchen (which explains why suddenly I have multiple bowls and such)! I must say, the advertising this Christmas seemed a bit less intense. Last year I had so much forced, saccharine Christmas cheer that I had the most depressing music and movies I could find playing on repeat on my computer. It was very cathartic. This year, it seemed like the retail people and the advertisers turned it down a bit. The worst annoyance this year was hearing five renditions of "Jingle Bells" and two people wailing/yodeling their way through "Oh Holy Night" per hour. I easily combatted this by putting on random songs I liked (many of which weren't depressing this year!) while I was cooking.
Having fewer people trying to bust into my nonexistent funds by shouting Christmas cheer into my ears left me able to step back and decide that you know what? It's kind of nice. I gave myself a big present: a successful recipe! 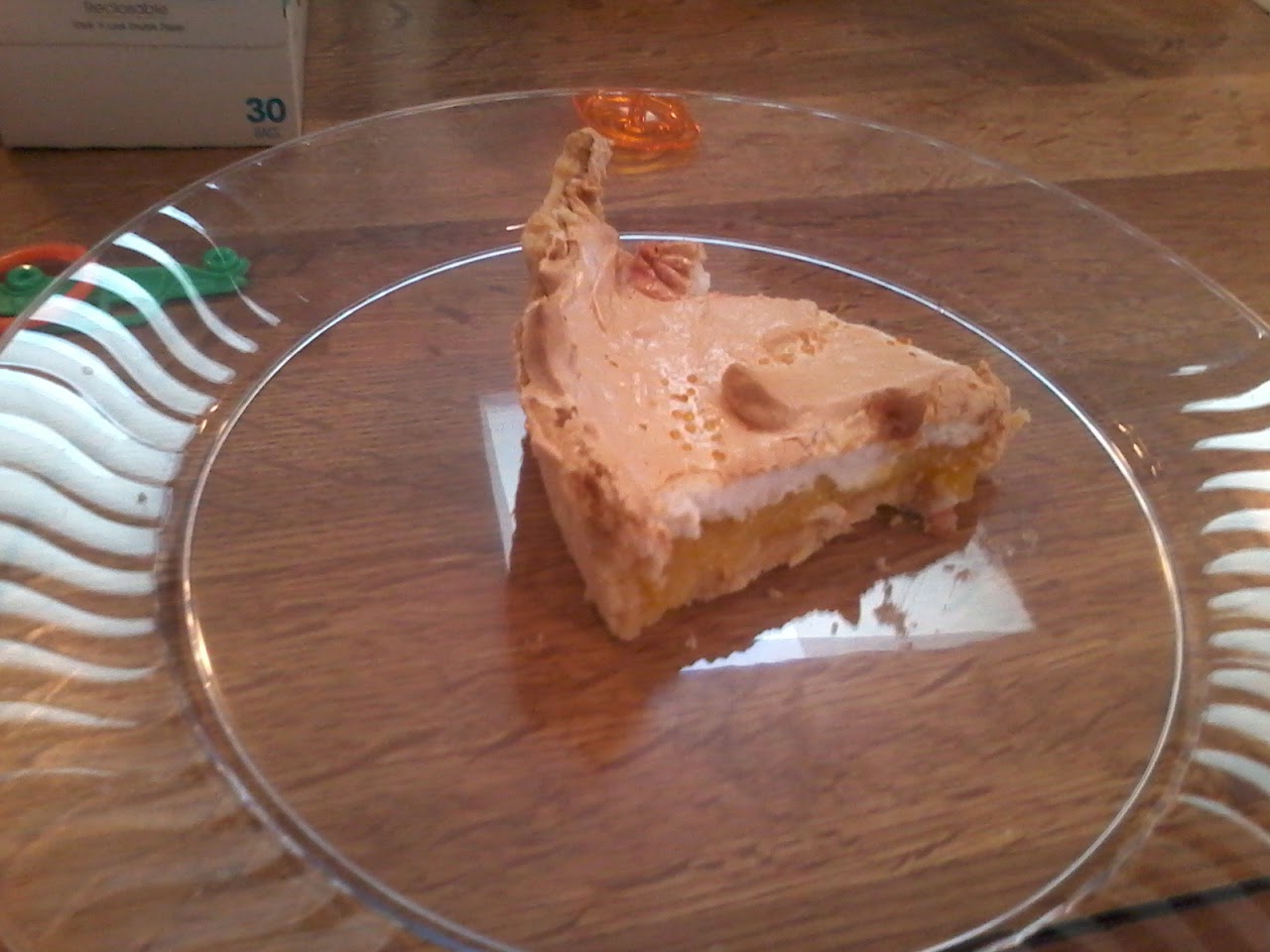 Some of you may remember a recipe for orange pie I made a while ago. A commenter pointed out that I had made a crucial omission to the recipe:

And so, on baking night, once the other things we had agreed to make were done, we stared at the recipe and swore we would succeed. Having watched Delia Smith show us how to do a pie crust, we were off to an auspicious start. Look at this thing! It's beautiful! It's nearly round! It's all in one piece!

Seriously, I was practically dancing around the kitchen. Not only did my pie crust stay in one piece, but it rolled up around my rolling pin!
I've heard legend that you can do this, but I've never ever done it. My pie crusts usually end up like the time I did florentines. Instead of muttering to myself that it tastes better than store-bought ones while patching a bunch of tiny pieces into a pie pan, we had a beautiful single-piece-of-dough pie crust! I wanted to stop baking right there and make everyone on Christmas day behold this pan of pie crust.

The orange pie had failed last time, but we'd left out the cornstarch. Besides, it had tasted good until we boiled the heck out of it hoping for it to get at least a little thicker. Anyway, Mom bought a big bag of oranges which no one was eating, so I didn't feel at all bad juicing three of them for this (I picked out the ones that were starting to get a little spotty). They were so juicy I had to empty out the reamer midway through squeezing each orange half. 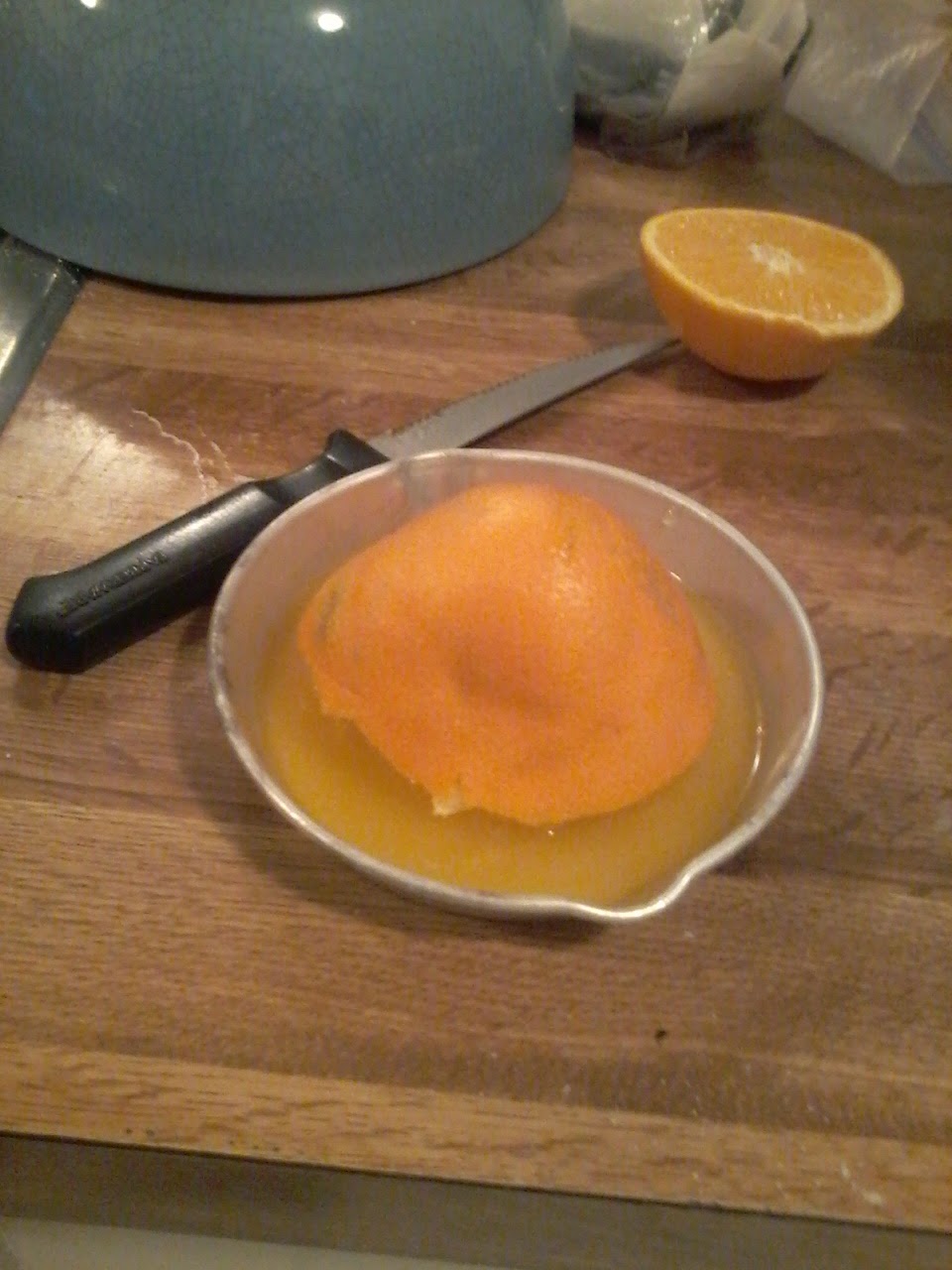 We got a lot of juice out of these 3 oranges. I had to get out one of the larger bowls.

One of the nicer things about being at home is I don't have to carry everything downstairs that I'll be using while cooking. This came in really handy when I needed a tiny bowl to crack each egg white into (in case of yolk breakage, you only lose the one instead of losing all of them if you crack them all into the big bowl),  a bigger bowl to hold the other egg whites, a third to hold the egg yolks, and a fourth for the business of creaming the butter and sugar.

And so, we mixed up the filling, carefully including everything written in the recipe. The cornstarch amount seemed seriously low, especially after cross-checking with some lemon meringue pie recipes. So I upped it from one teaspoon to three tablespoons. 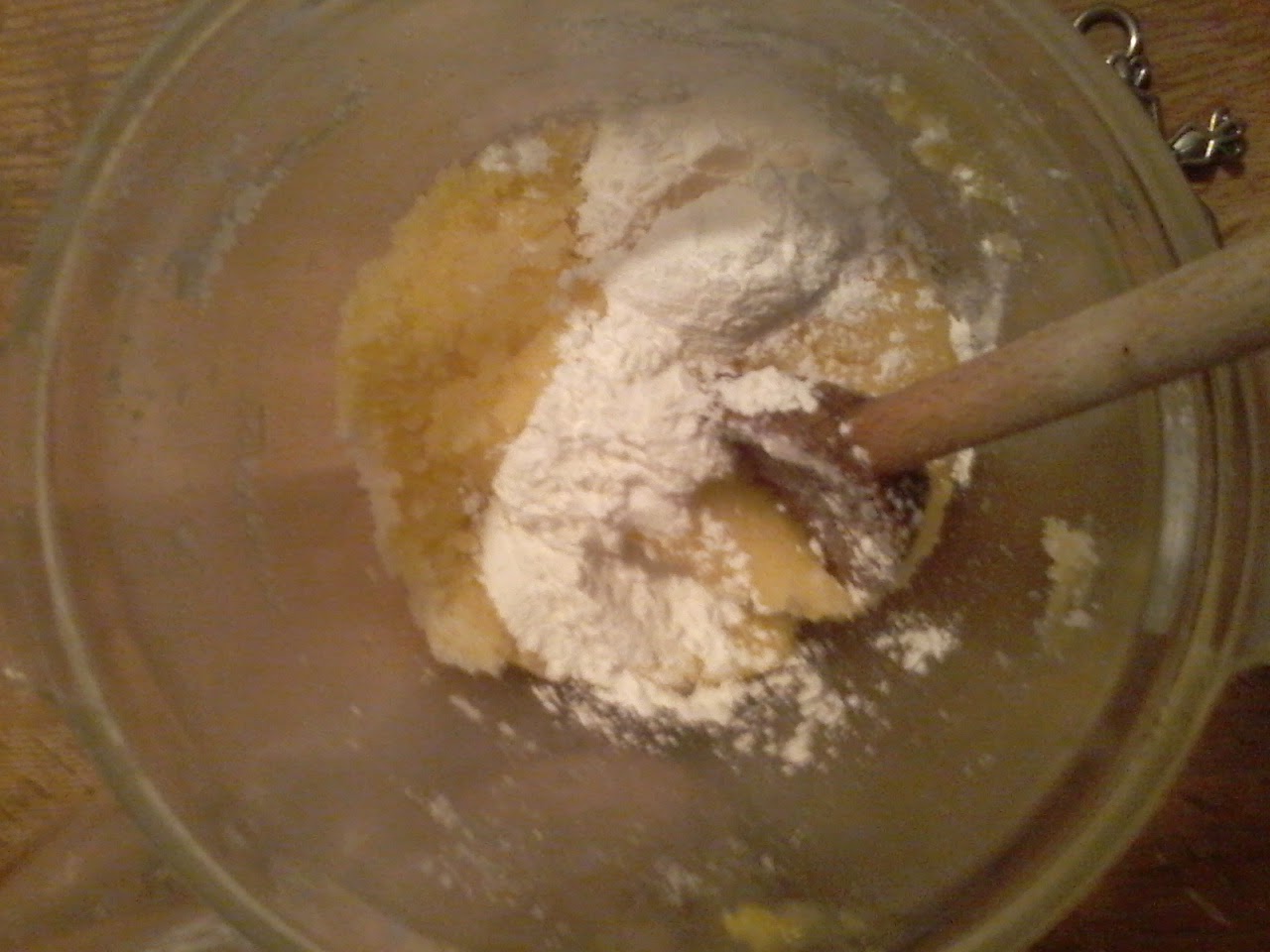 However, we lack a double boiler. Fortunately, for some reason my mother has a whole cabinet of mixing bowls. I don't know how many I had out from the various Christmas things I had going, yet there were still more to choose from to make up for the double boiler deficiency.

Since we had a lot of pulp in the orange juice and I didn't feel like straining it out, it looked like we were attempting an omelet. 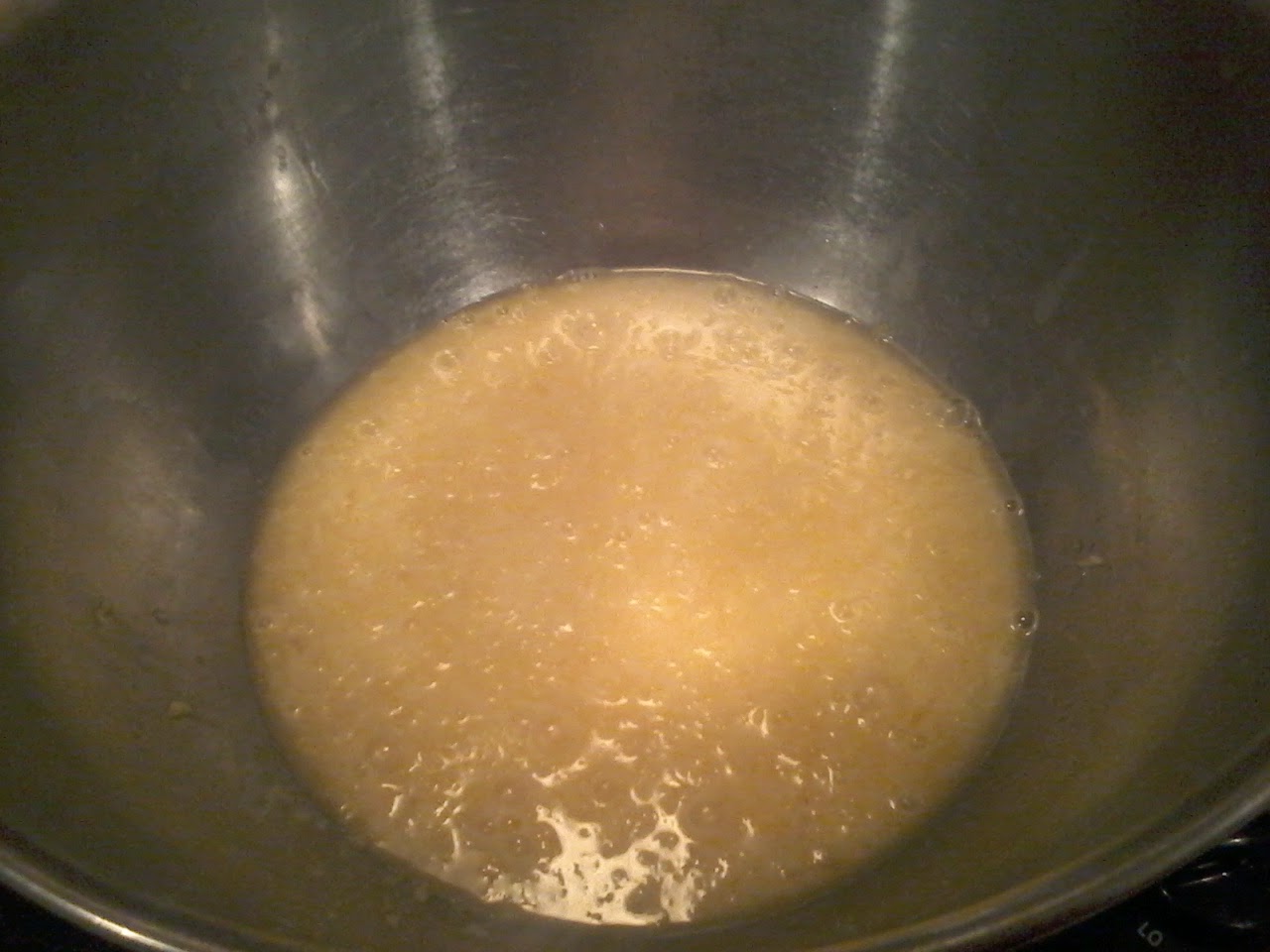 It wasn't the double boiler, as I'd just made a pecan pie in it which was in the oven as I stared possible failure in its orange-flavored face. Was it leaving out the egg whites? No, I've done lemon pies that similarly put the yolks in the filling and the whites in the meringue, and they worked. Was it the one tablespoon of butter? Had I under-cornstarched the whole thing despite putting in nine times the written amount?
Since the last one was the only thing I could correct, I spooned out some filling, put it in a shallow bowl to cool, and stirred in a lot more cornstarch once it wouldn't get heat-fused into lumps. I'd thought I'd stir the slurry back into the rest and end up with a thickened pie.

And so, after another fifteen minutes' cooking (bringing us to a total of somewhere over forty) brought no real change, we took the bowl off the pot of water and put it directly on the burner. After it had boiled for a minute or so, we had.... 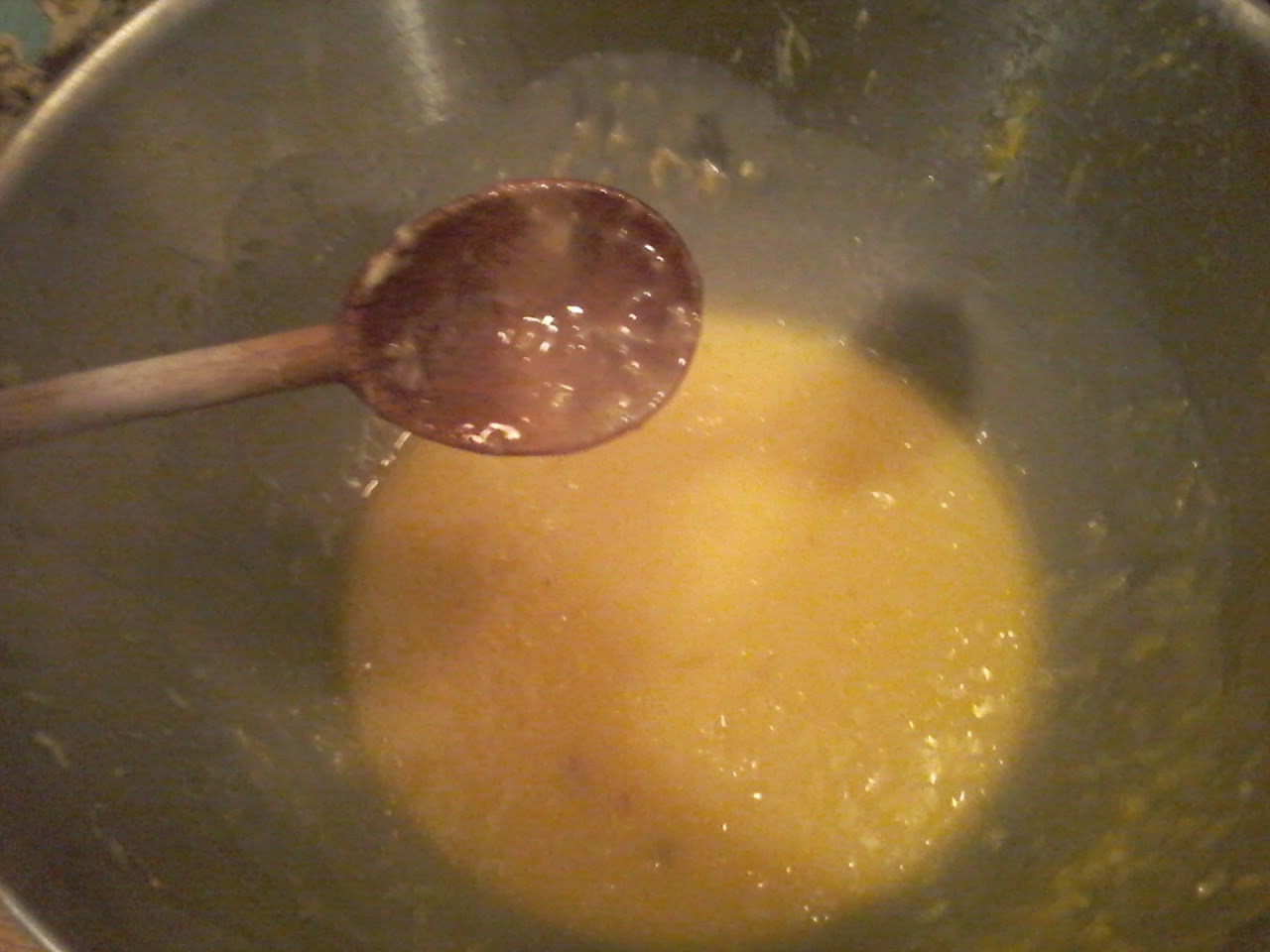 Well, that's a little better.... I guess......... Ah hell. This ain't gonna work and it tastes overcooked like the last time. I took it off the stove and frantically tore apart the cabinets hoping to find some gelatin or something else to force this damn thing set. There was nothing! That's it, this is going in the disposal!
We were muttering angrily about this, pacing angrily up and down the kitchen as Mom's Christmas clock announced it was now 3AM by chirping out "Angels We Have Heard on High." We wanted this thing to work, and it hadn't! We speculatively eyed the ignored, overflowing basket of oranges, then we put on some ranchera music because shit in this kitchen was about to get real.

Borrowing from the pecan pie recipe we had just succeeded with this very evening, we used flour instead of cornstarch. Also, being fed up with superfluous steps in recipes that kept not working, we didn't bother creaming in any butter. We just dropped in and figured it would all melt together anyway.
Our latest attempt had more promise. While in the double boiler, it clearly was thickening, but it was taking its sweet time doing so. We transferred it to the small frying pan sitting empty from earlier and within seconds, we had this!

The pie was a bit thin in the pan, but I was too happy at this actually (so far) succeeding finally to care. 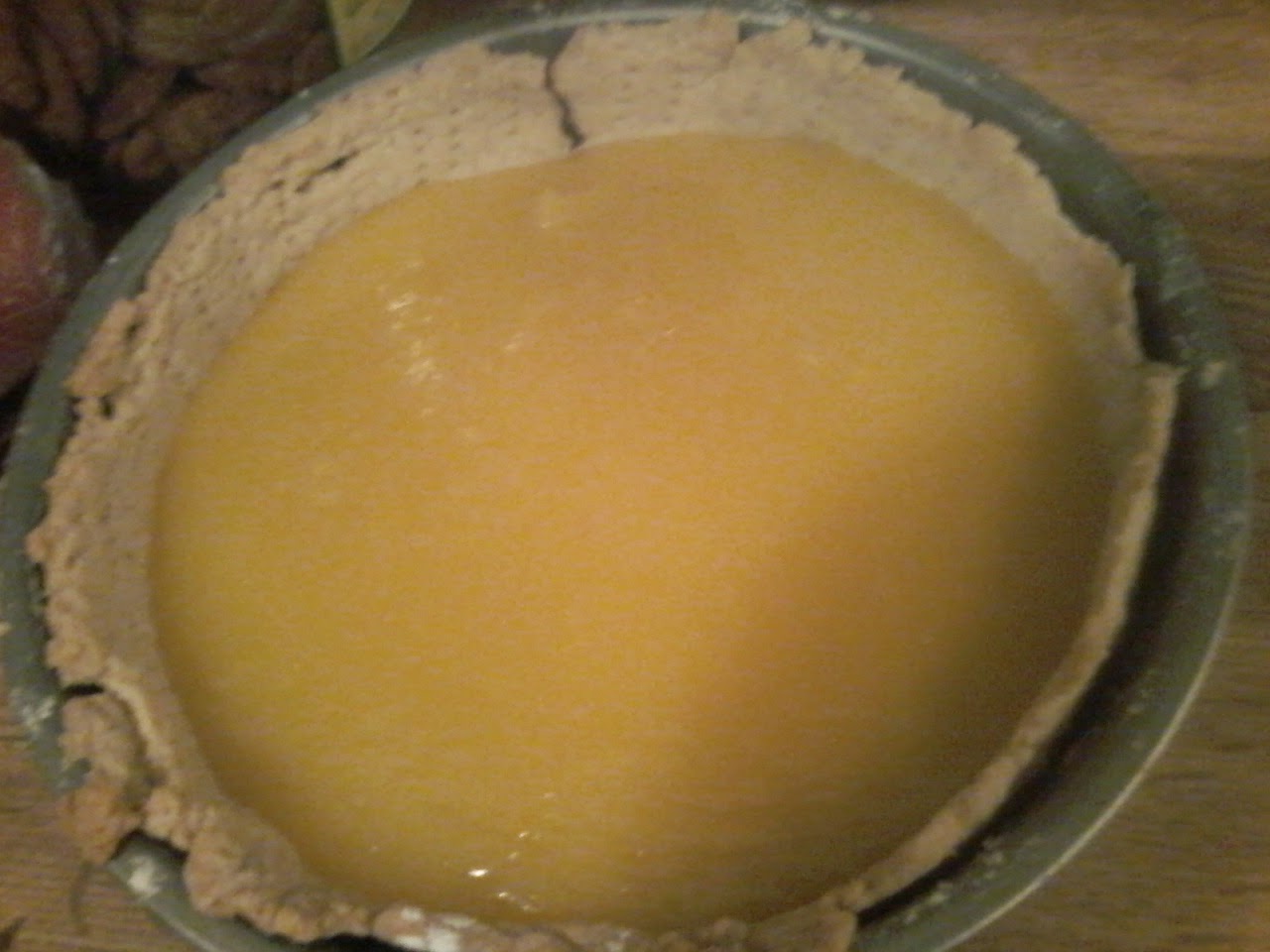 Being not a little leery of this pie's history of failing us, we put it in the oven to further set. Then we noticed how firm what was still in the frying pan had gotten once the pan cooled and decided this was unnecessary. 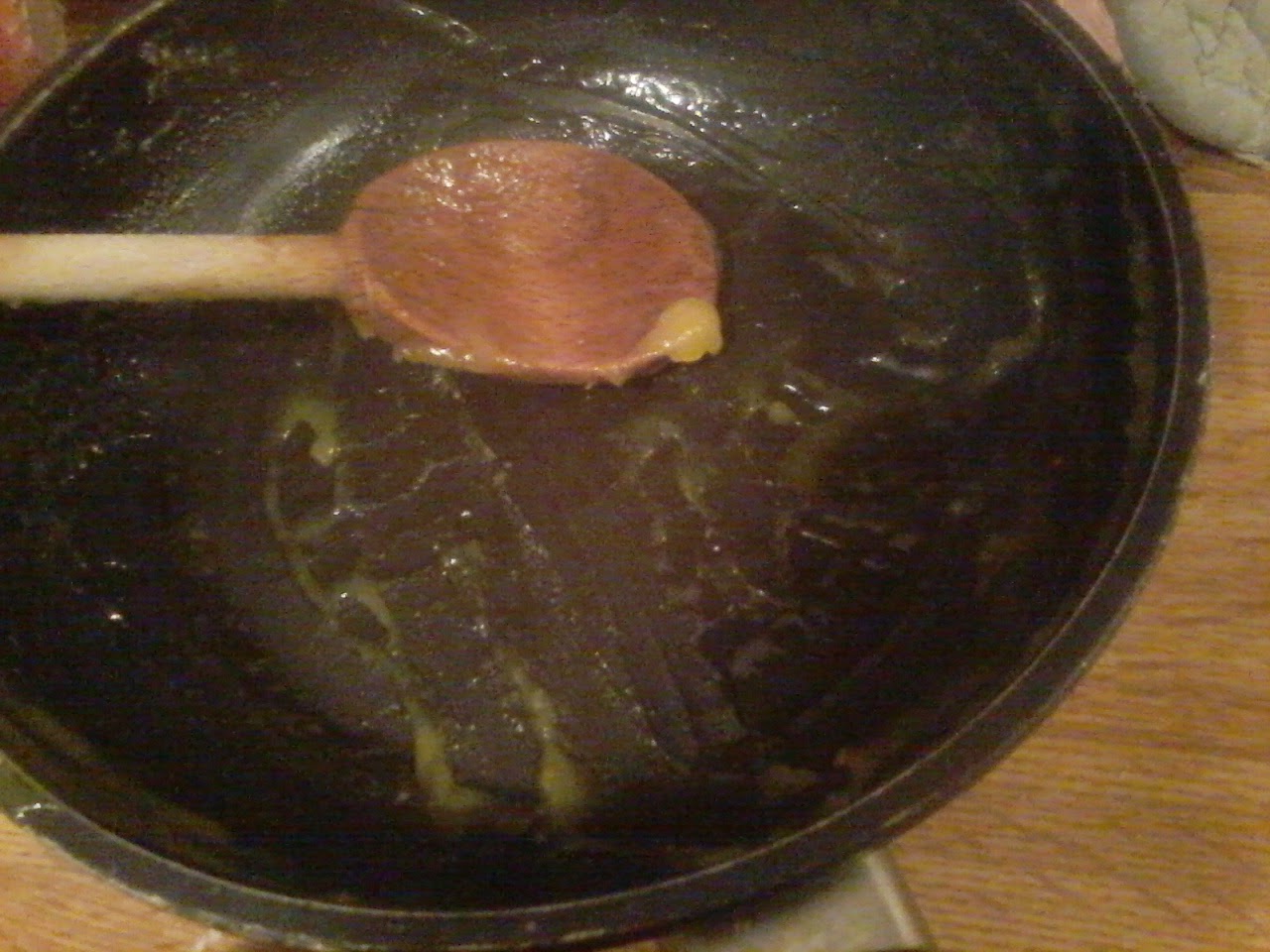 The main part of the pie was ready to go (and very tasty). We now got to take out our frustration at spending over an hour on this on some unsuspecting egg whites! 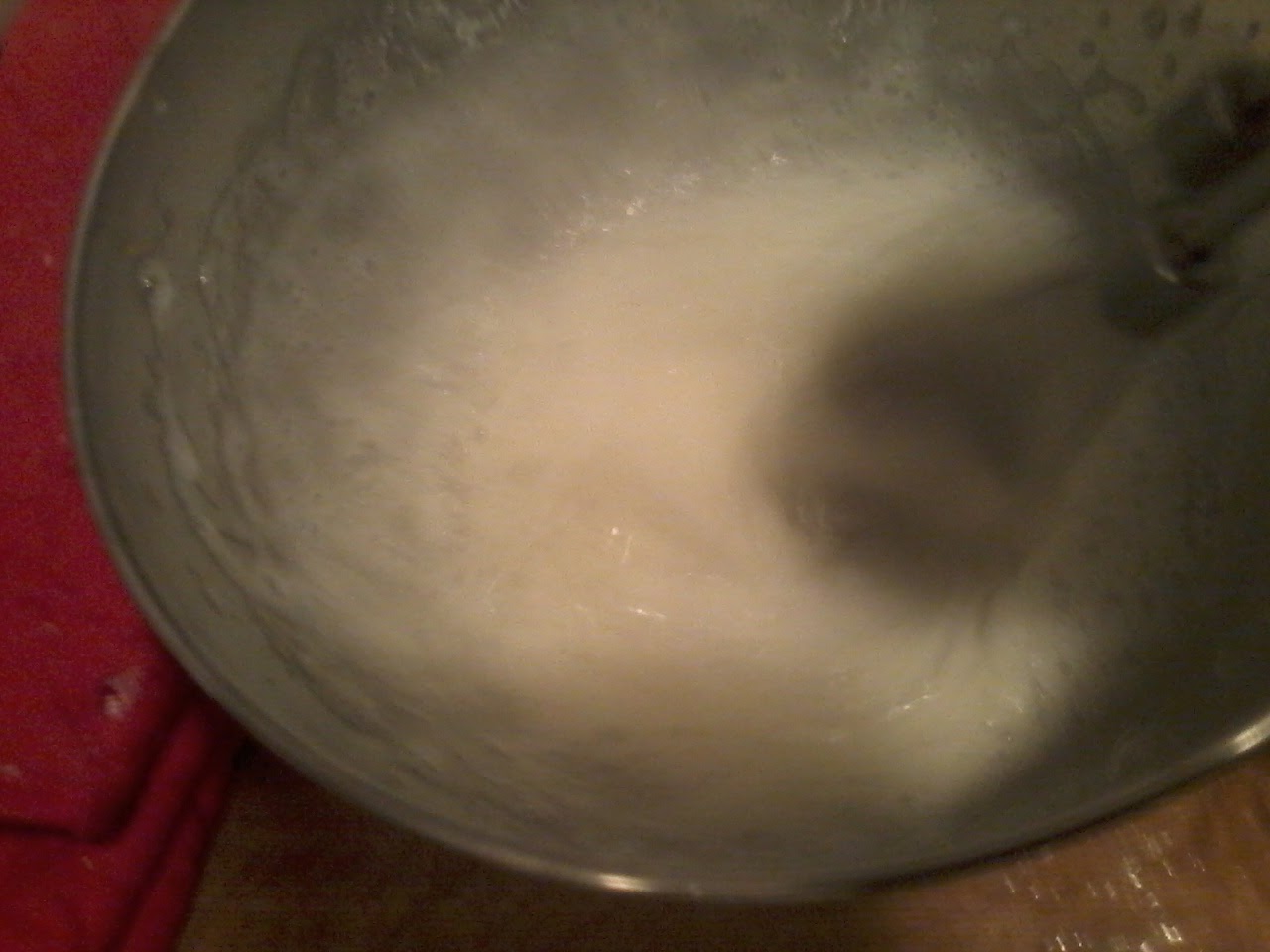 At this point, we reached for the sugar and realized we'd run through the sugar. I'd have started swearing, but no one wants to wake up the house in the first hours of Christmas Eve with cussing. I furiously tore through the cabinets hoping for a forgotten sugar sack, and the best I came up with was powdered sugar. It would have to do. 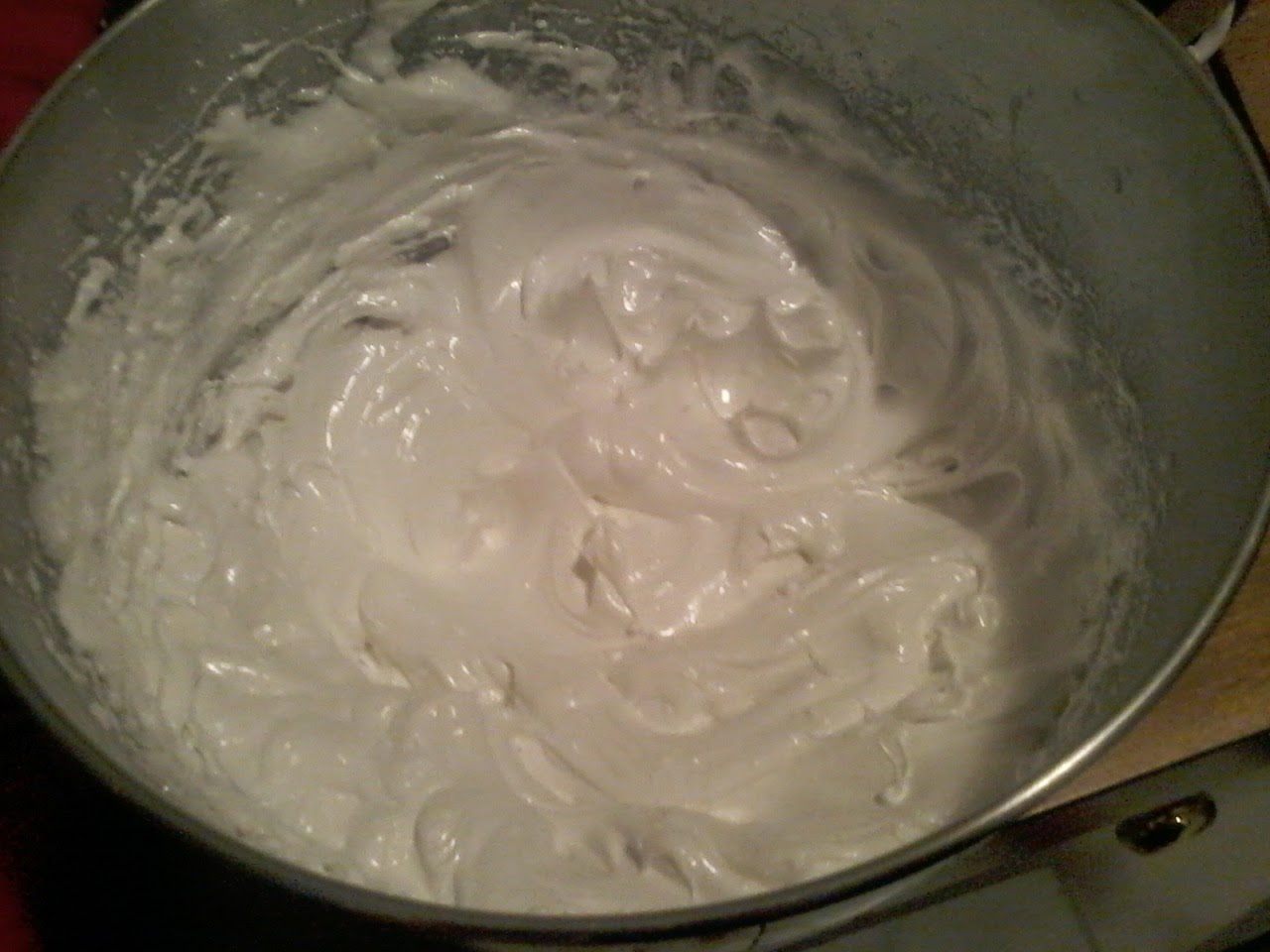 The meringue mixed up in about a fifth the time it would have taken with granulated sugar, but it had an unnerving cornstarch taste. Curse you cornstarch! Why do you keep trying to ruin my pie!
Anyway, there wasn't much meringue.
We gamely spread it across top of the pie. An attempt to pull up peaks just made it look sad, so we let it look like icing and shoved it in the oven. 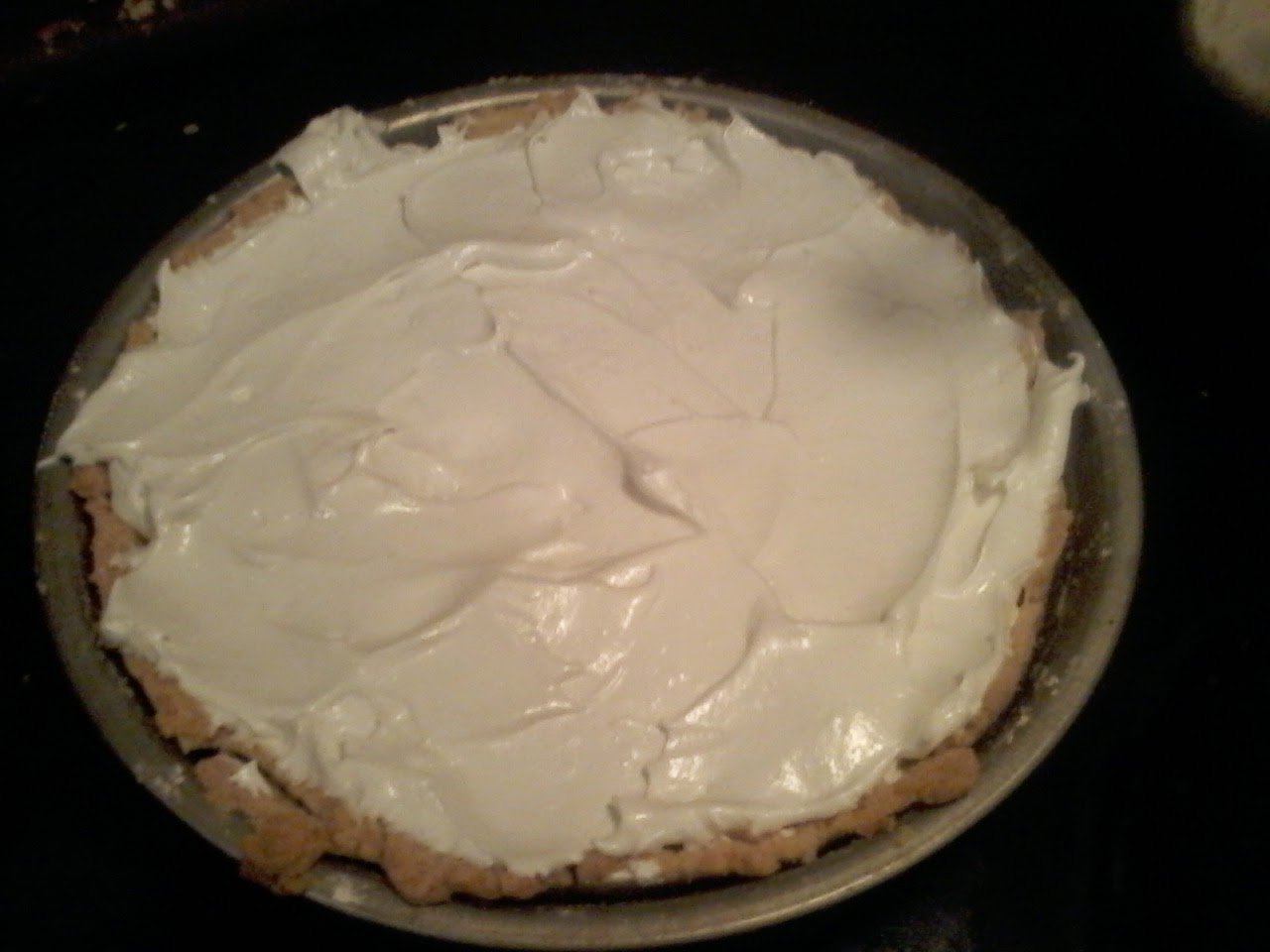 It got promisingly puffy in the oven (keep in mind how much of the pan is empty crust since filling's so shallow), and I thought it might actually end up like a proper meringue. 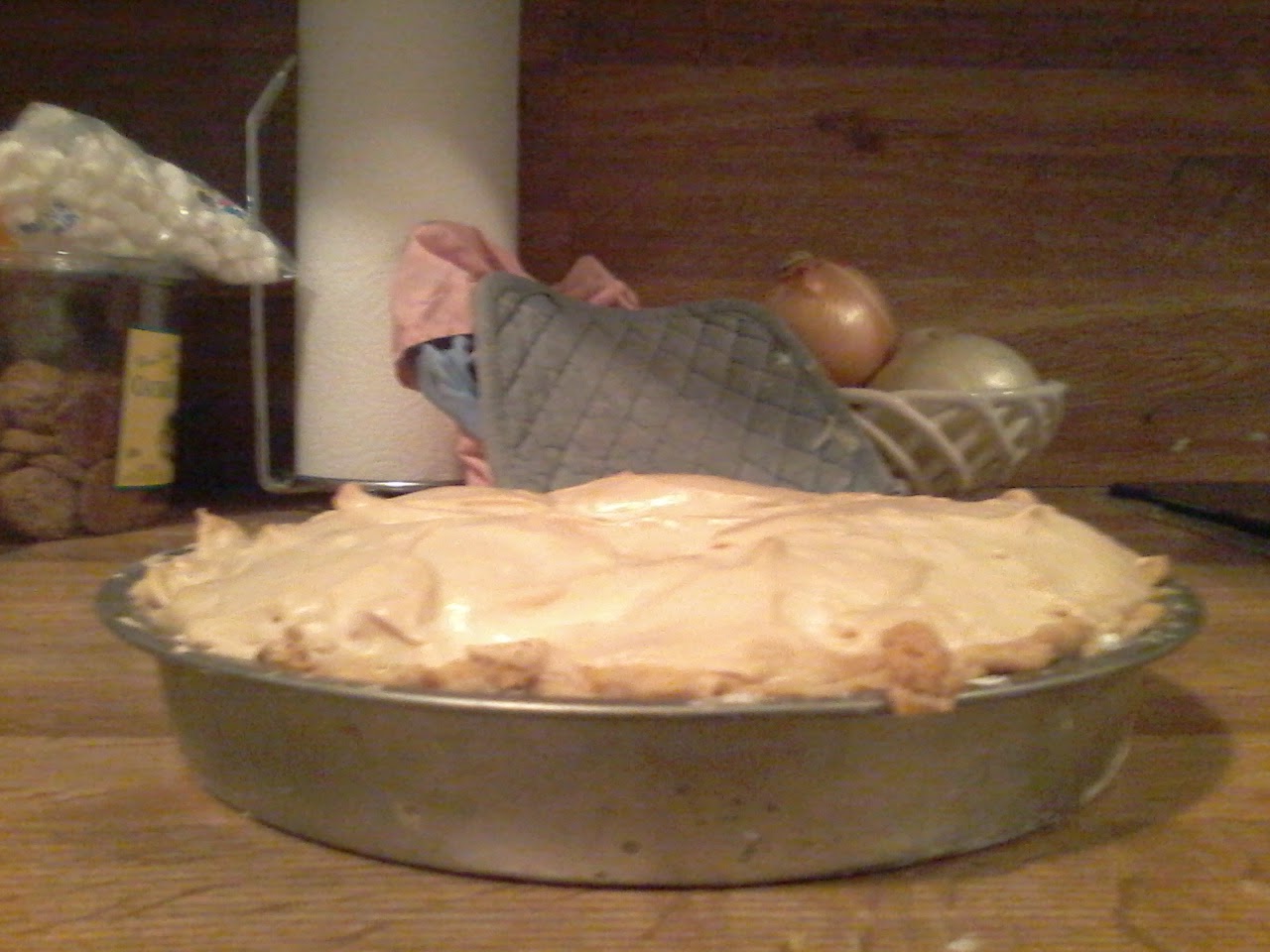 However, it returned to its original size when it cooled and sweated out little beads. What the heck are these? Every meringue I leave out for a day or so does this. 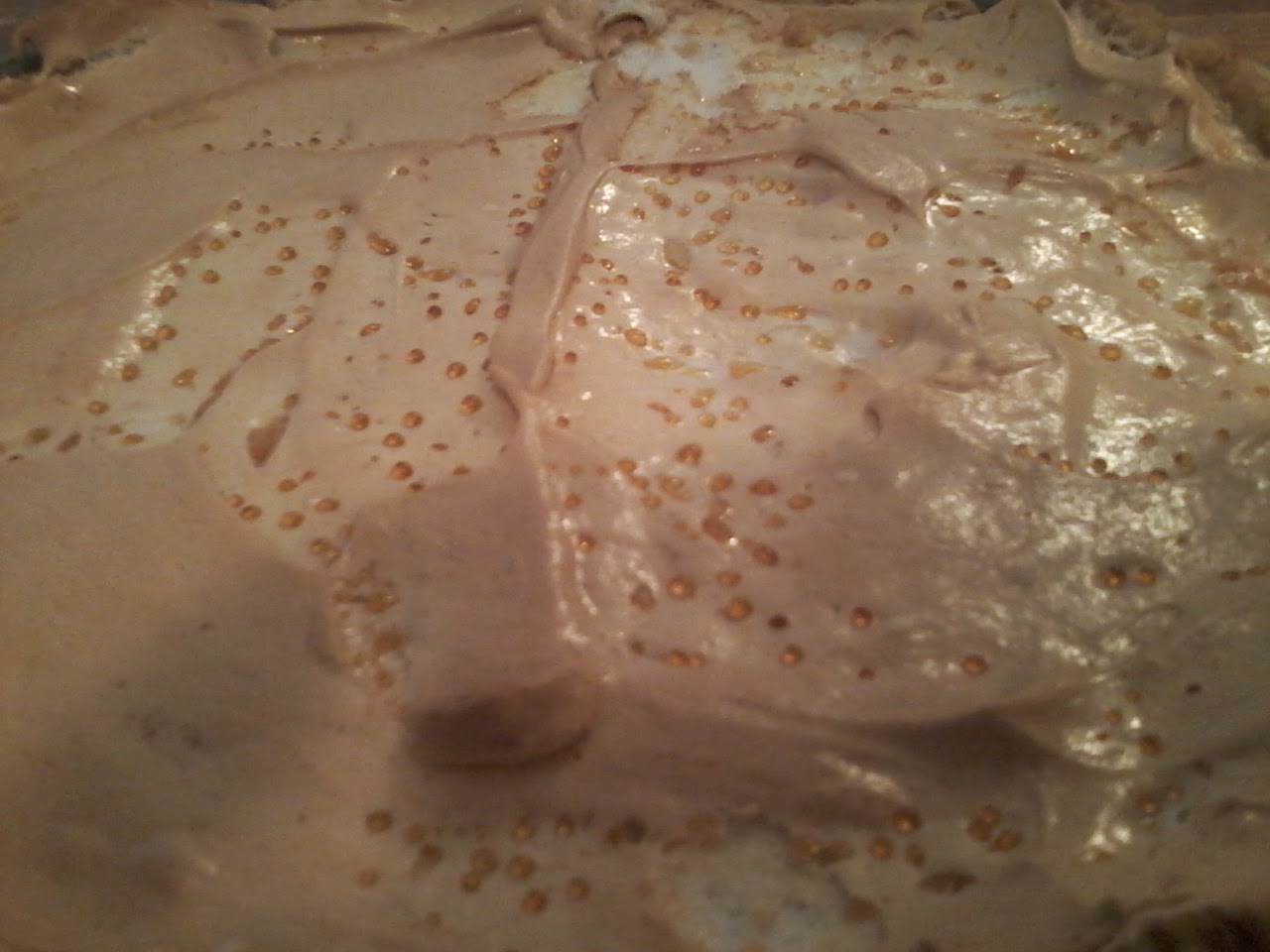 At any rate, the cornstarch taste went away in baking, and the meringue tasted just fine. And so, Christmas came. Here are everyone's reactions:

"Where'd you find a recipe for an orange pie?"

I had no idea an orange pie would be so mystifying. It seemed so straightforward. However, once people tried this surprisingly surprising pie, everyone liked it. The meringue was actually better for being so thin- it was a nice fluffy topping rather than this massive mound of foam. This is a really good pie, and I recommend it most enthusiastically now that the recipe actually works.
Posted by S. S. at 12:05 AM