Holy crap, I now have to remember write 2015 when dating papers! Well, while others are making new year's resolutions to better themselves, we at A Book of Cookrye are evaluating 2014 and considering how we might better ourselves. We finally made a resolution for the first time in many years, and proclaimed it to our friends to further motivate ourselves.

We've currently been not-so-gradually demolishing the leftover Christmas sweets, which brings us to today's recipe! Since we've already busted our diet good and hard, why not have something we really like? Therefore, spuds, garlic, and cheese!

We at A Book of Cookrye, when ignoring our usual attempts to eat healthy, often layer potatoes and lots of cheese just like we do macaroni (try this, it's delicious- even better when you leave the skins on which saves time anyway), but we weren't in the mood for melted cheesiness.
Besides, there's a sack of fingerling potatoes sitting out uneaten. 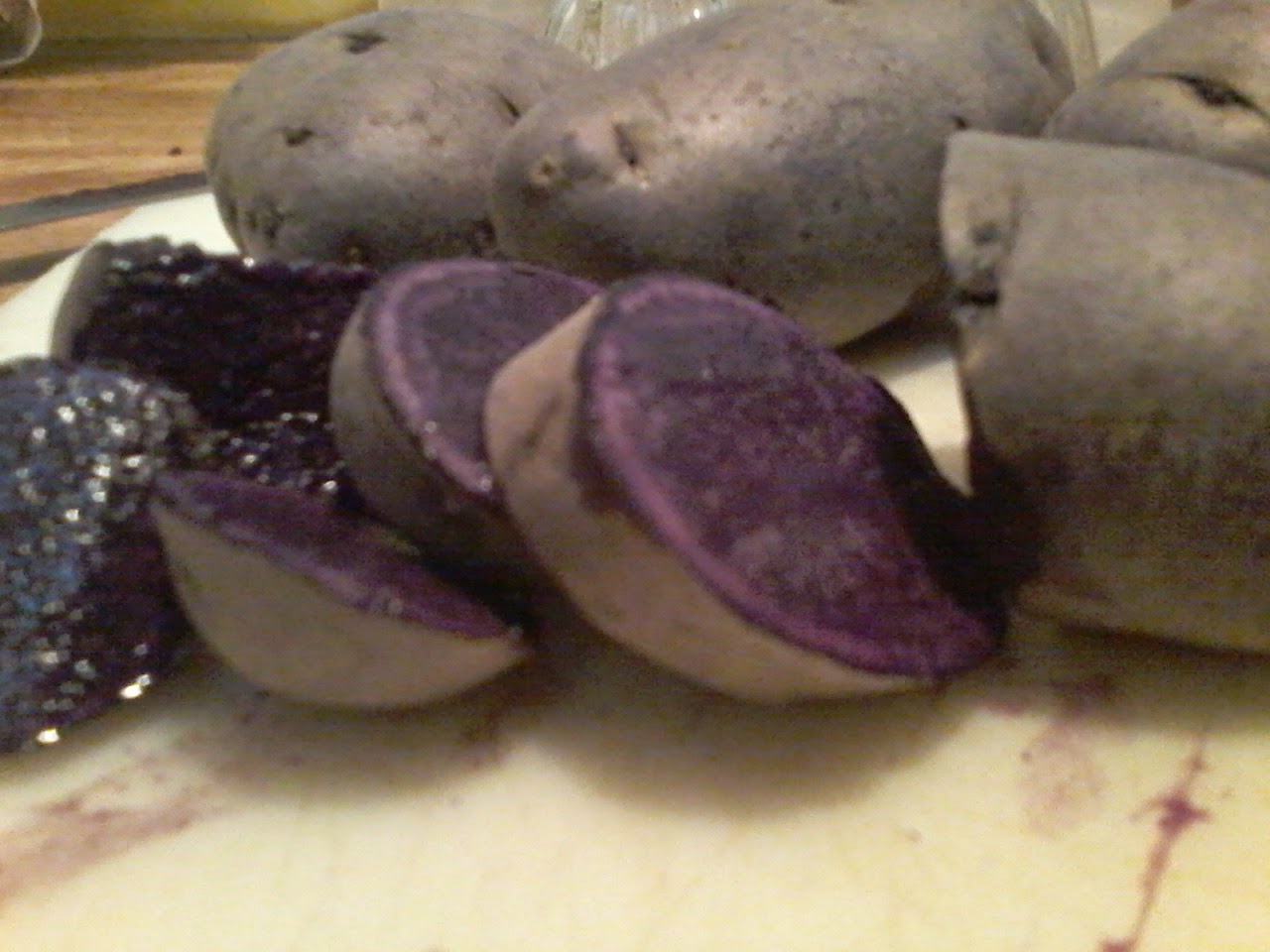 What can we say but that blue and purple potatoes are awesome. We once served them mashed to people who refused to believe we'd gotten over our childhood love of food coloring in everything. Besides, they make today's dish of cheesy spuds look more interesting.
If you're wondering why this is a quickie despite spending such a long time cooking, behold the ingredients:

As previously mentioned, we did not care for lots of melted cheese today (although it's delicious, we just weren't feeling it today). We just scattered Parmesan on it so it would turn into crunchy cheese bits. However, we then remembered one of the few food things we brought home with us (it is rare we take food home with us, usually we take it when we leave).

And so, not wanting to get out and subsequently wash a bowl, we discovered you could just shuffle the potato slices around on the cutting board and the garlic would mix in.

The skillet is a small one I got as a Christmas present for my parents (I'd like to think it sort of makes up for all the cast iron I've reseasoned in their house). I thought it was cute, and a nice, easy-to-pack size for camping which they like to do. While I swore at the age of sixteen that I would never be more than 5 minutes' walk from a hot shower, I see no problem in indulging those who think otherwise.
When not using it over a campfire where it is small enough to put other things around it on the grilling rack (see how thoughtful I sometimes am?), it's about the right size for one person to put their one-person-sized supper in. Other things I've made in it include my "Whatever, I don't have a date anyway" sauerkraut-cheese-garlic-potato bake. It wards off disease.

And besides, purple potatoes! It's even fun to say. Try it.

We had some Parmesan flakes, so I used those instead of shredded. Theoretically it would result in bigger cheese crunchies.

Tada! I hope you like what you're looking at; it took an entire 10 minutes to put together.

But after that almost nonexistent prep time comes an inordinately long baking time since it's potatoes. On the bright side, you never have to check on it or do anything to it once it's in the oven. Heck, I decided this was as good a time as any to get an oil change. It takes a long time to overcook potatoes to the point where it's bad. Mostly they just get browner and crispier.

And behold all of the dishes one has to wash once this gets baking: 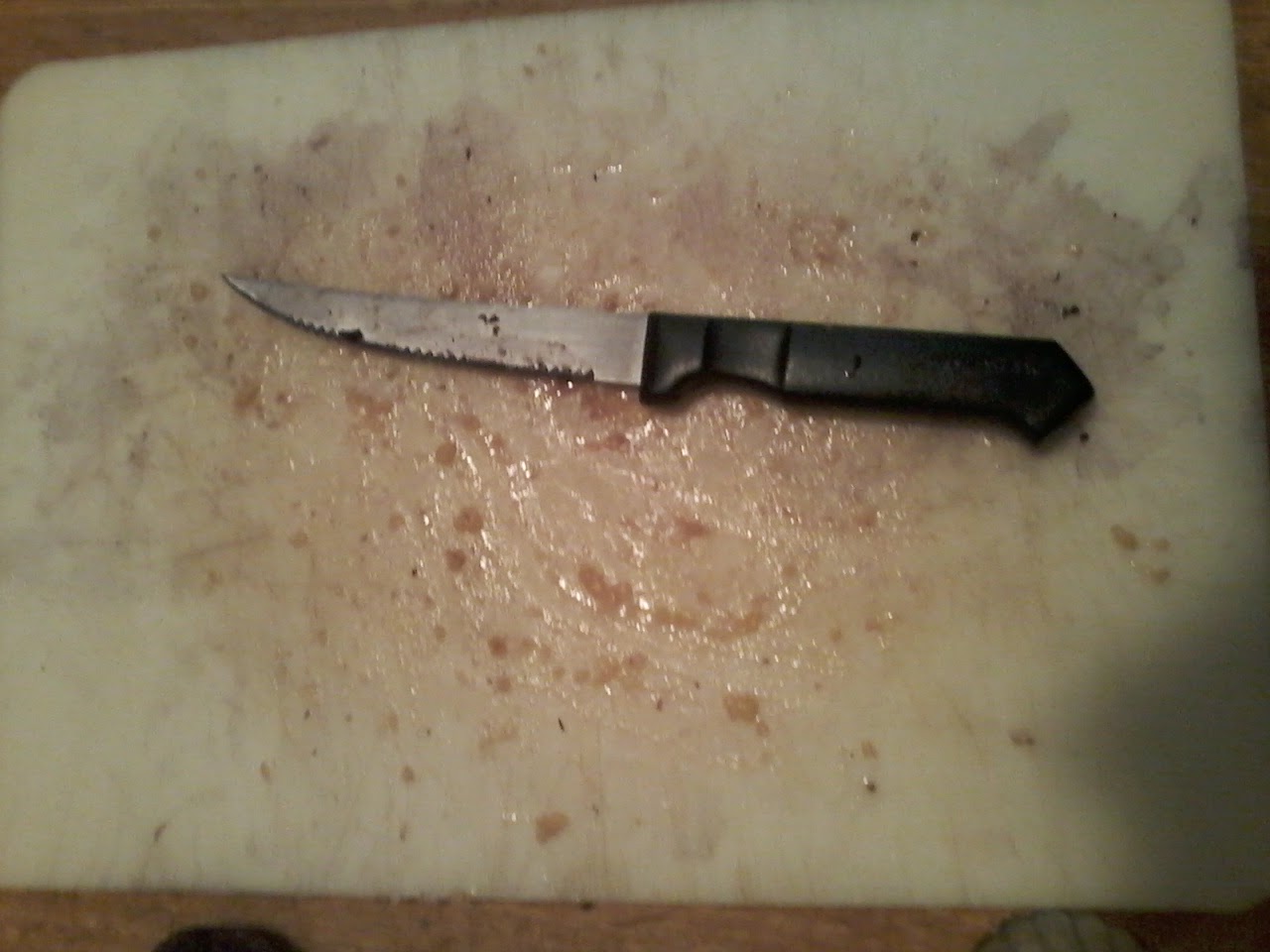 And so, we at A Book of Cookrye heartily endorse cheesy potatoes. You can layer them with gobs of Cheddar or smatters of Parmesan. You can put in paprika, salt, pepper, or put in something weird. It's hard to mess up a pan of these, and they leave one very sated.
Posted by S. S. at 12:40 AM