We at A Book of Cookrye are now facing the consequences of Christmas. We suffer not from the shameless face-stuffing on Christmas Day, but from the weeks of delicious, delicious leftovers. Anyway, we're going to attempt to reverse what we did to ourselves and--- oh, who am I kidding. Every time I think of sticking to a diet I get existential depression at the thought of a long life without cake.
However, this slice of vintage diet recipes seemed really tasty in its own strange way. Besides, this is the recipe with the shortest instructions I think I'll ever put up.

I do want to credit my parents, who upon my leaving home at the end of break said I could help myself to whatever foodstuffs I wanted. Short of "I deposited it in the bank today" or "the package should be there in a day or so," is there anything more gratitude-inducing to one's ears than "help yourself to the food"? At any rate, that is where everything in today's recipe aside from the parsley comes from.
Speaking of, I've never eaten parsley before ever. It's always been the thing on the side of the plate that everyone knows you're not suppose to eat lest you expose yourself as uncultured and severely déclassé. Upon biting off a leaf, it's surprisingly pungent and seems to do as much good for one's breath as mint. The next time someone tells you not to eat the parsley sprig on a plate, especially after the garlicky spaghetti with extra garlic, ignore them. You may be a philistine, but unlike the highly high-minded naysayers, you're more likely to snog someone later. 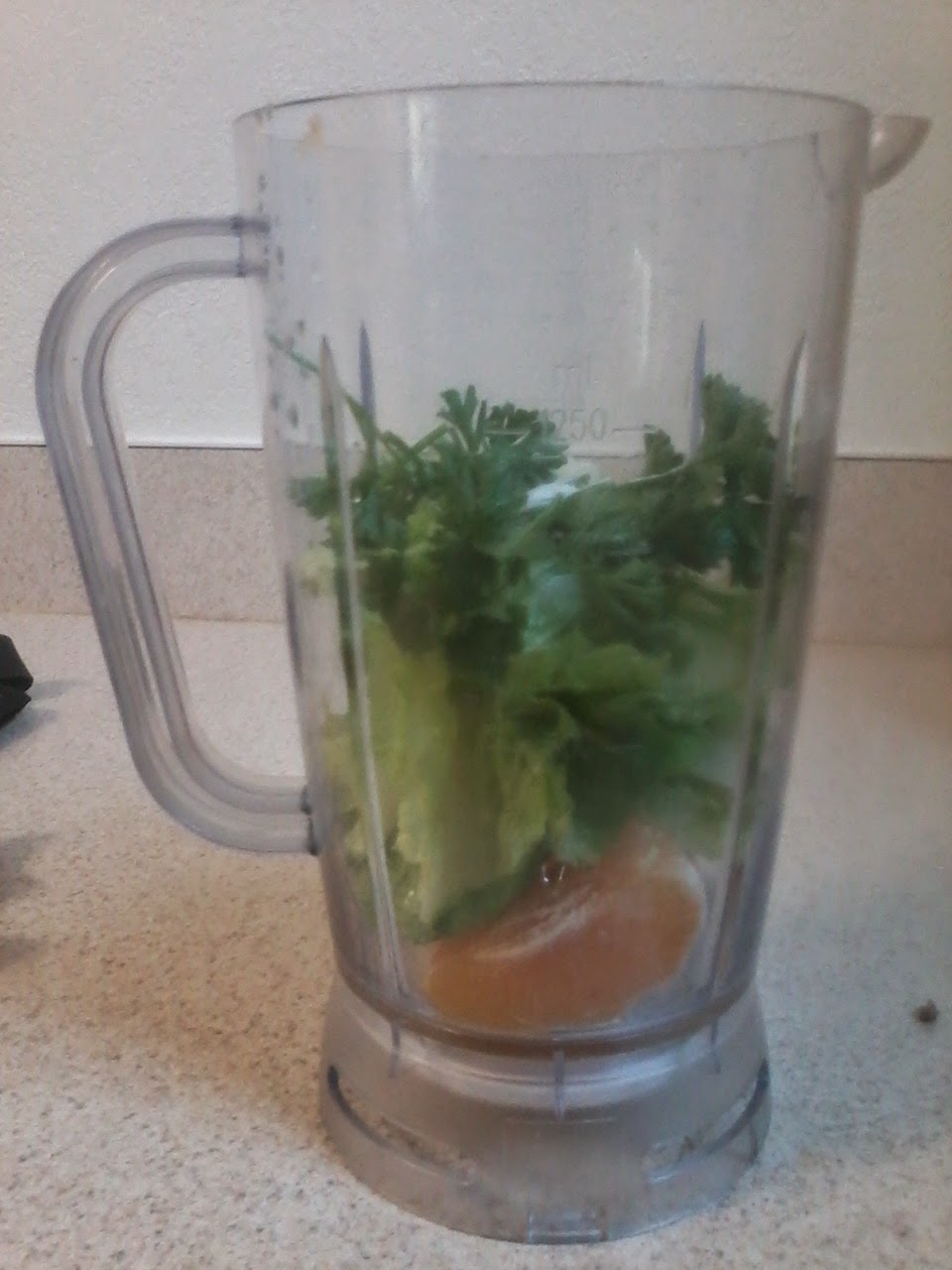 This seems to be the makings of a perfectly good salad. Therefore, like anyone dizzy from dieting, we're going to put our salad in the blender someone left in the kitchen and drink it. I've often wondered what the appeal of putting salads in a blender might be. A lot of people I know do it and call it "juicing." The best answer I've come up with is it disguises when your vegetables are wilted and sad yet not expired enough to throw them out. I myself saved the inner leaves that hadn't gone droopy for salads and used the ones that were kinda brown at the edges for this.
I can see how it'd be convenient to have your salad in a glass which you can have on the go. However, any time-saving anything hinges on being able to leave your dishes later. Communal kitchens being what they are, I do not have the luxury of saying I'd wash up later tonight as I ran out the door. At any rate, this was too thick to blend without stopping every five or six seconds to stir it. It likely would work better in a food processor, but we are restricted to what appliances have been abandoned in the kitchen. 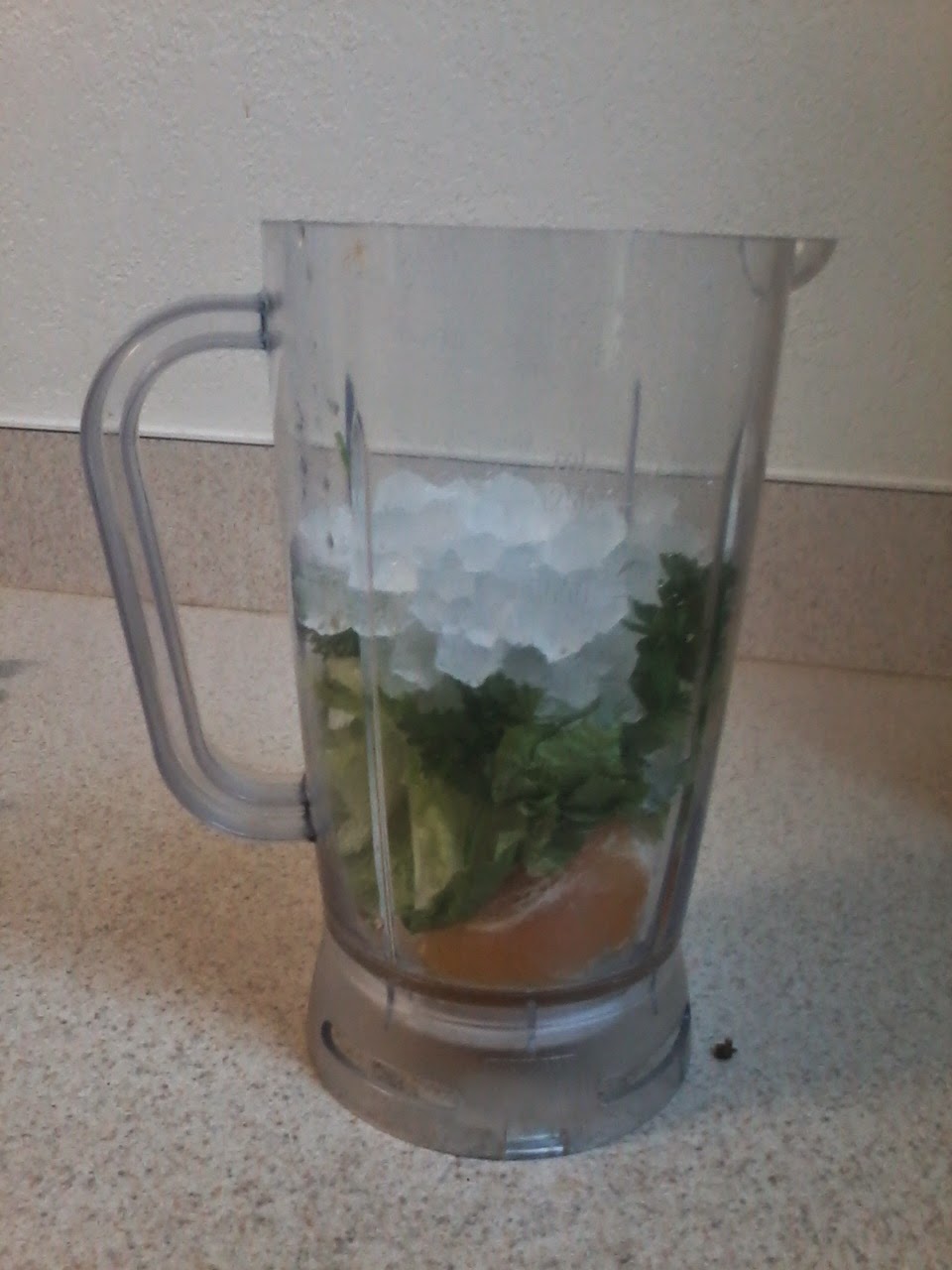 Slight aside: now that I think about it, I have no idea why the dorm is provided an ice machine. A lot of us are grateful, but I don't know of any other school that puts one in each dorm, for free.


Honestly, the Far-Out Green Smoothie wasn't just mildly tolerable, it was really good. I'd deliberately make it again. The parsley definitely added a slight pungency that made it a lot better. Since fresh parsley is surprisingly cheap, it's totally worth adding.
However, in full disclosure, the original recipe says it's supposed to be 2 servings. But let's be realistic here- that essentially means making a meal of two lettuce leaves and half an orange. I think the recipe writers thought the same. Given that this would become a sad runny mess if you try to save the other serving for later, if you were really only supposed to have one serving at a time they would have listed the ingredients at half quantity.
Posted by S. S. at 3:02 AM