Cheesy Flaky Biscuits of Deliciousness!: or, We accidentally made our own puff paste

Easter has come upon us here at A Book of Cookrye! Because, unlike most years, there wasn't a gathering of most of our extended family, we didn't take over the kitchen and make three pies, two cakes, and a smattering of other recipes we've wanted to try. We made just one pie. However, we accidentally made crust for two of them. Once we got the pie in the oven, we thought about what to do with the big lump of flour and butter that remained. 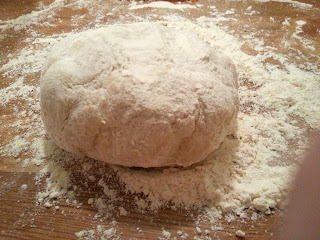 We used to use shortening for pie crusts, but after making one with butter and hoping for the best, we found it seems to work so fricken much better. Everyone's always said shortening works better than anything else, but we've never been able to just lay pie crust on the pan in a single, tear-free piece when we used it. Shortening-made pie crusts always broke and crumbled. 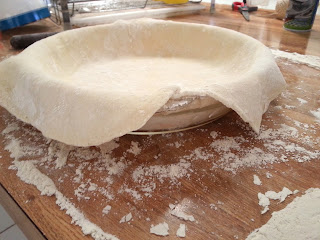 Seriously, look at that. It stretched when we needed it too, held decorative crimping (which we're admittedly terrible at since we've never had this happen before), and in general was, finally, after years of patch-job pies, as good as if not better than purchased pie crust. We wondered what to do with the extra we had from doubling the pie crust recipe by accident. And so, we made these!

For the record, after trying multiple pie crust recipes, we hit on this in the random old cookbook we got as a present and it's worked better than anything else:

We interpret shortening in this book to mean "any solid fat" since they used to use it in that way before using it to mean Crisco. And, once again, shortening crusts did this on a good day:

For perhaps the first time, we had a pie crust that did this on our first attempt to get it into the pan:

I don't know why I seized on pie crust as a sign of being able to cook, but for some reason I did. I saw other people's pies at potlucks with the perfect hand-pinching and got so jealous at my ragged (but homemade!) crusts. I (don't judge me) read through directions for making your own puff paste, thinking they were utterly insane. How can anyone try to repeatedly fold pie crust back on itself when mine fell apart before I even got it to work once? And now, finally, it worked! I thought to myself, "Well, why not try the puff paste? You never know..." 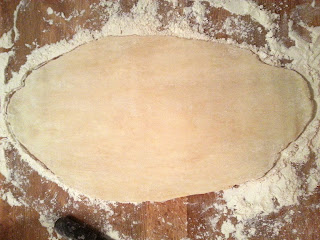 In theory, we would end up with these flaky, cheese-impregnated biscuits of deliciousness. Or so we hoped. 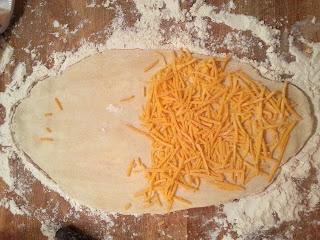 This is more or less the same way people who are actually good at pies make puff paste. You somehow produce pie crust that doesn't crumble or tear on contact with a rolling pin. You then take advantage of this to repeatedly butter the dough, fold it up on itself, and roll it flat again. There's a Wikipedia page on puff paste, but I don't recommend it reading it because (like most Wikipedia articles on cooking) half of it's in French and (because it's Wikipedia in general) there are math formulas.

Honestly, it's really not that hard to do if your dough is up to being folded up without breaking or crumbling. However, since even that so rarely happens in my attempts at pies, I can see why most people just buy frozen puff paste instead.

Please, take a good look at all the layers of (theoretically) soon-to-be-flaky dough and cheese. This may never happen again. 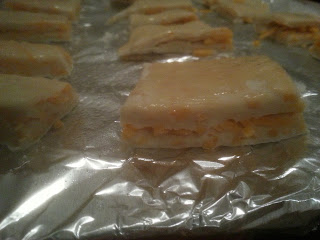 All right, let's see what came out of the oven! 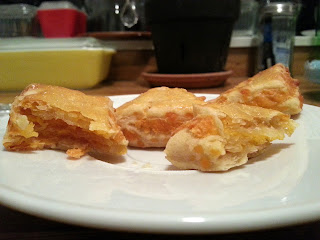 Holy shit those are pretty! You know what? Our Mom of Cookrye got out the good tablecloth for the Easter family gathering, so for the first time, we at A Book of Cookrye are going full food-porn with these things.

And if you're wondering how they taste... they're cheese-filled flaky bread. That should tell you all you need to know. So, if you're better at doing your own pie crust than we are, you owe it to yourself to make these.
Posted by S. S. at 4:07 AM