Today, we at A Book of Cookrye salute forgotten presidents! Unless you just finished your American history class, you may have forgotten we had a president named Rutherford Hayes. We at A Book of Cookrye had forgotten all about him too, but that's not stopping us from making one of his wife's cake recipes!
We recently visited Our Grandparents of Cookrye, and during this time we once again did Our Grandmother of Cookrye's homework. Previously we've read her book club novels and done the take-home questions for her that she could have scintillating discussion points at the next meetings. Now, we're doing bake sale duty! Yes, that's right, some unsuspecting churchgoers got to eat things made by us at A Book of Cookrye!
Per request, we produced two different cakes. This meant that perhaps for the first time, we actually made a full 1234 cake instead of half-size.

Now, we could have made two of these and had everything in the oven in about 10 minutes. But she asked we provide two different cakes. Did you know you can find a list of all our presidents' favorite foods here? It's amazing what working a desk job with a patron shortage will lead you to online. We decided to make this recipe for the bake sale because when we made it previously, it was pretty good.


We at A Book of Cookrye have twice featured first lady recipes before (see here and here). However, this recipe predates the country's interest in what Mrs. The President was cooking. At the time, publishing first lady recipes all over magazines wasn't the reader draw it is today.
Comparing this recipe to others on the Rutherford Hayes site, we did not think it came from Mrs. Hayes herself. Unlike a lot of the recipes posted there, this one reads not like some quick notes but like an old cookbook. We copy-pasted the first sentence of the directions into a search engine and indeed, it comes from a cookbook published right as Hayes entered office. It doesn't bother us that the recipe doesn't come straight from the kitchen invention of a former Mrs. The President, but we do wish the Rutherford Hayes website people had cited the source material. Of all the times not to cite your source, it's particularly ironic when you fail to cite a cookbook whose writer named what friends and relations gave her what recipes instead of claiming full credit for herself.


The original recipe starts off by saying "The cake is mixed contrary to the usual rules of making cake, but it is the best mode of making it fine-grained and delicate." We wondered just how contrary one can you get, and then we realized that we start off not by mixing a cake but making pie crust. 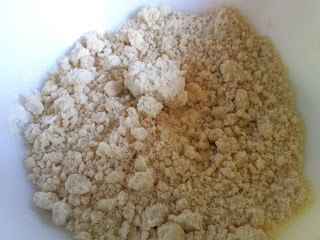 What sort of cake witchery is this? We'll have to set the pie crust aside for a moment because the next thing this recipe calls for beating egg whites into a meringue. This would have caused many an 1800's cook to cringe, but we at A Book of Cookrye have access to an electric mixer and therefore will make this happen with no effort whatsoever!
...or so we thought. You see, we could find the beaters but not the motor. However, what should turn up in a drawer but this!

Well, it beats attempting to beat them with a whisk. We've previously mentioned how housewives across the country had good reason to enthusiastically receive the rotary egg beater (you've got to read this lady in the 1800's praising its existence here). Well, now we're going to see if we've got what it takes to be a late 1800's cook armed with the very latest in time-saving devices. 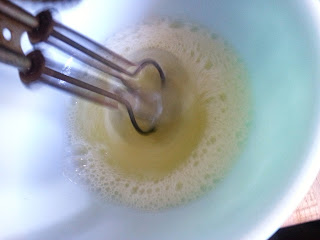 Things were going pretty well at first, but it got really hard to turn that tiny little handle after a few minutes. The eggs put up a lot more resistance than we thought would make sense, and we kept having to take it out and crank it in the open air to make sure it wasn't stuck. Every time, the beaters turned quite freely, proving that we would be stupid to invent a time-travel machine for the purpose of challenging a woman from 1892 to an arm-wrestling match.

It's not that the egg beater was difficult or exhausting, to operate, but using it entails a long time holding a maddeningly tiny little handle. We had to periodically set it down to just open our hand.

However, imagining ourselves in the place of someone who had to use either a whisk or a dinner fork, this indeed did save our cake-making selves from over an hour of work. We went from a few egg whites in the bottom of a bowl to this in twenty minutes. We'll grant that twenty minutes is a very long time to someone with an electric mixer, but from the perspective of someone who spent the duration of a Lord of the Rings movie having at a bowl of egg whites with a whisk it's nothing short of miraculous.

Please, behold the marvelous invention that saved our would-have-been-weary wrists.

Meanwhile, off to the side, we had what looked like the beginning of pie crust. Only, we're not making pie crust. We're putting these hand-beaten egg whites into it so it'll be cake. 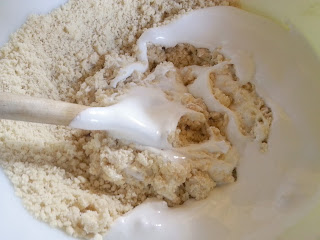 And so, we somehow managed to take the top of a lemon meringue pie and the beginning of the crust to put it in, put them together, and produce cake batter. Not just normal cake batter, but really good cake batter. 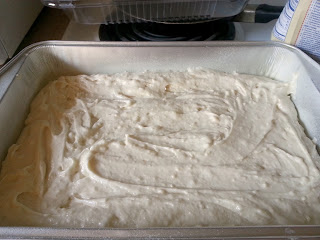 Look at how gloriously light and foamy it is coming out of the oven! You don't even need to cut out a piece to see how good this is going to be! 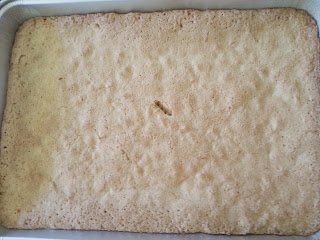 Since this was for a bake sale, we couldn't get pictures of a slice. However, we did get a phone call from Our Grandmother of Cookrye saying "It was to die for!" She reports it sold out very quickly, and that she really liked the purportedly tiny piece she helped herself to.
We at A Book of Cookrye would like to salute Lucy Webb Hayes for saving this recipe out of a cookbook, Mary Newton Foote Henderson for writing the book from whence it came, Miss Eliza Brown for giving her the recipe for her book, and the inventors of the Dover egg beater, without whose marvelous creation we'd have never been able to make this delicious cake.
Posted by S. S. at 2:44 AM