Remember when we attempted this?

You may recall that the last time we tried this recipe we just mixed everything, dumped it in a pie pan, and baked it. The result was scrambled eggs floating in this brown stuff that was burnt on top.
However, this recipe seemed like it would be good if it actually worked. Also, this is a community cookbook. Theoretically, all the recipes are ones that the contributors were particularly proud of and therefore are guaranteed to work. Furthermore, not only did they publish the names of each recipe submitter, but they also put her address. If a recipe failed, you would know who to blame and where to find her.


It seemed we made a very simple, easily-corrected error in our first cinnamon pie attempt. This pie theoretically could easily fixed with a double boiler.

Indeed, this recipe yielded a really nice custard. However, as much as the kitchen smelled delightfully of cinnamon by the time it was done, the contents of the pot tasted curiously bland. It seems that over the course of the extended boiling, all the cinnamon oil evaporated right out of the pie-to-be. Fortunately, this was easily fixed. And in future makings of this recipe (which surely would prove so good as to be made again and again), it would be very easy to just add the cinnamon after taking it off the stove.

All signs pointed to this being a successful recipe. Our Mom of Cookrye had tried some of what remained in the double boiler and said it was delicious. The pie itself looked amazing, even if it didn't fill the pie pan as much as one might wish.

We brought this to Thanksgiving with great excitement. However, as is often the case when bringing experimental recipes out in public without first making sure they'll work, this pie never actually set. It was basically a slightly runny pudding that happened to be in a pie crust. You could put it in little Dixie cups (for bonus points, with a blob of whipped cream on top) and been the hit of any potluck. However, this recipe was sold as a pie. And so, no one really ate it. It spent the day in my aunt's oven, steadfastly failing to set. 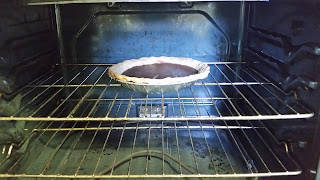 This pie's failure to actually turn into an actual pie is really galling given how good it tasted. How could you, Mrs. C C Norton of 1407 Girard Street in Los Angeles? Is there some crucial step we missed since you barely put any directions? Is there some ingredient you forgot to list? Why do you tease us so?
Posted by S. S. at 2:44 AM