Merry Christmas from A Book of Cookrye!

We started this year attempting to eat pudding out of a mayonnaise jar, and found the pudding all leaked out before we could eat it. It was a metaphor for what the year would bring.
As the first hours of Christmas arrive (in our time zone, anyway),  we at A Book of Cookrye extend wishes for a nice Christmas to everyone. Note: we didn't say wonderful or the loveliest or anything like that, just nice. All those other ones are too much pressure.
We would like to remind everyone of something else: You have the same right to be tired today as you do at any other time of year. So many people are grimly determined to put on Christmas cheer that they try to stomp out any sadness, frustration, or blatantly open displays of fatigue in their vicinity. Others think that being jolly on Christmas is a capital-D Duty. If you're happy today, then be happy. But if you're not, no one says you have to be. Well, all right, a lot of people say you should force yourself to be happy anyway, but you can ignore then and leave them to frantically wear themselves out in the name of the holiday spirit. If you're a bit tired of hearing Jingle Bell Rock on the radio for the fifth time this morning*, you have the same right that you've always had to change the station or turn it off. Don't make yourself miserable trying to force yourself to enjoy this day as much as possible.
And, as a special note to anyone who will have guests over (related or not), don't fret about obsessively removing every bit of dirt and each smudge from every corner of the house. If the people coming over would mutter in disapproval that there was -O the horror!- fingerprints on the windows, they will snoop and find some spot you missed in your cleaning efforts no matter how thoroughly you scrub. And anyway, why worry what such picky, persnickety people think? You already know they won't be satisfied even if you hand-stenciled the platters. Such people never approve of anything, so you may as well let them be their disapproving selves while you relax instead of hunting down every last speck of dust in your entire house.
On a more materialistic note, Marcus noticed my "subtle" hints and got me an Otamatone! 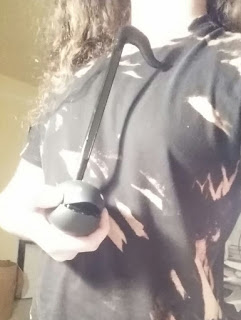 And so, we at A Book of Cookrye are spending the earliest hours of Christmas morning attempting to play songs on a Japanese squeaky toy. Merry Christmas everyone!

I'm leaving this here because Connee Boswell is awesome and I love her voice.

*As an aside, at least one radio station in my city switched to 24-7 Christmas music in early November and have been playing the same 50 recordings ever since. Even if someone likes Christmas music, surely they would get tired of hearing so many people perform vocal gymnastics to the tune of Oh Holy Night before December began.
Posted by S. S. at 12:46 AM