Vanilla Pudding: or, A Book of Cookrye welcomes the new year

Like many people who make New Year's resolutions, we completely forgot about it shortly thereafter. Besides, we live in an area where transit is so sparse one must make quite a detour to use it. However, as the last week of December arrived, we thought to ourselves "A whole year and we couldn't get on a train once?"

While many people's resolutions involve a workout regimen to forget about within two weeks or some other self-betterment to be hastily given up on, we at A Book of Cookrye made a resolution involving eggs and sugar.

As we at A Book of Cookrye look back on 2015, we see hours of calculus (so many we burnt the book and poured a salt circle around the grill afterward just in case-- this is not a joke) and other classes we did our best to ignore. 2015 saw the death of our mixer, the theft of our only teacup, and the cracking of our only bowl. 2015 also saw our discovery of pink cherry-lemon cake, zucchini bread (which we've never made before), and the surprisingly good cucumber-lemon bread (because cucumbers look the same as zucchinis DON'T JUDGE ME).

2015 was as good a year as any for us, on average. So, on this cold day on late December, we wonder what 2016 brings. We could wish for world peace and stable funding for libraries, but people wish for those every year and they have yet to happen. So instead we wish for things on a smaller scale. 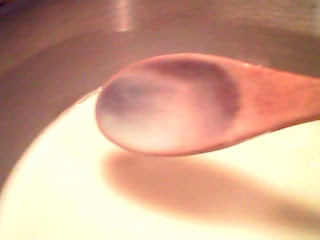 
And here is our 2015 resolution, all ready to take on the train and go! We are pleased to note that this is a repurposed jar of light mayonnaise. (Those who worry about us chucking out the contents of an entire jar of mayo: rest assured, it was rehomed to a plastic container and returned to the refrigerator.)

However, it turns out that mayonnaise jars do not hold pudding well, as we found out when we checked the back of our bicycle upon reaching the station.

Fortunately, a few spoonfuls remained in the jar. It's hardly the experience of snarfing down a generous helping of pudding from a mayonnaise jar we hoped for. But ultimately, we did our resolution the same way we do everything else: half-assed and at the last minute. 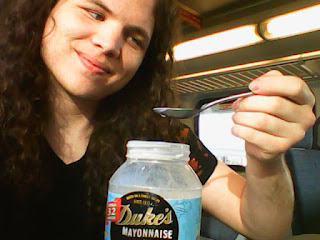