Raisin Cake from Paraguay: or, It's like mincemeat but not quite

It's not beginning to look like Christmas, the season is reaching its big climax! This looks like it's been a very traditional Christmas here in America. The first fake pine went out in the stores somewhere around September as has been done since the early 1900s, along with the usual articles bemoaning that Christmas starts in September. We had the usual spate of people screeching about The War On Christmas, as we have every year since I can remember. And of course, the radio has been playing the same short playlist of Christmas music (we had to switch radio stations after being subjected to one to many repetitions of El Burrito de Belén), causing us to wonder if anyone has ever produced a recording of "Let There Be Peace on Earth and Let It Begin with Me" not sung by charmingly tuneless children.
We at A Book of Cookrye have been avoiding a lot of it, as we do these days. We realized a few years ago that a lot of our resentment of Christmas was that it felt like an obligation. Eventually, we realized that actually we don't have to buy stuff for people. We don't have to listen to 5 singers try to come up with their creative spin on Jingle Bells- this isn't North Korea, we can turn the radio off. And we don't have to draw up a list of people to whom we are contractually obliged to give presents. And most importantly, we don't have to nail a massive smile on our face in the name of Christmas cheer. We reserve the same right to be openly tired at Christmas as we do the rest of the year. Having realized that we don't have to do all those things leaves us with a lovely day to bring out all of the really fun recipes, see our family, and if we happened to see something we thought someone would like, give it to them.
Which brings us to, very cautiously, busting out a Christmas recipe.


This comes to us from Paraguay's chapter in The Complete Round-the World Cookbook. We at A Book of Cookrye, knowing nothing about Paraguayan food, don't know whether it really is something one would find on a lot of tables in Paraguay (or would have found in the 50's when this book was published) or if the recipe was heavily altered for American audiences. We actually lean toward the former since a lot of our friends have flipped through their home countries' sections while saying things like "yep, my Mom makes something like that... yep, we eat that all the time..."
You may think a 1950's book of international recipes is suspect, but even the recipes from India apparently are correct. I was very astonished when I was making a lentil curry (the main ingredients were lentils, onions, and boiled eggs, so it appealed to my grocery budget) and one of my friends from India came into the kitchen, saw me standing over the pot, and in astonishment asked "Where'd you learn to make that?"

This cake isn't listed as a Christmas recipe, but it seems like something we in America would bring out at this time of year. Which brings us to the reason why I earlier said I cautiously bring it out. You see, in my house, my dislike of forced Christmas cheer and the attendant saccharine rituals has made it difficult to admit there's anything about Christmas I actually like. If I were to say I liked a Christmas song, then every time it came on the radio someone in the house would turn the volume as high as it goes while saying "LOOK IT'S THAT SONG YOU LIKE DON'T COMPLAIN YOU SAID YOU LIKE IT".


Although if we at A Book of Cookrye were to be thoroughly honest, the main reason we consider this to be a Christmas recipe is that as soon as the raisins cooked a bit, they made the same squelching sound as the mincemeat Fanny Cradock was slapping onto everything in her TV show.

I must admit I watch Fanny Cradock specials with fascination. She was the biggest TV chef in the entire UK, and they couldn't come up with a sink with running water? And what's with scaring her poor assistant into silence and then making her wear a shroud so that there's only one "attractive" woman on the set? (Although we give her credit for things like applying egg wash to the tops of her pies with her fingers because otherwise you'd have to come up with a brush and then wash it.) But, the point is, be sure to see part 2 where she puts mincemeat into a half-cooked omelet  and covers it in powdered sugar. Consider the videos to be A Book of Cookrye's Christmas gift to those who love the more bizarre aspects of the past.

And so, we at A Book of Cookrye set the raisin-nut stuff on the marvelous ventilated cooling rack.

Because we at A Book of Cookrye feel like giving at this time of year, this is our gift to everyone who was traumatized by the raisins. Behold, for we have made delicious, brown sugar-y cake batter!

The cake was a couple of shakers away from being a very rich spice cake. It was marvelously thick when we spread it in the pan, and tasted amazing. 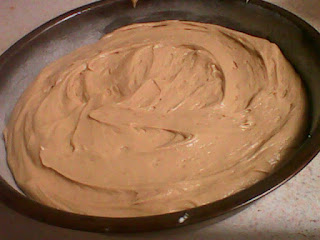 And now comes the part where we upgrade (or downgrade, depending on your opinion of the title ingredient) this from an ordinary cake to a raisin cake!

We thought the batter would be hard to spread on top of the raisins without just mixing it all together and spearing it about with the spoon. But the raisin mincemeat got very firm once it cooled down and the batter just sat right on top and and spread very easily.

By "the batter spread very easily", we of course mean it sort of mixed with the raisins but mostly stayed on top of everything. We at A Book of Cookrye were slightly annoyed, but decided that we'd be better off being like the princess in Frigid and letting it go. 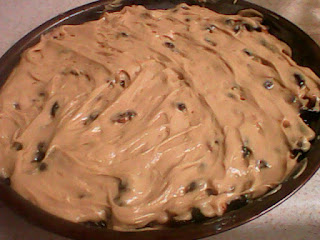 The cake smelled so wonderful in the kitchen right up to when we joined some people watching Rick and Morty. Television may not be ruining our lives, but it did unfortunately have some negative effects on our baking.


However, this cake was more than easily fixed.

And this is why we said this is a Christmas cake. It's good, but you will definitely be full after you eat it. If you have this after dinner, you'll be sated for hours. It's absolutely delicious, and just the sort of thing you'd serve after a big dinner this time of year. 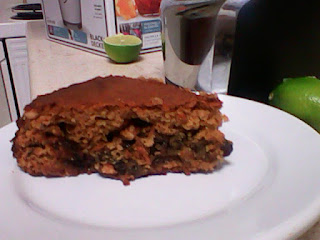