When last we saw the delicious dessert bread recipe, it was blissfully immersed in a drench of orange and coconut. We thought that the bread was good on its own, and thus wanted to take it out of its native citrus habitat and see how lovely it tastes by itself. Then we read that in some parts of the world, cinnamon rolls are called cinnamon snails. That was motivation enough to make them. 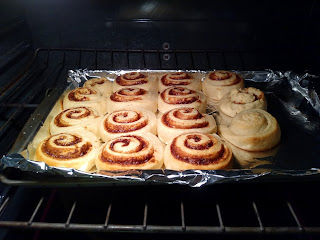 My friends and I, when making cinnamon rolls at 3 in the morning (as one does), would always just press them right up next to each other before letting them rise. Like every pan of brownies has corner pieces and center pieces for those who prefer them, you get some that are totally soft around all sides, and the ones that baked on the edge have a nice crispy brown on them after they're done. But no one here has any particular preference, so I just baked them like a normal person instead of clustered together like a bunch of cinnamon-snail grapes.

Of course, you will note that one of the rolls on the pan has no cinnamon. I really wanted to see how good this bread tastes unadorned because the dough was very promising. It's not as sweet as I expected, and the tartness of the sour cream bakes away. I was expecting a sort of dessert bun, but instead this dough is the makings of some very good, subtly sweet dinner rolls. If we're still doing the slider craze (I think we've collectively gotten tired of sliders and returned to full-size sandwiches), this recipe would be perfect for them. 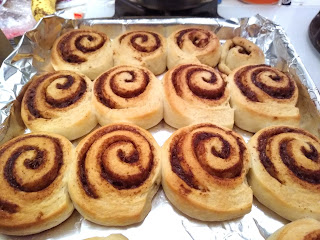 Of course, here in America we always cover our cinnamon snails (or cinnamon rolls if you prefer) with a tremendous flood of cream cheese icing. 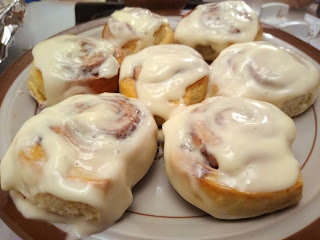 I think it says a lot about America as a country that these are considered a breakfast item. We didn't serve them like that this evening; we dropped the lie and ate them for dessert. They were absolutely delicious. The bread has a subtle flavor that adds to the cinnamon-cream cheese experience rather than just being a vehicle for lifting cinnamon, brown sugar, and icing into your face.

Anyway, the cinnamon-free cinnamon roll was so good that we decided to use this bread recipe to make sandwich buns. This time, we added a handful of whole-wheat flour to make them look cute and speckled, and also to give them an ever-so-slight change in flavor. We also learned that we are just not very good at shaping hamburger buns. 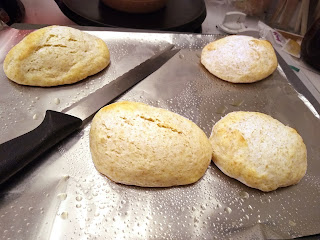 We had done one of those recipes that basically involves a slow cooker, a slab of meat, and whatever you want it to swim in for a few hours. Lately, meat prices have been weird. The big roasts that usually end your bank account have been cheaper than the ground beef or pork. We got a pork loin too long to put in the freezer without cutting it for a far lower price per pound than the ground meat just a few shelves away. 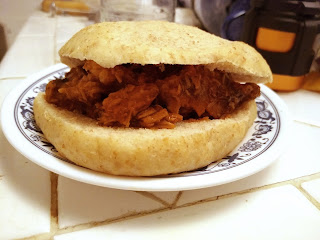 At any rate, this bread recipe makes for delicious plain rolls, but I wouldn't use it for sandwiches. It's a bit too soft and delicate for holding a sandwich together. We ended up just eating most of the "buns" like oversize dinner rolls. Which... if you ever make the original recipe, definitely consider doubling the bread dough and baking a batch of dinner rolls alongside that orange-and-coconut delight.