We at A Book of Cookrye would like to take the time to salute our long-lived electric mixer, which recently decided it had lived long enough.

Estimated to have entered this world in the 70's, the Book of Cookrye mixer was at least old enough to have been made in the USA. It was very good to us while it lasted, but now is not the time to do without a replacement.
We at A Book of Cookrye began to ponder what we might get to replace it. Hand mixers tend to have relatively weak motors. While we do have a stand mixer sitting under the counter at our parents' house, we haven't got the space for it. Since we have half a bedroom and no more personal space to store anything, we cannot have very many bulky things. Actually, we have room for very few single-purpose devices, which leads us to the replacement...
How many people can use their mixer to hang pictures and assemble IKEA furniture? It's like finding out your floor wax is also a dessert topping! After first testing it with some really simple just-put-it-in-a-bowl-and-stir recipes, we decided to really put it to work. While considering what recipes might be worthwhile for our mixer (in an electric mixer promotional cookbook, of course!), we found this one:

I think a meringue shell with whipped cream and whipped custard is a pretty good way to test an electric mixer, don't you? Well, it doesn't show how well the mixer does with really heavy loads, but we'll perpetrate something else to try that out later. Let's get to the meringue!

Unfortunately, it seems that a power drill is not the best implement for whipping things. As soon as the whisk gets spinning, it kicks whatever you aspire to whip to the sides of the bowl instead of forcing air into it. We had better luck tipping everything sideways, but it seems something about the way two beaters on a mixer turn into each other are better for whipping things than one whirligig with a motor attached.

We at A Book of Cookrye have done a lot of meringues because they're tasty. Every time we do, we wonder how this happened when we made kisses.

Seriously, that's not just stiff peaks, that's fearsome spikes of sugar! But most of the time, regardless of how stiff we beat the egg whites before adding anything, they get really floppy when we add the sugar to them.

Seriously, and this isn't the first time our meringues have gone flaccid on contact with sugar, no amount of beating them has ever produced that stiff a meringue ever since. After about ten minutes on high speed, we gave up and figured we'd just pour it in the pan and hope it didn't melt into something flat in the oven.

While we've got the custard beating, let's pause and discuss the viability of power tools as kitchen implements. If you look around on YouTube, you will find many people using power drills to make cakes. However, they seem to shy away from recipes that involve an extended beating time. We at A Book of Cookrye are here to tell you that if you do make something that involves an extended beating time, do not use a cordless power drill. The battery pack gets heavy quickly when you're holding it up over a bowl for 10-15 minutes. We ended up having to take a page out of Miss Leslie's book and hold the thing at our side because it is too fatiguing to extend one's arm while holding a weight for that long. Also, unless you invested in a good cordless drill, you will have to recharge the battery between beating the egg whites into a meringue and getting to the rest of the recipe.
After letting the battery and our arm recharge, we got to putting the lemon in the lemon schaum torte. We beat the yolks until thick, but they turned gray instead of lemon-colored. 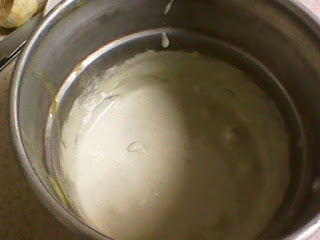 You can really tell how gray they ended up when you see the lemon peel in the pot with them.

Meanwhile, we withdrew the meringue shell from the oven. It actually looked pretty good. I mean, it's basically a meringue cookie but made to American portion-size standards, so it was guaranteed to be delicious whether we went on with the rest of this schaum torte business or just ate it as-is.

However, despite all the greasing and flouring of the pan, it did not want to come out. We prodded at the sides with the handle of a tea strainer. We held it upside-down hoping it would fall out. Eventually, we put it upside-down on the counter and soundly thwacked the bottom of the pan. Behold how well that worked!

The ultimate removal process involved deciding that no one was going to see the damage once we covered this sucker in whipped cream. (Incidentally, we're assuming that the recipe writers left out the instruction to add sugar to taste to the cream when whipping it. I mean, would you want a mouthful of straight cream?)

We at A Book of Cookrye took the liberty of tasting the lemon filling, and it was really good. You could have dumped it into a pie shell had the lemon pie of your dreams. We had to keep how good it tasted in mind when facing the fact that it looked like boogers. 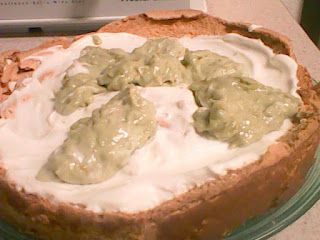 It looked even worse when we tried to spread it over the whipped cream. Now we had weird curdled nasty-looking things suspended in white stuff. 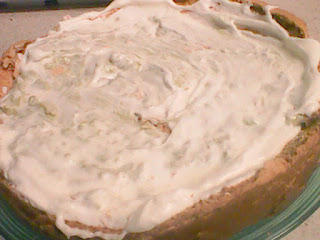 But once again, the whipped cream hid many sins. Behold!

You'd never guess that earlier this looked like it was a snot sandwich. 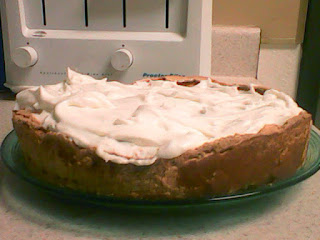 Now came the most painful part of this recipe. We would not have made this had we read this far down in the instructions before beginning. Tragically, it says "Chill in refrigerator 24 hours." CURSES AND DRAT! I have no shame in admitting we made a batch of cookies because we'd been banking on having dessert tonight, not in 24 hours. Besides, we had to face the reality that the snot filling would once again be visible when cut.

Incidentally, that plate came to us by way of a weird anonymous gift. I came home to find it stacked with my dishes (which are on a stand next to the door). My roommate told me someone knocked, then reached through in door without getting more than an arm in the room, set the plate with the dishes, then left without saying anything.
The lemon shaum torte was divoon. It was amazeballs. It was orgasmic. It's like a lemon meringue cloud of deliciousness. If there was ever a recipe that justified getting an electric mixer instead of doing it all by hand, this is it. If you don't have an electric mixer, go forth, get one, and make this!
Posted by S. S. at 4:43 AM