Homemade Garlic Knots: or, My math class is cancelled!

Ever felt like all your woe and misery just melted in your brain and came pouring out through your ears? Well, we at A Book of Cookrye have felt that delightful, divoon state of being! It almost felt like I was in a rain of misery, and that all the negativity clogging up my head been washed away and was dripping to the floor. Want to know what caused this all-consuming frisson of happiness? My math class was dismissed an hour early, and the teacher announced that the next class is cancelled!
I came in from class and shouted "MY MATH CLASS GOT OUT EARLY AND GOT CANCELLED NEXT WEEK!" Everyone in the common room started clapping! It was like my joy spread to everyone!

To celebrate this marvelous liberation (and the sudden gift of a lot of free time), we at A Book of Cookrye decided to pull out an idea we've been sitting on for some time: Garlic knots! There's this pizza place up the street from us that makes some really good garlic knots that you get free if you go during lunch hours. We at A Book of Cookrye decided to use some garlic sauce we pinched from the last time they ordered pizza for everyone doing theater sets (see how divoon we think garlic sauce is here) and see if we can't have garlic knots in the convenience of our own domicile.

Do you want to know what else we at A Book of Cookrye are delighted to celebrate? Check out this price tag!

And so, we at A Book of Cookrye, like all Americans, begin this delightful, delicious, de-lovely recipe like so many Americans would: a blob of solid saturated fat! 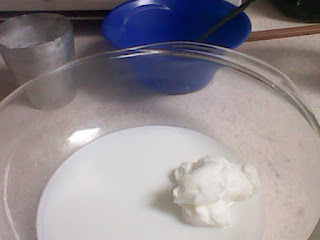 The one thing that concerned us was whether the 25¢ yeast would actually rise. Was it marked down because it had all died and was sitting in the envelope all sad and deceased? However, the thin runny proto-bread sludge smelled very strongly of yeast. So we figured the little yeast granules must still be alive!

You know what, let's pretend that we didn't have to add extra water because it was too dry, and then add more flour because we overwatered it and made it pathetically runny, and had to continue compensating with ever-stickier hands until we could knead it. We'll just skip to the part where we kneaded it because we finally got the bread dough to come out right.

It may be that the yeast was 25¢ (and we are more than slightly delighted that we need to use a cent sign to type out the price) because it took a while to wake up. However, after spending a while in the warm oven, the yeast eventually started furiously flatulating that the bread could rise. And so, we at A Book of Cookrye got this!

All right, this is where we get to the super exciting part: turning what would have already been some delicious bread into some divoon garlic knots! With garlic!

We originally thought we would take the "knot" in "garlic knot" literally. We thought we'd roll the dough into snakes, slather them in garlic sauce, and knot them. That did not work. The dough refused to stay in knots. so we ended up doing this like cinnamon rolls.

We at A Book of Cookrye then realized that we lacked a pan big enough for baking these all at once. The idea of baking in batches gets a lot less appealing when you realize that you'll have to wait for each batch to rise. Instead, this happened:

A protip for those doing this at home: If you use only one layer of foil, whatever you set on it will immediately fall between the bars on the oven rack. You want at least three layers so it's sufficiently supportive. You know this has been a long semester for us at A Book of Cookrye because someone else had to suggest we layer the foil. We had been staring at our carefully shaped garlic rolls falling through the oven and muttering "Shit!" and unable to think of any way to come up with something to make this work.

We knew these would be good because you could see all the garlic sauce soak into them as they rose. None of it dripped away; it all went into the bread. The smell coming out of the kitchen as they rose was amazing. So many people came into the kitchen asking what was cooking ("Garlic bread? Can I have one when they're done?") that we began to deeply regret cutting the original recipe in half.