Silver and Gold cakes: or, Is it worth waiting for these to rise?

We were thinking about replacing the pan, but we're moving out very soon anyway so we figured we'd do without and either bake in the pot or fold little pans out of foil. However, whoever took it put the empty pan back on top of the refrigerator two days later.

To celebrate getting our poor overworked and only cake pan back, we present two nearly-identical recipes! We actually respect the cookbook writer for economizing. You see, the first cake recipe calls for a dozen egg yolks. However, it'd be such a shame to throw out all those egg whites. Abby Fisher, from whose cookbook these recipes come from (previously featured here), apparently thought the same. For what should follow the recipe for a dozen-egg yolk cake but one that calls for a dozen egg whites!


We did both of these cakes in two nights (what else were we going to do with all those egg yolks left over from cracking all those egg whites?), just to see what happened.

We were reading the cake recipes in this book to see what late 1800's cake recipes looked like (you'd be surprised what you find interesting when you have to restrict your web browsing at work to things that will not embarrass you or the organization should patrons see the screen). Aside from the fact that one of the recipes ended with instructions for the dampers on your stove, the biggest difference from one published this century was that both of these recipes use yeast.

We wondered what the heck a yeast-raised cake would taste like. So, with a massive math final looming over us, we naturally avoided studying at all costs and made for the kitchen. Besides, since our mixer died, we whip egg whites like this. 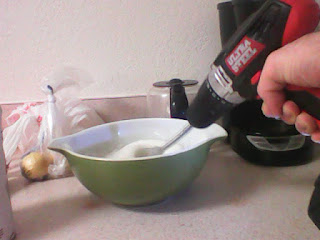 Now, we at A Book of Cookrye would like to say that we've finally gotten good at this whole folding-in-egg-whites business. We can fold the heck out of egg whites and whatever we fold them in will still be foamy(ish).

You can therefore imagine our disappointment when we found that the recipe calls for so much flour you have to beat the crap out of the batter and lose all the air you just carefully incorporated. 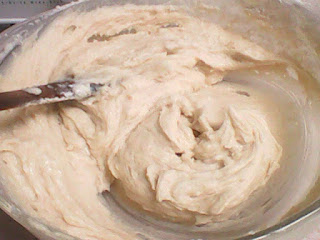 But, figuring that the jelly cake did the exact same thing but rose anyway, we hoped that the whole stiffly-beaten egg whites business was in fact going to pay off and somehow having beaten then re-flattened the egg whites would make the cake rise until light and fluffy. 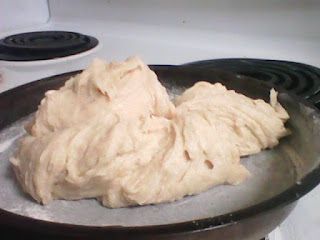 As much as we like dense cakes, we're not going to do all this business with beaten egg whites and busting out the yeast to do what we could have ready to bake in less than 5 minutes. 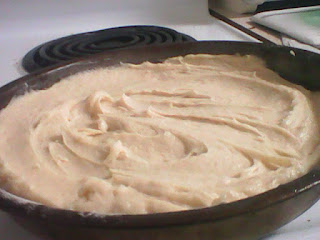 The recipe doesn't mention letting the cake rise, but it seemed an obvious step. Why would anyone put yeast in a recipe and then not let it rise? The batter rose surprisingly slowly given that there was plenty of sugar in it for the yeasts to eat. But, more unnervingly, the butter started to separate out and float on top. You can see little butter puddles forming on top of the batter. 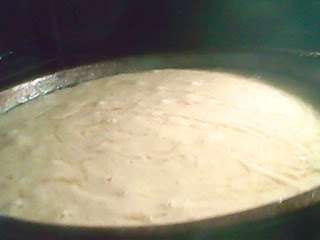 We gave it two hours during which time it barely if at all rose), but eventually we decided that we'd take a short cake rather than wait even longer for it to rise. However, once the oven got hot, it rose to nearly the top of the pan! 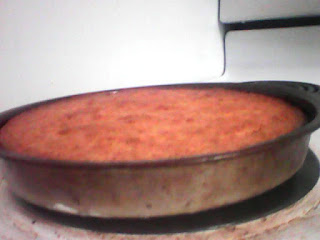 That's the silver cake done. But what might one do with all those egg yolks? We make a gold cake, of course!
This may surprise you, but since the  recipes for silver and gold cakes (does anyone else have that song from Rudolph the Red-Nosed Reindeer in their head after reading that?) vary only in which part of the egg you use, making the gold cake was just about identical to making the silver cake.

Now, we at A Book of Cookrye are, we will admit, prone to the odd baking mistake. When making the silver cake, we were too caught up in thinking "Gorsh, who knew you could put yeast in a cake?" to remember that we were supposed to add milk to the batter at some point. We did remember to add it when making the gold cake, and it made no visible difference. Upon seeing the recipe call for half a teacupful, we even messaged a friend who has an old tea set asking her to measure how much one of the teacups held (answer: exactly ¾ cup).

And now, we present, the Silver and Gold Cakes! 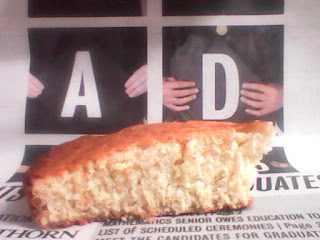 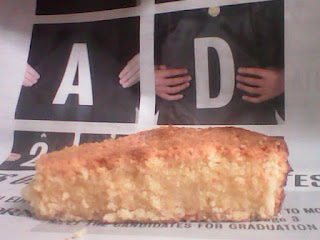 As you can see, the gold cake is the exact color of cornbread. It also dented really easily (you can see some dents where my fingers were as I lifted it out). The silver cake is more of an off-white cake than a really white cake.
Both of these cakes were really good. The silver cake tasted a lot like the sweets at a Mexican bakery, and we weren't the only ones who thought so. Specifically, it's a lot like the pandulces with the sesame seeds on top. Since hardly anyone puts yeast in cakes these days, the yeast flavor made one confused. It's like, the yeast tastes like bread, but it's actually cake. As someone else said, "It's one of a kind." The almond extract in it made every girl who tried a piece say "It smells kind of like my lotion!"
The gold cake tasted more like we would expect a cake to be today. However, it was really crumbly. The yeast changed the flavor just enough that most people did not recognize it as lemon. One person thought it had ginger in it. Someone else said it tastes like Christmas cookies.
However, everyone who tried a piece of either cake really liked it. They're just different enough from a modern-day cake recipe to be intriguing, and both of them are seriously delicious. So, if you were already going to make yeast-raised bread, why not put it to the side of the oven and let a cake rise next to it?
Posted by S. S. at 3:57 AM