Queen Muffins: or, Bringing the Depression to a hospital

Misfortune has struck near the house today, and we ended up having to pay someone near to us a hospital visit. You know when you find someone's really sick, you want to come up with something you can do besides sit at their bedside and utter reassurances? Well, we at A Book of Cookrye decided that one of the most welcome things at a hospital is food from the outside world. And so, we're bringing...

Yep, nothing like bringing a taste of the Depression to someone who's already sick!


We decided to use half whole-wheat flour to make these healthier (note: those doing so should consider adding an extra spoon or so of milk). And also to add blueberries for the same reason. After all, these are for people who might not have had anything but hospital food since they came in to offer support.
And look at how healthy these are from the very beginning!

The recipe says to dump the eggs, shortening, and sugar in all at once and then mix it. Usually, we add the eggs after the other two are mixed, because it prevents... this.

Turns out our mistake was doing this with a spoon. If you get out a whisk mercilessly flog what's in the bowl, you end up with a smooth batter like this.

Incidentally, because we ran short of milk, we ended mixing it with water. Surely Mrs. George O. Thurn, aware that a Depression is on, would forgive us stretching ingredients.
Because the fresh berries always seem about as flavorful as Styrofoam with a few drops of fruit juice on it, we got frozen ones instead. As many people know, when using frozen fruits in cakes, breads, and the like, one should stir them in straight out of the freezer. Otherwise, they will ooze out juice as you mix, which always seems to turn the batter an unfortunate gray instead of a pretty fruit color. 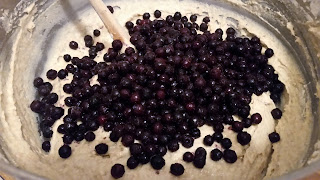 To that advice, we at A Book of Cookrye have an addendum: Don't trust the supermarket freezer, especially if it's one of those open ones. Put the fruit in the coldest part of your freezer for a while so it gets frozen really solid. Otherwise, you may still get this: 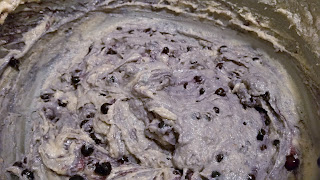 I wouldn't care about the fruit juice oozing out and coloring the batter if it ended up looking pretty. But no, the batter now matches the hospital paint. 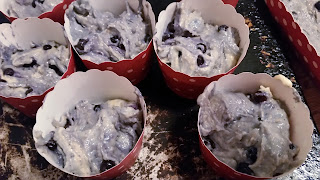 Hoping to make the muffins slightly less rock-colored, we spooned the last of some forgotten cake glaze over them before baking. Mrs. George Thurn would surely approve of thriftily using up the last of leftovers. 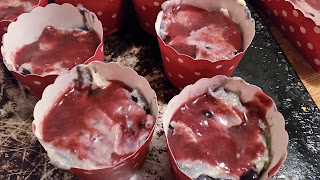 However, here our thrift backfired. While the strawberry stuff did indeed hide the rock-like hue of the muffins, it did so by making them look like they had nasty scabs.

However, all misgivings about their appearance proved pointless upon bringing them to the hospital. Anything looks cheerful compared to the invariably dreary-colored rooms and fluorescent lights.
Anyway, this recipe is exactly as promised: a good basic muffin recipe. Like a lot of the better recipes in Mrs. George O. Thurn's book, it tastes old-fashioned in a good way, like a recipe handed down from someone's great-grandmother. In other words, these muffins are pretty good.
Posted by S. S. at 10:59 PM