Today on A Book of Cookrye, we salute our sister-in-law on her birthday! (At least, I think it's her birthday. If not, it's close enough.) Yes indeed, she was brave enough to marry into this of all families.
Her birthday being a few days after Mother's Day, we decided to celebrate it on that Sunday. A Mother's Day gathering among relatives had been planned for some time. Whenever a lot of people in the same extended family manage to free up the same day, any nearby birthdays, anniversaries, or the like get celebrated all at once.
Originally, I was going to make a lemon cake since lemony things are always popular at family gatherings. But Our Mom of Cookrye dropped some subtle hints that a strawberry cake would be really nice. By "subtle hints" I mean clipping multiple strawberry cake recipes and handing them over. It's rare that anyone puts in a specific request instead of "Oh, whatever you think would be good," and therefore, I made... this!

Well, that was the recipe I started with, anyway.
Strawberry cake recipes are surprisingly rare, and most of the ones I found start the ingredients list with "one box of white cake mix." So, I figured swapping out the applesauce in this recipe with blenderized strawberries (and removing the spices, nuts, and raisins) would result in a cake-like substance. Though the original recipe actually looks pretty good and I'd love to try it.

You may notice that aside from replacing apples with strawberries, the only ingredient change was reducing the sugar. This is not at all because the sugar ran out while measuring it. I simply decided that the cake would be sweet enough for having strawberries instead of applesauce. I did not mutter "eh, close enough" when the sugar sack ran empty on me.
Poor planning aside, it turns out blenderized strawberries are really red. 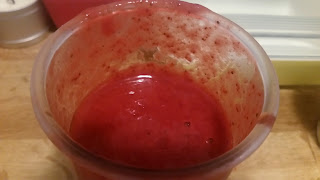 Strawberries aside, this recipe started out like almost any other cake recipe. By that I mean could not stop taste-testing the batter. Really, you could have just baked this as it was and it would have been an unusually lovely white cake. 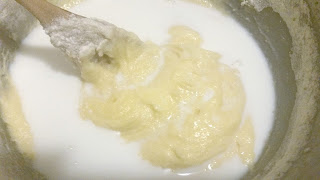 But we at A Book of Cookrye did not set out to make a white cake. Many birthdays have been marked with white cakes, and near everyone likes it, but this is supposed to be a strawberry cake. Therefore, let us bring forth the strawberries! 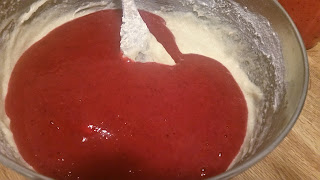 Looks like I had a fit of experimentation and dumped spaghetti sauce into a perfectly innocent cake, doesn't it? But the strawberries tasted so good. And the batter went so pretty and swirly as soon as I started stirring.

The cake batter tasted divine. And also look at how pink it is! Usually you need artificial flavor and food coloring to get something to be so tasty and also such a pretty color. 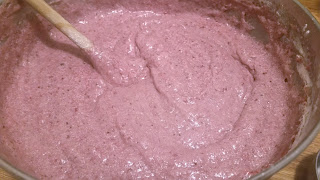 Originally, this was going to be a layer cake because, as aforementioned, it's for a birthday. But I looked at the extremely full mixing bowl of cake batter and realized that 1) We don't have that many pans and 2) I did not wish to spend half the night waiting for cake layers to cool enough to get them out of the pans for reuse. And so, from deep in the depths of the cabinets, a bundt pan was unearthed! It had accumulated a healthy layer of dust and deposits since the last time anyone baked anything in it. But it retained a stunning state of preservation after a quick wash, and also apparently bundt cakes are old-fashioned enough for people to like them.
Also, these days I always think of that scene from My Big Fat Greek Wedding whenever a bundt cake lands on the table before me. 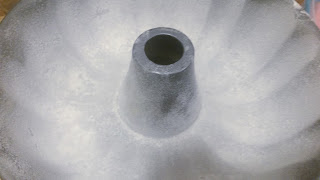 So you know, this recipe makes a lot of cake. Behold how high the waterline in the pan is!

I cannot lie, this smelled divinely and intensely of strawberries while in the oven. Between how delicious the batter was and the way it perfumed the entire house while baking, I was sure this cake would be delicious. However, I had some slight doubts when I removed it from the oven and it was not pink, not red, but brown. 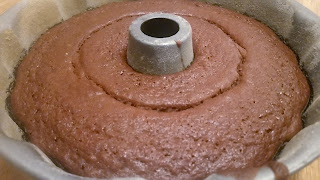 My initial theory that it just had a dark crust on top after spending so long baking was soundly disproven after getting it out of the pan. However, the cake smelled promisingly delicious and looked really cute. 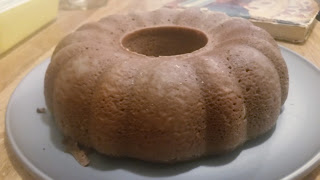 Granted, it didn't appear to contain berries of any form, but it ended up looking adorably festive once decorated.

All right, I can't lie that long. The cake looks cute, but it only looks like that because I cannot decorate cakes at all. Please, if you ever see me snipping the corner off a sandwich bag loaded with icing, snatch it out of my hands. Yet, because this is a birthday cake, I stupidly tried. 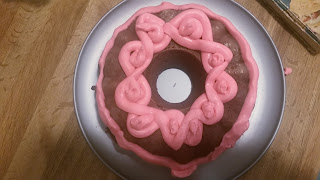 The design I attempted looks nice, yes. And in competent hands, it would have been quite charming. However, it only looked good from a distance. When closely examined (as one might when it is right in front of them at a table), my piping-bag shortcomings were embarrassingly obvious.

However, all was not lost. Every other time I've had cake decorations fail me like this, I've been able to immediately hide the damage by simply spreading the icing and pretending the design was never there. Indeed, the only thing you have after smearing the attempted art away is a cake that looks like you decided to put a coat of icing on top. 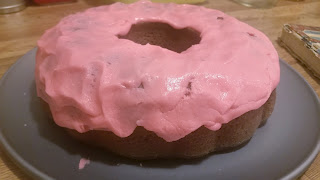 Well that didn't work. Can you imagine wishing someone a happy birthday, peeling away the foil tent, and revealing... this? It looks like someone put Play-Doh on it!
I was so unnerved. I've had many failed attempts at decorating, but this is absolutely the first that couldn't be fixed by smearing it with the back of a spoon. The lovely, probably-delicious cake was now hidden under a disastrous icing job. I yearningly thought of glaze. Why hadn't I just used glaze? Just a few seconds of pouring, and the cake would have been complete. Instead, the artful squiggles on the cakes in the supermarket bewitched me.
In desperation, I looked at the recently vacated oven. Doesn't icing melt into glaze if you get it hot enough? Didn't the cake happen to sit on a metal platter, thereby eliminating any worries about shattering glass or melting plastic? How long do you need to preheat a broiler?
Hoping for the best yet forgetting to light a candle, I put it under a broiler (set as hot as it could go) and anxiously watched. This happened.

The icing kind of melted. You can see how it sort of slumped onto the cake instead of sitting on top of it like a crown of modelling clay.  I briefly tried to convince myself it didn't look awful. Then I prepared everything else for the next day, but all the while, the ugly thing in the kitchen nagged at me. Eventually I wondered, how hard is it to get icing off of a cake? 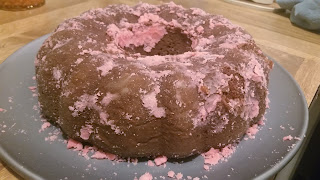 Humiliatingly, the cake looked better after an inept and desperate removal job than it had looked with an intact coat of icing. All I needed to do was hide the spots with glaze. And I am very good at glazing cakes. In compensation for my pathetic failures at cake decorating, I've gotten very good at dumping glaze on baked things. Behold how lovely the cake looks after a quick treatment of glaze, my faithful and failsafe standby! 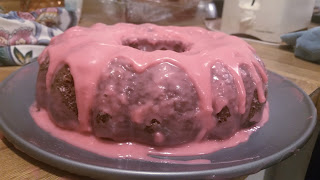 ....Yeah, that's worse. At this point I was having a mild existential culinary crisis. The cake I had so lovingly baked had become spectacularly ugly at my own hands. Every time I tried to fix the cake, it got worse. Now it looked like it had these grotesque wax drippings all over it, with a puddle on the plate.
I thought to myself, perhaps a decorative dusting of powdered sugar would offset the melted-candle look and make the cake lovely. 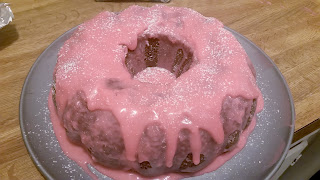 I eyed the results and thought to myself: Perhaps it looks better from another angle. 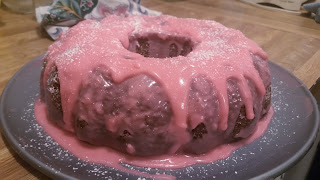 It's true that the powdered sugar did, in its own insufficient way, make the cake look just a tetch better. However, powdered sugar did not have any magical ability to save this cake from my alleged decorating. I asked myself how hard it would be to strip the cake again. After all, I'd already done it once. A few test prods of the icing showed that it had already hardened enough to lift a small chip off. 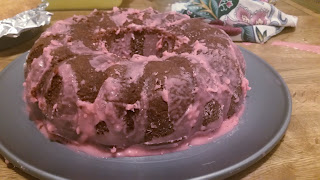 Yes, the cake looked better with the icing pulled off than it had a few moments earlier. However, it still looked pretty awful for something you're bringing to celebrate someone's birthday.
I'd like to point out the clean platter on which the cake sits. Notice that it has absolutely no icing flakes or thin smears. That's because I kept wiping it with a wet paper towel between icing attempts. It is really depressing when you can put wet towels on cakes with no damage whatsoever, but every attempt to ice a cake makes it worse.
I considered my options. The outside of the cake did not seem like it could withstand a third stripping (I was pulling off pieces of cake with some of the larger icing pieces), so whatever I did would be final. I just couldn't risk it again. Powdered sugar had made icing attempt no. 2 look slightly better. Perhaps it was just the thing to hide the splotches of bare cake and peeling icing. I even got out a strainer to sprinkle the sugar through to prevent any lumps from landing on the cake. 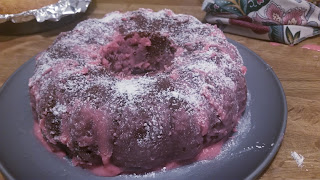 You know what? It doesn't look bad! It just needed a quick fix of scraping the crusted icing deposits out of the center hole. 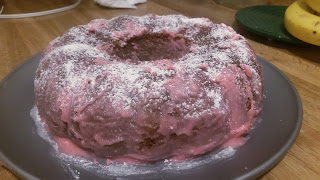 I stared at the cake, alternately thinking it looked cute and thinking it looked awful. Granted, there was nothing more to be done for it at this point. It threatened to fall apart when I tried to pick off any more icing. I tried to make peace with the cake in its final form, and in the end had to reach out to unsuspecting friends: 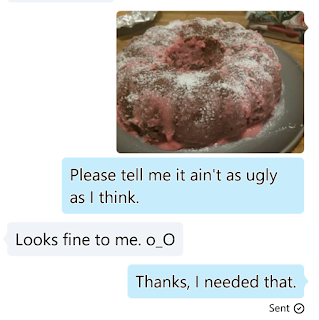 It must have looked better than I thought, because everyone said it looked lovely! Either that or they were trying to be nice.
But regardless of appearance, this cake tasted delicious. It was gloriously strawberry-flavored, moist, and surprisingly light. Seriously, this cake is amazing and delicious. There wasn't a single unfinished cake slice on the table.
However, I wish it hadn't turned brown in baking. It didn't affect the flavor at all, but I would love to know why that happened. If you want it to look more like it has a whole pint of blenderized strawberries in it, you might add a semi-generous amount of red food coloring to the batter. You would probably get what looks like a lighter-colored version of red velvet cake. 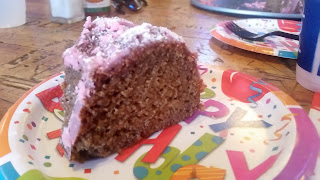