'Tis Christmas time again! It's the time for an increase of ladder injuries, light displays that horribly abuse extension cords, and of course the end of the semester at cooking school! Which means we bring an end to an entire sixteen weeks of cake-decorating class, and therefore we consider ourselves well-qualified to make the finest of cakes for the most of festive occasions! After all, we can now do one of... these! 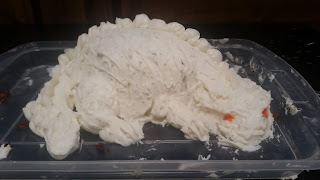 Actually, you can't properly behold the cake in such flat lighting. Let's show this cake in a way that allows you to truly feast your eyes on the artistry! 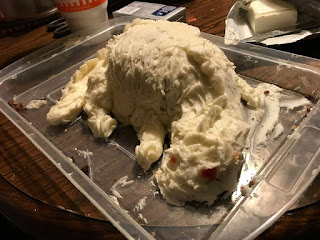 All right, that's merely the practice cake. Like last time, we thought that this cake was important enough to rehearse the night before as if our grade depended on it. We made careful notes ("be sure to cut scales into icing before making legs," "save icing for spine ridges," etc). We also made a list of every tool and icing tip we would need to do this again in class, and carefully packed everything so we would be absolutely ready for The Big Test Day. Then we left all our stuff at home.
I'm going to let the cake say how we felt when we got to class and realized that our carefully-packed supplies were still waiting at the house for us to put them in the car. 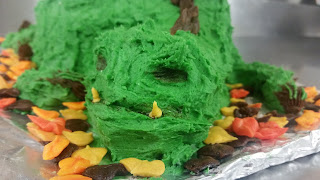 In an act of mercy, the teacher lent us her cake-decking supplies. And so,we spent the day making... this! 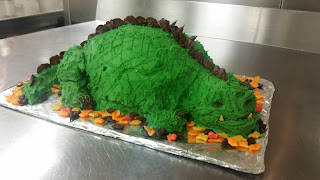 Isn't he cute? The girl who was making her cake next to me named him Froedrick. 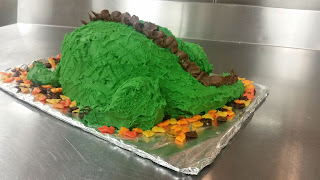 As you can see, we deliberately avoided even trying to smoothly ice a cake. Instead, we hid our icing ineptitude with "the naturalistic look."
Usually, the school keeps the cakes you make, selling them for fundraising. But we got to take Froedrick home with us! Unfortunately, we didn't think he tasted very good. Remember how last time we turned our midterm cakes into cake balls? Well, we decided to get together with friends and do that again. Unfortunately, the realities of adulthood being what they are, a full week elapsed before we could all gather.


Let's pause and look at the cake board right after we dumped the cake off of it and into the bowl. I love the intact autumn leaves. 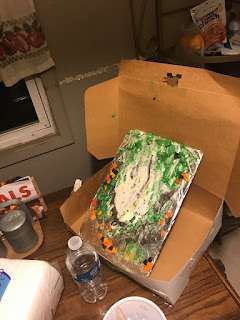 As we noted last time, the decorating icing we use in class is basically a paste of powdered sugar and shortening. It tastes like the filling from some very sketchy knockoff Oreos from the clearance shelf of the dollar store. You have to admit, it's impressive that an icing recipe can make the usually-magical combination of fat and sugar taste bad.
However, we have to admit that the icing did an amazing job of keeping this week-old cake from going stale. Sure, the icing on the outside had gotten a little crusty, but the cake tasted like we had baked it that morning. 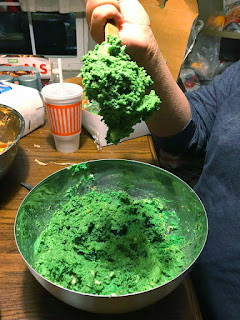 And let us add that the icing was the only thing keeping this  cake from going crumbly and sad. We didn't freeze the cake, or even wrap it very well. Only the icing kept it so well protected from the staleness-inducing forces of the outside world. Unfortunately, it tasted bland, so despite its extraordinary state of preservation we smashed it anyway.
Now, the practice cake was made from brownie mix (even at home, I didn't want to use eggs and fresh butter if I was going to entomb the resulting cake in sweetened Crisco). We briefly thought that the brownies might taste good if you scraped the icing off, but brownie mixes apparently use barely enough chocolate to turn the batter brown. These tastes bland and sad. So we smashed them too. 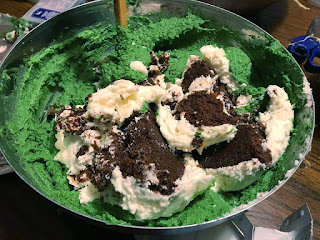 Now, the last time we turned these into cake balls, we had only enough icing in the cake to actually coat it. But entire sections of this dragon are made entirely of icing. So unlike last time, we didn't have ideal cake-ball filling so much as particles of cake suspended in icing glop. On the bright side, adding the brownie cake changed the green from the color of cheap St Patrick's Day party favors to the color of guacamole. Here it is before... 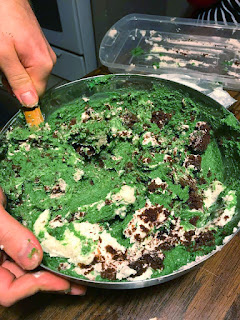 Whie we did originally intend to turn this paste into cake balls, this was a lot of smashed cake. No one wanted to spend an inordinate length of time rolling this into walnut-sized balls, nor did we want to clear out enough freezer space. So we did this instead. 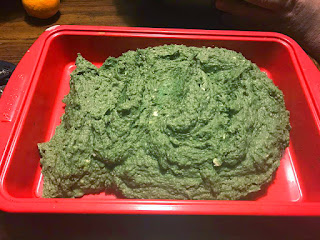 Once you spread it out, it looks like you're staring at the surface of someone's seven-layer dip, doesn't it? 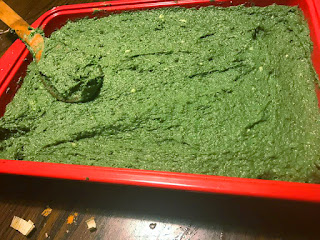 Well, anyone want to hire me to do their wedding cake? Satisfaction not guaranteed, memorable results promised!