Guess what was in the clearance bin again! 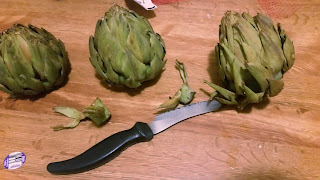 Indeed, they once again had artichokes at 50¢ each! We wanted to try to roast them without burning them like we did last time, but these were already looking dried and leathery. Unlike the last artichokes, you could tell why these were in the clearance bin. We decided that the only way to possibly cook these was in boiling water. Otherwise it'd be like eating rawhide. Though honestly, we didn't even know if this would work. While we have successfully cooked nearly-dead vegetables oftentimes before (usually by pulverizing them and putting them in meatloaf), our methods for sad and droopy vegetables generally involve reducing them to unrecognizable tiny bits that hopefully still contain vitamins.

This was a great way to eliminate some other waste. You know those skinny little garlic cloves at the center of the bulb that are too small to bother peeling? We keep swearing we'll use them in something, but kept putting off the bother of having to peel like twenty garlic slivers to get a scant teaspoon's worth of garlic. So they've been stacking up. 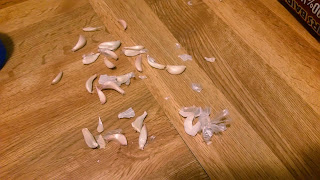 In theory, by the time the artichokes had done cooking, the garlic essence would have suffused the water without even bothering to peel each of the little things. 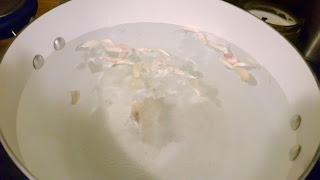 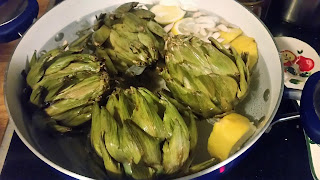 As aforesaid, we didn't know if this would work of if we were boiling water for nothing. These things were pretty dead looking. However, after over an hour in the pot (well over twice the usual boiling time), you'd have never known they were so dried-up when I brought them home. 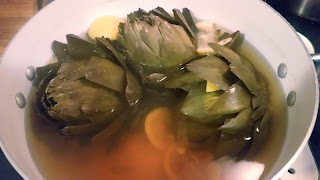 As you can see, the leaves reconstituted in the water. These suckers look like they were fresh when I bought them! I would say that no one would ever learn the truth, but knowing myself I wouldn't even be finished putting the plate on the table before saying "And these were two for a dollar because they were practically dead! I tell ya, they're practically giving them away!" 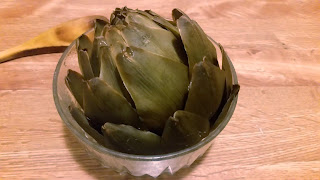 I don't know if this is a result of drying the artichokes and then boiling the heck out of them or if this happens with fresh ones too,  but if you wanted to you could just pull the center core of leaves right out. 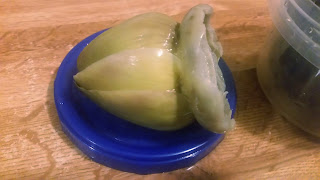 The core came out very neatly with the slightest pull. Do all artichokes do this and I never noticed, or is this a giveaway sign that I cooked long-expired ones?
I'd try this every time someone served artichokes were it not considered rude to perform botanical observations on someone's mom's cooking.

Speaking of botany, we finally got a plant we've wanted for a year now- a pink poinsettia! 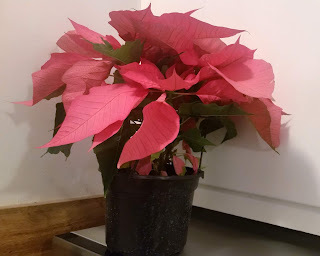 We meant to get one last Christmas, but made the mistake of saying "We'll wait until the 26th and nab one on sale at the grocery." It turns out that the decorations and candy migrate to the clearance shelves, but the plants get snatched away in the night. So when we went to the store on the 26th to get a discounted pink poinsettia, they were all gone! And unlike other houseplants, no one sells them any other time of the year, so we got this one before Christmas before all the poinsettias went away. Where do they all go? Do the nurseries take them back and keep them alive to resell next year?  Do all those unsold plants end up in the trash (followed in a few weeks by most of the poinsettias people bring home)?
Anyway, we have a red one we got a few years ago, which promptly dropped all its leaves and looked completely dead right after Christmas. We kept meaning to throw it out but procrastinating, until one day we noticed it had new buds on its bare stalks. Now it spends most of its time looking like this.

Granted, it almost never blooms (it tried to last year), but we wanted a pink one anyway. Now we can have two poinsettias that never bloom. But at while not blooming, one of them will be pink!