Dead Bread! or A Book of Cookrye cooks along to someone else's recipes

Christmas is definitely impending, which makes us at A Book of Cookrye think of dying. Which brings us to making corpse chow! Or at least, pan de muerto (literally translated "bread of the dead"), traditional to Mexico's Day of the Dead.


Actually, we made this by request for Thanksgiving at a friend's house (well, a friend's brother's girlfriend's family's house- I'm not sure how that happened either).  But as Christmas rolls mercilessly on, we at A Book of Cookrye would love to keep the spirit of autumn in our hearts and recipes.

I have vague memories of Our Mom of Cookrye attempting to make this early in our childhood, and furthermore of it not coming out very well. Let me immediately add that Our Mom of Cookrye is a very good cook, and that it's hard to make any yeast bread from scratch when you're also trying to keep multiple children under the age of 10 from breaking the house while you're kneading. So we're not using one isolated instance of recipe disappointment to claim that Our Mom of Cookrye couldn't bake. Quite to the opposite, this distant and foggy memory of a recipe defeating Our Mom of Cookrye of all people made us hesitant to try it ourselves.

We had another two closely related reasons to suspect that today's culinary perpetration would end badly. First, we're making it for strangers.Second, we're just picking a recipe off of someone else's blog and making it for the first time. As nearly everyone knows, making recipes you've never done before, for people you've never cooked for, automatically invites failure. If you make a test batch of a recipe in the privacy of your own home, it will almost always turn out perfect. But if you make a recipe for other people without privately testing it first, even though it's the exact same recipe that would have been exquisite had you tried it out beforehand, it will come out utterly terrible.
Even if it's a recipe you know and really love, cooking for others is always risky.  For example, we once decided to make these rolls for a friend when we were out visiting. The recipe has unfailingly turned out absolutely perfect every time we make it at home (see below), and is now one of our most-often bread choices.

But, because we had people watching (indeed, we were in someone else's house), the dough wads refused to even slightly expand. After not rising at all, they baked into sad rocks. You may think that we used dead yeast, but we bought it that morning and put it in a glass of warm water to make sure it generated foam before adding it.


To counter our misgivings, we made many attempts to reassure ourselves. It's bread, we told ourselves. We've done bread before! In fact, it looks like only the heavy amount of orange zest in the dough makes this recipe different from dinner rolls like this or this.  Surely this recipe would present no problem whatsoever. 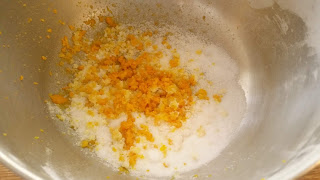 Incidentally, this recipe really uses a lot of orange zest. We at A Book of Cookrye have often used the trick we read a while ago of rubbing orange/lemon/whatever zest into the sugar to release the oils and get a much stronger flavor out of it. This recipe uses so much zest that it turned the sugar into an orange-flavored paste. Which, by the way, tasted amazing. 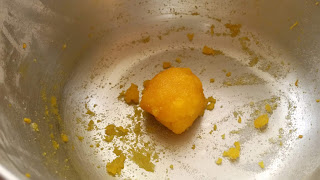 Really, grating the orange zest was the only tedious part of this recipe. It took us like fifteen minutes with a grater before we had enough. From here forward, the recipe looked like most yeast bread recipes- with one teeny exception... 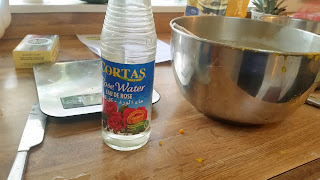 All right, I know the recipe calls for orange flower water, but we at A Book of Cookrye already had rose water which we've been dumping into tea and odd recipes for a while now. Besides, the dough has so much orange in it it looks like we added in one big egg yolk. It doesn't need any more orange. Making it taste like oranges and roses would add intoxicating variety to the flavor.... in theory.

Bashing the stuff in the bowl together yielded a substance that looked like it had a lot of artificial coloring. 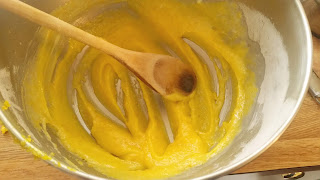 Upon getting all the four into the dough, it seemed pathetically dry and crumbly. Was there an ingredient we forgot? I mean, I've seen some bread recipes say the dough's supposed to be dry, but this clearly was going to bake into bricks instead of bread. 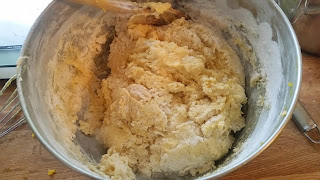 We looked over the counter, seeing if there might be something else meant to go into this bowl, and espied... this! 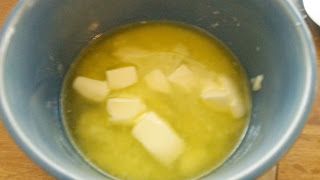 Yep, if you left out the yeast and the orange zest (that had taken so friggen long to grate), we had basically made a big bowl of the same flour-paste that preschool teachers use as a modeling clay. Would this bowl of semi-melted, soupy butter  change turn it from homemade Play-Doh to bread? 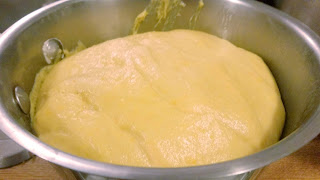 Butter may not solve all of one's problems in life, but it certainly fixed this bread! Now, here we must note that there was a massive delay before we could actually bake it. Various people needed the kitchen for such trivial purposes as "making dinner" and "doing something about the awful mess." At any rate, the dough spent a long time on the counter before we finally baked it. At this point we were so friggen tired that we were not about to carefully shape this into the traditional bones and such.

The dough smelled heavenly, like this mixture of oranges, roses, and homemade bread. If you tasted it, it seemed like it could become the cinnamon rolls of your most diabetic dreams. With bread this delicious, surely we could do better than just plopping squares on a pan. 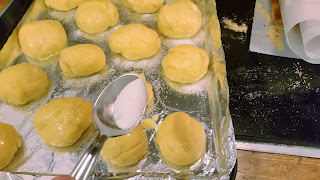 Indeed, we made a semi-successful attempt at rolling the dough pieces into nice little spheres. We even brushed them with egg and sprinkled sugar on top just to make them extra nice. After all, this dough smelled and tasted so good, and we hadn't even put it in the oven yet.
Incidentally, for those who have difficulty evenly sprinkling sugar (or herbs or what have you) over rolls like this, we have a suggestion. Tip the spoon slightly sideways and wave it over the bread while gently tapping the forearm holding it. It added a lovely, clump-free dusting of sparkly sugar to each one.
Now, we did brush these things with egg to both make a lovely glazed top and also give the sugar something to stick to. Which meant we had a substantial quantity of unused egg still in its tiny little bowl. 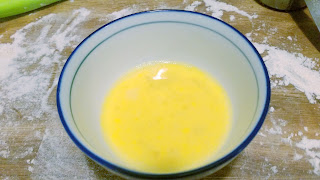 Anyone familiar with the Book of Cookrye grocery budget will know how we feel about wasting nearly a whole egg.


But that's all right, because once we set the rolls away to rise, we got out the soy sauce and a frying pan!

Here we at A Book of Cookrye must give a warning to those who do a lot of baking in one night. You see, your kitchen will be so full of smells that your nose may not be able to tell you to see what's going on in the oven. You will eventually remember  that you had your last recipe of the night baking, peer into the oven, and see that it's too late to save your friggen bread from overbaking. 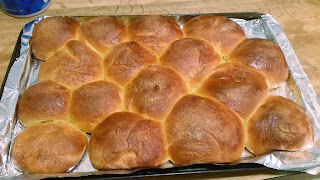 We tried to tell ourselves that they were just a bit well-colored on the outside, but unfortunately we tasted one.

In our fatal optimism, we brought them to our friend's Thanskgiving gathering anyway. He was super excited that I'd actually made a recipe request. Then he bit into one. He then thought for a moment, trying to determine how to be tactful. His exact words were "Is it OK if I put the rest of this in the trash?"
Fortunately, there was so much other food that I simply stashed the rolls in a dark corner of the kitchen (the trash can was too stuffed to accommodate a gallon bag of oversize bread rocks). However, I did see some people finding the bread hiding in its little corner of shame. They too discreetly didn't finish a single one. Fortunately, no one knew I made them.
Hope everyone else had a lovely Thanksgiving!
Posted by S. S. at 1:31 AM