Happy belated Thanksgiving from A Book of Cookrye!

Happy Thanksgiving Weekend from A Book of Cookrye! Indeed, it's once again time for us to make pies!

It's also that time of year when people who never cook try to do so because family's coming over! We at A Book of Cookrye have gotten used to seeing the baking aisle relatively unpillaged. But when we went in the night before Thanksgiving, the aisle still showed evidence of being ransacked earlier that day. Even the spices, which seem to spend weeks if not months waiting on the shelves, were thoroughly trashed.

A favorite Book of Cookrye pasttime during the holidays is watching people who stare dumbfounded at the baking ingredients, amazed that stores have them. Imagine the reaction you would have if you went into a car parts store and found a whole section of buggy whips. We once witnessed a woman gawk at the flour, call someone on the spot, and say "They still sell this stuff!" Although the big rush was long over by the time we arrived after midnight, the cashier said that the baking aisle alone had been stuffed with at least twenty people at once.
This meant that we at A Book of Cookrye had to do the unthinkable: buy things that were not store-brand! 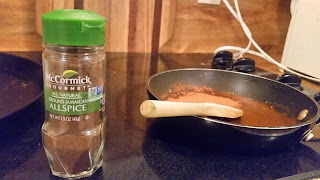 See that darker splot of powder? That is a very expensive powder splot, dagnabbit. Admire it. Bask in the full-priced, name-brand glory because the store didn't even have it discounted. 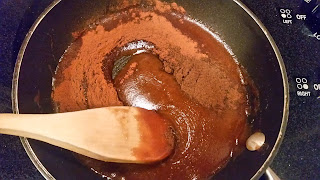 Also, I've found that a generous helping of allspice does wonders for an apple pie.
Now, we at A Book of Cookrye formerly used Gala apples for pies. They used to be just tart enough to have a kick, with a lovely, deep flavor that seemed to only improve in baking. Indeed, they made such delicious pies that when we saw complete strangers at the supermarket who did not know what apples to use, we would tell them that they simply had to use Galas for their pies and cobblers.
But lately, Galas have been getting prettier and blander. I think they're undergoing the same breeding-only-for-looks problem that made the Red Delicious taste like sweetened foam. Fortunately, the hoity-toity store near our house has, for whatever reason, insanely cheap produce and a lot of apple varieties. I think the produce might be a loss leader to entice customers into pay $20 for a bag of multigrain chips. This year's pie had half McIntosh and half Pink Ladies. We first had McIntosh apples when we managed to cross an international border for the first time in many years.

However, we've never seen them shipped all the way down to the American south before. Did you know that when you cut them open, the inside is about as white as a cotton ball? Here's a mix of Pink Lady and McIntosh pieces so you can see for yourself. 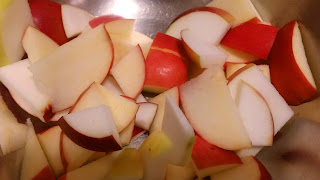 These days we really like Pink Lady apples in pies, with a sweeter one mixed in to add some different flavors. This may change if apple breeders make the same mistake they did with Red Delicious and Gala, breeding them to look prettier without stopping to bite into one and see if it still tastes good.But let's move on to the pie crust! After trying to keep various mixtures neatly contained in bowls, we find it marvelously freeing to just throw flour all over the bare countertop and use the open space. Even if in this case, the countertop was already covered by a dreadful cooking mess, which forced us to instead use the stovetop.


Incidentally, you can use the extra pie crust scraps to make a crumb topping. Just add extra butter, sugar to taste, enough flour to make it crumbly, and spices to taste. The butter's really important. Without it, your crust scraps will turn rubbery as you try to force the extra things into them. But if you add enough butter, the pieces will get soft and crumbly again.

Now, we at A Book of Cookrye faced a mild conundrum. You see, we had accidentally bought and cut up too many apples (we didn't want to be caught short and have to brave the grocery store again). Then we accidentally overestimated how much extra crust we'd need to make the crumb topping for the apple pie. In fact, even after making the crumb top, we had enough pie crust scraps to reroll and put in a small cake pan.

Incidentally, as you get your apples into the pie pan, you should know that if you don't eat at least some of this delicious sugary apple-spice sludge off the bowl, you either have a lot of willpower or no soul. 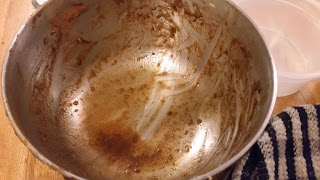 But anyway, back to the pies. We had made too much of everything- crust, apples, crumb top- to fit in one pan. But since all the components were ready and at hand, it took only a few minutes to throw the extra things together and produce a second pie. And so, we at A Book of Cookrye happily present: Apple pie and spare pie! 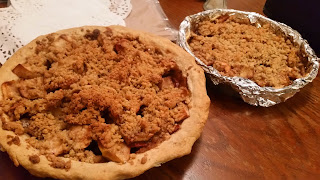