Recently(ish), we at A Book of Cookrye went to an estate sale. We should not have because we've amassed a lot of things we don't need and therefore had no business going out to buy anything. And so, the only thing we purchased an adorable 1920's novel called The Light Princess (it's a cute story about a princess who is cursed by a spiteful aunt to be weightless, causing the whole court to have to tie her down).
However, we quickly gravitated to the kitchen. The cabinets were opened so people could rummage through the plates, and we saw a small flock of recipes taped inside of them. Because (unlike the others which were newspaper or magazine clippings) this one looked totally anonymous, we slipped it into Our Pocket of Cookrye before it went into the trash can after the sale closed up. 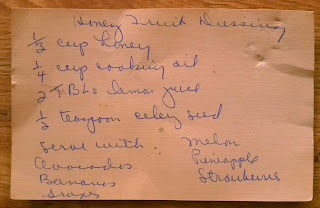 The only we can date this card is by what's on the back, which is... 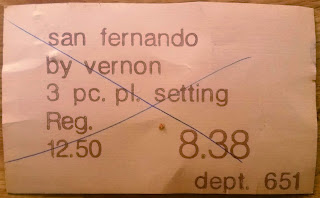 An image search for "San Fernando by Vernon" turned up one of those brown plate patterns that seems expressly manufactured for selling secondhand. It's hard to imagine this being sold new- this pattern doesn't seem like it was produced in a factory so much as it spontaneously appeared in the unsorted plate stacks in a thrift store somewhere.

Setting aside dinnerware, we looked for the recipe online to see if anyone else has it with a date. (This is what happens when you are a former library assistant. You look things up.) While various fruit dressings with honey and celery seed turned up, none of them were like this one- even if you allow for the odd variation in ingredient amounts.
But that's enough research. Let's get to making this! The recipe skips straight from the ingredient list to the serving instructions. But, there doesn't seem to be a lot of guesswork needed to figure out how to make it.

I'm not sure what the cooking oil is supposed to do for this. Thin the honey out a bit (in which case wouldn't water work)? Or maybe cut the flavor down in case it completely obliterates the taste of whatever fruit you put it on?
Incidentally, that is the same bottle of lemon juice from when we did the pumpkin chips last year (which we are still trying to give away).
Anyway, the ingredients floated on top of each other in very pretty-looking layers, but absolutely refused to mix. I thought I might use a small bowl since this is a small batch of dressing, but ended up moving them into a bigger one (which by the way doubled the number of bowls I had to wash for this recipe)  so I could really bash them about until they learned to like each other. 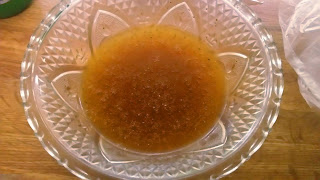 See the oil globules stubbornly refusing to mix in? For such a tiny little bowl of small amounts, you had to beat it really hard with a whisk before you could get anywhere with it. I was starting to think it wasn't supposed to permanently mix- like those bottles of salad dressing you have to shake every time you pour. But after a thorough whisk-bashing, we had what looked like a bowl of slightly thinned honey with specks floating in it.

And so, after spending literally a minute making this, how does it taste?

Well, it does a lovely job of hiding the fact that the strawberries are slightly dried-out and wrinkly. The celery seed flavor was barely noticeable. I mean, it was kind of there, but you could have used poppy seeds and barely noticed the difference. It mostly tasted like very tart honey lemonade- which is of course delicious. However, if you're going to toss a fruit salad in this, you should know that the honey will draw out the juices from the fruits if you do it too far ahead of time. 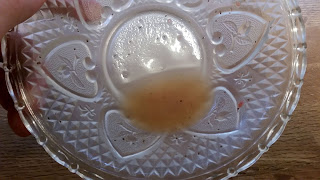 You should also know that the resulting puddle of fruit juice and honey is absolutely delicious.
The unused honey dressing went into the refrigerator. Even after three days, it did not separate. The honey and oil may have refused to mix at first, but once combined they would not leave each other. Also, the celery seed exuded a lot of its flavor into the dressing. You'd have thought it had a lot of celery juice in it. I thought it was an interesting flavor contrast, especially with apples.

This is a lovely and very easy fruit dip or dressing for fruit salads. If you eat it right after you make it, you can't taste the celery unless you bite into a seed. If you let it wait in the refrigerator for a few days, it practically tastes like you used equal parts lemon and celery juice. I think the latter makes a lovely flavor contrast with sweet fruit, but you should definitely try both.
Posted by S. S. at 6:58 PM