Roasted Artichokes: or, Smoking out the kitchen

We at A Book of Cookrye always stop by the discount produce bin whenever we get groceries. Sometimes we take home apples and bananas. Other times we find squishy squashes and end up findng recipes that cook them really thoroughly to kill off any microscopic friends. After all, even if they have invasive organisms on them, they're still full of vitamins- and also 25¢ a pound. Guess what turned up today! 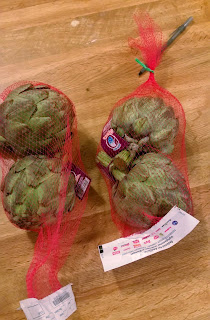 Artichokes may usually be expensive, but these were $1 a bag, which means 50¢ each. Which means we can try something weird with them and not feel bad about the expense if it's an utter failure!

Every recipe in this book has been absolutely delicious. You may remember that when our copy finally gave out (it was a cheap 60-year-old paperback, so it was bound to give out), we scanned all the pages, printed them, and bound them into a new copy. The book is that good.


You should know that this recipe gets special mention in the cookbook introduction. Before we get to the recipes, there is a long chapter called "Wines Customs and Festivals" which is full of the author's extremely idyllic reminisces about her family's village in Sicily. She makes it sound so lovely that you wonder why they ever left for America (and you also want to see if any of her relatives still live there and would let you come for dinner). Each major holiday gets its own description. She names roasted artichokes as one of the special dishes served on New Year's Day. Incidentally, if you would like to swoon for somewhere you'll never get to live, her family's village (which, before you think I'm research-obsessed, she gives the name on the first page of the introduction), has a Wikipedia page with photographs.
All right, let's get down to artichokes! I ate my first one when visited an Italian friend at his parents' house. They were really excited to serve them, as if this was a special treat instead of something they cook every other night. My friend had even said about a week before "Actually, you should come over Saturday instead of Friday. Mom's making artichokes." Let me emphasize that the visit was rescheduled around artichokes. And so, on the appointed day, his mother brought forth on individual plates and with especial flourish, these dull-green spike balls that looked impossible to eat. Despite having (somewhat) mastered manners in public, I could not stop myself from staring dumbfounded at this apparently inedible object that had been brought to table.
His mother got this odd look of pity on her face when she realized. "You've never had an artichoke?" To help you get a good mental picture of her reaction, imagine having a guest over and finding out they have never used a spoon and don't even know how to hold one.
Anyway, let's get to the roasting!
Before cooking these things, the recipe has us putting in parsley and garlic. Now, we at A Book of Cookrye know practically nothing about Italian cooking, but apparently they're really big on fresh ingredients and the like. With this in mind (and not at all because we didn't want to pay for a bundle of parsley that we'd never use up), we decided to go super-fresh and cut some pieces off the surviving remains of our attempt at an herb garden. The oregano and the rosemary had survived the combined assault of terrible weather, starving squirrels, and a surprisingly vicious succession of fungus and molds that turned most of the plants into compost. 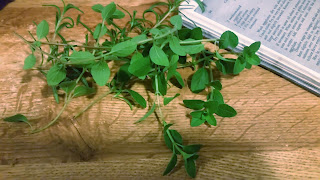 It turns out that fresh herbs shrink and pack down a lot when you chop them up. To get three tablespoons' worth, we had to go back outside with scissors to cut off even more pieces of plant. But to make things easier, it had rained outside so the herbs were already rinsed. 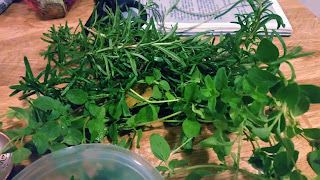 And of course, this is A Book of Cookrye, where garlic is always to be used more expressively than recipes originally direct. For reference, the original recipe calls for two garlic cloves. 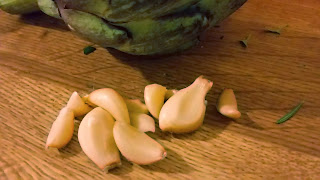 Moving back to the green things, the small houseplant's worth of herb stems yielded this tiny little bowl of minced herbs. They smelled astonishingly pungent. No exaggeration, the whole kitchen smelled like oregano and rosemary. 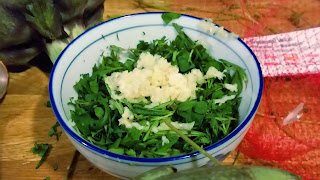 Once were ready to stuff the artichokes, we discovered a lovely surprise. You know how artichoke leaves have little spines on their tips? We had figured we'd just snip them off before stuffing the leaves rather than get our fingers pricked a lot. But it turns out that the artichoke growers had already cut them off before they even reached the supermarket! Do you know how often it is to find pre-cut produce this cheap?

Anyway, what had initially looked like a huge bowl of chopped green things suddenly looked tiny when we realized we had to divide it among every single leaf of four artichokes. 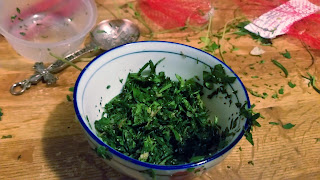 I thought these were supposed to be stuffed artichokes. Right after the recipe tells you to stuff the herbs into the artichokes, it says "Then close leaves." Which implies that the artichokes should be absolutely bulging with herbs, right? That's why the recipe says you have to push them shut, right? Well, each leaf got merely a tiny pinch.
You should know that slipping all those herbs into the artichokes was extremely tedious. How tedious, you ask? So much so that before we were halfway through with the job, we were giggling to ourselves at how funny it would be to start an artichoke farm for the express purpose of calling it Okie Dokie Artichokies. It was ever-so-slightly infuriating to do all that work and then see no visible sign that we had done anything. 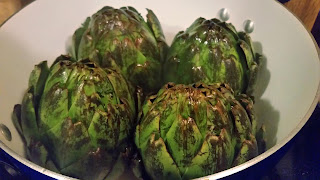 And now we get to the part that really tests the fan over your stove. The recipe has us put this pot of artichokes over high heat and leave them for a very long time. There will be a lot of smoke. If you have a smoke detector in the kitchen, do yourself a favor and tape over it.
You know how we previously ranted that the vent hood over the stove was one of those stupid recirculating ones that just blows the smoke and bad smells back into the kitchen? Well, it turns out that there is a duct running to it, presumably from a different set of appliances now lost to a previous owner's half-assed renovation. We decided to replace the recirculator with a vent that would actually blow the fumes up the duct. When we dismantled the hood, we found that it is a convertible model meant for either recirculating or for going up a duct. Much swearing at the ineptitude of the stupid people who failed at hastily updating the kitchen before selling the house ensued. But happily, we can now turn on the vent over the stove, and it will take the steam, smoke, and bad smells right out of the house. And boy does this recipe test the hood fan. Someone walking past the house might have thought the hood duct was connected not to a stove vent but to a merrily burning fireplace.
You should also know that aside from the smoke, this recipe is going to be very spattery and loud. If you were spending the recipe up to this point flirting outrageously with someone by telephone (just to give an example), you may have to surrender to the noise and hang up.And when I say spattery, I don't just mean little drops here and there. The hood over the stove was literally dripping before we got halfway through the cooking time.
Now, the recipe says "Watch carefully to prevent burning," but that instruction is no help at all. What does one do if one suspects burning artichokes? Turn them over? Also, with the artichokes so tightly crammed into the pot, how the heck can we see under them to tell if they're burning?
The noise only got worse when we added the water.

The recipe had said to "Cook over high flame," but in hindsight I would say that phrase does not mean to literally turn the stove burner as high as it can go like you're boiling a vat of spaghetti. As the steam cleared, the smells emanating into the kitchen (combined with the water's transformation into black sludge) suggested all that was not right in the pot. 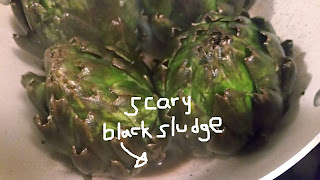 At this point we could have thrown out what smelled like burnt artichokes and regret having carelessly wasted a $2 windfall, but we decided to proceed and hope for the best. After all, the only remaining step was to clap a lid on the pot and wait- so even if this was a failure, it required no further effort.

At this point, the recipe does what we did on our second-ever post we ever wrote. We're cooking the vegetables by putting a tiny little puddle of water iunder the vegetables and letting the steam rise up and cook everything in the tightly covered pot. So I guess that means our steamed vegetables get an Italian seal of approval? Well, probably not but it is nice to see some sort of support in cookbooks for our culinary daftness. Anyway, let's have a look at what we had done to the artichokes by the end of the recipe! 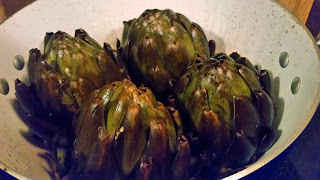 As aforementioned, the introduction lovingly rhapsodizes about the foods and customs of various Italian holidays. In the little section about the New Year's Day, she practically sings about the roast whole pig served with "crackling-brown carciofi arrostiti."Are our artichokes crackling-brown like they apparently should be? 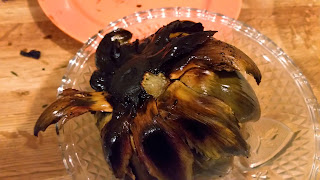 Well, we at A Book of Cookrye haven't burnt several brunches' worth of toast without learning how to scrape off your charred failures with a steak knife. 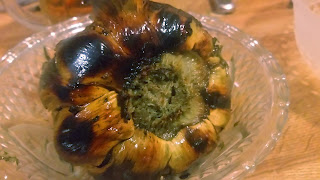 I think this is a lot closer to what the artichokes should have looked like if we'd gotten the recipe right. Sort golden, really toasty, and crispy on the bottom. Imagine if the artichoke heart had that golden-crunchy layer on the bottom instead of the pure-black cinder. 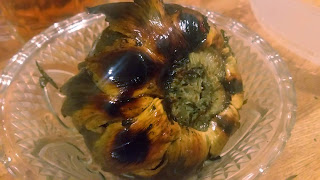 Once you prop the artichoke upright, it looks surprisingly normal. You'd never guess that we attempted a daring new technique on it (if you can call a recipe from a 1948 cookbook new). 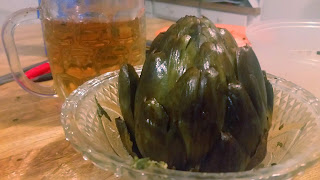 As for the taste: fricken amazing! Even though we only put a tiny smidgen of herbs in each leaf, the flavor suffused the artichokes thoroughly. Even the heart had a nice rosemary-oregano-garlic flavor that had seeped its way into it. And the way the leaves were toasted (well, the leaves that remained after we threw away the burnt ones) added a really nice flavor.
However, at the beginning of the recipe when you have only artichokes and hot oil in the pot, you start to smell them burning, add the water and turn down the stove immediately. I don't think the recipe should leave your pot looking like this. 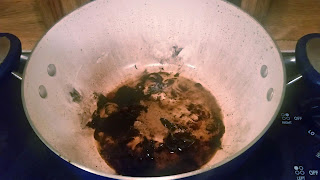 In full disclosure, I should note that this recipe left the pot with apparently-permanent stains that defied scouring. But that's probably a natural result of turning your food into charcoal.