Is puff paste really that hard?

Guess what we at A Book of Cookrye are attempting! Here's a hint: The recipe has three ingredients, but the directions run for two pages.

If you've been reading this blog for a while, you've gotten to witness my progression of pie crust skill- from this:

In fact, after we'd gotten about as skilled as the last picture, we once semi-accidentally made puff paste with cheese, which (once cut into squares) made lovely biscuits. 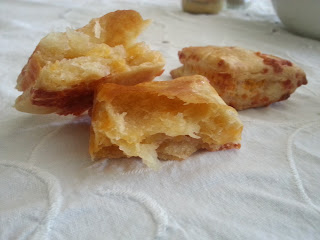 And so, we decided to look at one of the longest recipes in the entire book. One that has scared us for a long time. After all, when you can barely roll out a pie crust once without ripping it to shreds, why would you be so stupid as to try to keep folding it--- and then rolling it again?
As we so often do when trying intimidating recipes, we decided to follow absolutely all of the instructions- even the ones that we usually skip in the name of laziness. Things were happening in the Kitchen of Cookrye that never happen.

Following every minute instruction means that whatever happens, we are clear of blame. No one can say something like "Your cupcakes turned into hockey pucks because you forgot to spin the bowl thrice widdershins like the recipe says!" If this fails, we can blame Miss Leslie for faulty recipe-writing, not ourselves for skipping half of the steps. Speaking of steps, let's get to the part of this recipe where all the butter makes the kitchen start looking like Thanksgiving!

In addition to using a sifter, we got out... this thing! I'm kind of surprised we still have it. When I was a wee tot learning how to cook, I asked Our Mom of Cookrye if we still had it in a drawer. The trouble was I didn't know what it was called. Our Mom of Cookrye didn't know either, which made an interesting experience out of finding what long-abandoned corner of the kitchen it had gotten to.

All right, so far this looks like we're making regular pie crust, doesn't it? 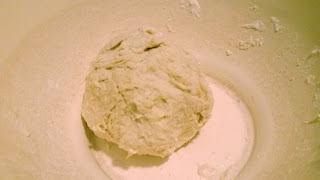 Now, this is the point where it starts to look less like pie crust and more like puff paste. Miss Leslie thinks we should have a marble slab for this purpose. As it happens, we actually have one! Sort of.

This prompts the question: Was marble cheaper in 1837? Granted, Miss Leslie was from Philadelphia which is near(ish) to a lot of quarries, so maybe marble was cheap where she lived. But how many families embarking on the long journey west carried marble slabs with them? 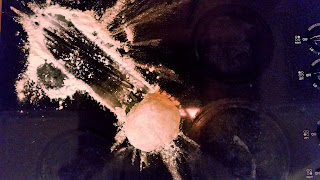 All right, so here is the last point where we're making a nice, normal, easy(ish if you know what you're doing) pie crust. Note that we've cut the recipe in half and it's still enough to cover a lot of the stove if we were to roll it out as thin as it would be if we were about to bake it. While bulk production makes sense from the 19th century perspective where kitchen sinks didn't have running hot water and a little bottle of soap, where were you supposed to store the extra without a freezer? 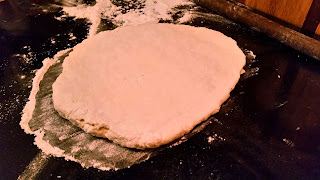 And now, we finally get to turning this into puff paste. What we're basically going to do is repeatedly encase butter in the dough. So first, we fold it over into a sort of dough-butter sandwich. 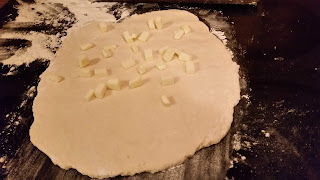 And once you've got that rolled out flat again, you keep adding more butter and folding it on itself, again and again and again. It helps to give the dough a quarter turn every time you repeat this. Otherwise, you end up rolling it into an annoyingly long rectangle. 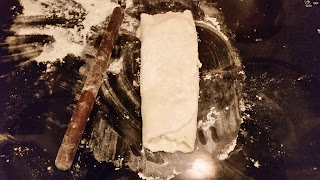 Believe it or not, re-rolling this actually got easier as we kept doing it. The dough got springy and almost rubbery. It seemed a lot more resilient against tearing every time. Like, the first few times the dough as almost like semi-delicate cookie dough, but as we reached the last few butter portions, the dough had gotten so tough we could have hung it off a coat hanger without it tearing. 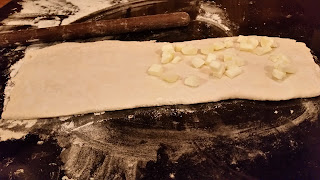 You may be surprised what a difference repeated encounters with a rolling pin made. The dough got really smooth and kind of elastic toward the end of this. It even looks different. To our own surprise, this entire process (that goes on for two pages in the book) was really fast once we started rolling all those layers of butter in. 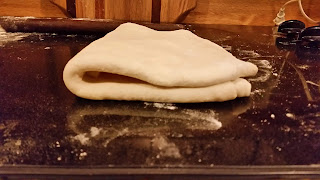 And now we've got all the little butter pieces encased in the lovely pie dough! See how you can see them kind of peeping through the translucent layers? That's a good sign. It means the butter's still in separate layers rather than just mixed into the dough. 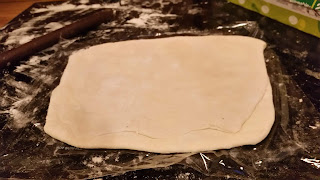 And that, dear readers, is how to make puff paste like it's 1837! Let's revisit the question we started today's perpetration with: Is puff paste really that hard? Well, if you can roll out pie dough once without cracking and tearing it, rerolling it a few more times to turn it into puff paste is easy. If on the other hand you can't, perhaps this recipe is not good for your sanity.
You may be wondering what you might do with this now that you've got it made. Now, you can make a lot of super-fancy dessert things easily (the hard part was making the damn puff paste). But our favorite (at the moment) is... these! 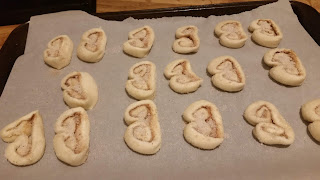 As the recipe promised, the puff paste did indeed expand in the ovn, giving us these lovely cookies. 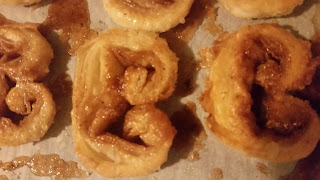 Let's snap one open and BEHOLD THE FLAKINESS! 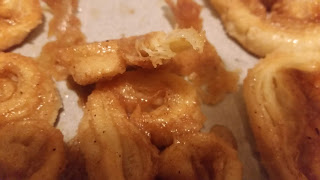 Assuming you can make the puff paste (or just buy it frozen), these buttery sugar-bombs are surprisingly easy to make. That post is forthcoming!
Posted by S. S. at 1:12 AM