Palmiers, Elephant ears, Orejas, Whatever you call them: A Tutorial of Cookrye

Today, we at A Book of Cookrye are going to deliver on what we assured you was forthcoming when we made puff paste. Yknow those cookies we made at the very bottom of that post? 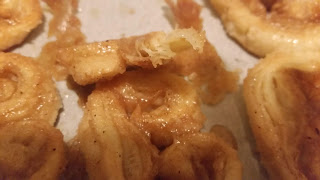 Well today we're making them ourselves! We've cranked these suckers out a lot in baking classes because they're both easy and insanely good.  They're magical, dainty, flaky, butter-sugar bombs.
To really emphasize how easy they are: our teacher never even handed out a recipe. She just showed us how to make them and that was it. Imagine if you were making cinnamon rolls-- but you already had the dough made and the cinnamon-sugar at hand. So all you have to do is roll them up and bake them.


As you can see, there's really only two things you need here: puff paste and sugar. You may not want to make own puff paste, or you may find attempting it intimidating. If so, we are pleased to report that the frozen puff paste at the grocery store is quite lovely. Frozen pie crusts always seem to have a cheap chemical undertone to them, but frozen puff paste seems to be just fine. So if you don't feel like getting to know your rolling pin, you don't have to.

For those of you who do wish to make your own, you should know that no matter how long I let it defrost, the puff paste would not unfold without basically tearing itself apart at the crease. 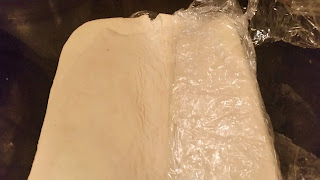 Those of you who seek to avoid this problem can freeze it without rolling it out so thin, and take a rolling pin to it to get it into a sheet when you actually use it rather than when you stash it in the freezer. As for us at A Book of Cookrye, we just cut it in half since it seemed like it'd fall apart anyway. 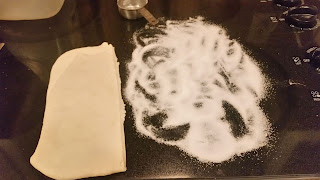 As you can see, we are about to roll this paste out just a bit thinner. But! This is what makes these so delicious! You know how usually when you roll out pie crust, you scatter flour all over your countertop? Well, today we are preventing the dough from sticking-- not with flour, but with sugar! Even if your puff paste doesn't stick at all, you should definitely scatter a lot of sugar both under and over it so it so that the dough gets nice and coated. 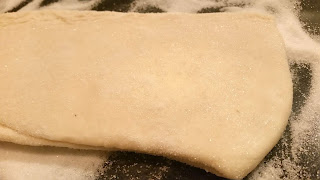 If you're making these, just accept that they will definitely make the Diabetes Fairy get out her book and put another mark next to your name. As we learned in class, you cannot use enough sugar in these. It simply is not possible. Now, let's detour for an optional ingredient: 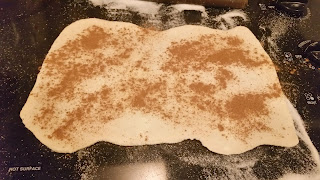 Since (aside from the fact that we're using puff paste) you make these near-exactly the way you do cinnamon rolls, it makes perfect sense that one might want to add some cinnamon (or in this case, because it's always autumn if you truly believe, pumpkin spice).
All right, back to sugar. In case there isn't enough sugar embedded in the dough already, we're just going to throw more on. 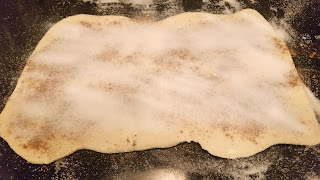 You may think that the previous spice coverage was spotty and woefully uneven. But you can just sort of smear the sugar and spice around with your hands. You could also mix them together beforehand, but that would mean another bowl to wash. 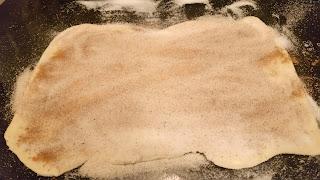 Now, if you want to make these even simpler, you can just roll the dough up like cinnamon rolls. It won't have the sacred-to-those-who-care-about-such-things Traditional Shape, but honestly that doesn't matter. If you do want to make these in the actual elephant-ear shape, just roll the two edges to the center. Now, we at A Book of Cookrye tend to lose sight of just where the center is as we roll the sides in, so we first swipe a quick line down the middle with a fingernail. 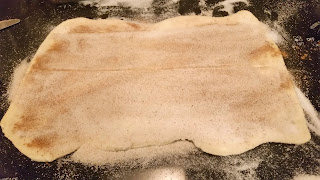 And now, we simply roll both sides in to the center. You want to do this kind of loosely, so that the innermost rings have room to expand in the oven. The sugar's going to want to fall down and out of your nice spirals as you roll, so just, um, sort of try to keep it where it lies as you go. We at A Book of Cookrye don't necessarily roll these things up so much as fold them on themselves over and over. 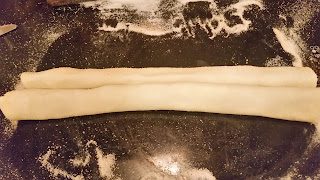 Kind of looks like a scroll, doesn't it?  Anyway, now we're going to dab a little bit of water where the two rolls touch, and then press them together. You can get out a brush if you don't mind having to wash it, but brushes are infuriatingly difficult to wash because grease and other things just hide in the bristles and will not come out. Therefore we prefer to just finger-dab it the water on.
Does the water keep the thing pressed shut? Eh, sort of. I mean, it helps a little. 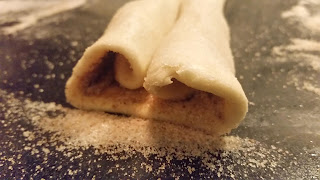 As you can see, these are relatively small cookies. You could easily start with a wider sheet of puff paste and make bigger ones. Just be sure to roll them up loosely. As has been said about certain other substances, "If you roll it too tight, it won't draw right!" 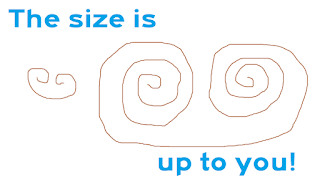 Whatever size you have desired to make, they will slice without squishing better if you freeze them for maybe 5ish minutes. Enough to firm them up but not render them rock-hard. Anyway, in class we have bench scrapers (which is basically a hand-sized rectangle of too-thick-to-bend sheet metal that comes with a grip handle) which slice them really well. However, those do not often appear in the average home.
But, do you or someone you know feel insecure about your masculinity? Did that person feel the need to buy a Manly Metal Grilling Spatula For Manly Men because the girly normal-sized spatula in the kitchen makes them feel like the Manly Men Enforcement Squad will totally snatch up their man card if they use the girly spatula already in the kitchen? Well, grilling spatulas may be so big they're a tetch awkward to wield for any practical purpose, but they make bang-up cookie slicers!

As you can see, these are more than a bit loosely rolled. That is not sloppy, that is deliberate. You see, puff paste really does puff up a lot (or at least it should).  You may think that all we do is slice and bake, but we're going to insert a third word in there: slice, squish, and bake. We'll get to that in just a moment. But while getting them to a pan, keep them upright (viz. don't turn them over to lay flat for baking) until you have set them on the pan. Elsewise all that sugar will fall right out. We further recommend that you sprinkle more sugar on top right after they're all on the pan so it falls into the empty channels. 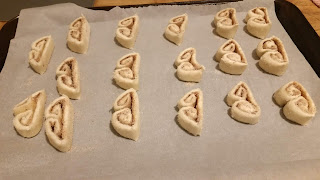 Now let's get to the second part of "slice squish and bake." It's exactly what it sounds like: Squish the cookies flatter. 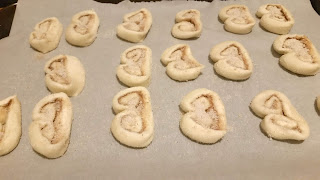 You can simply smush them with your hand. Or you can use your friend the absurdly oversized spatula. Or you can put paper/foil/plastic wrap/a cut-open gallon bag on top and then smash them en masse with another pan. 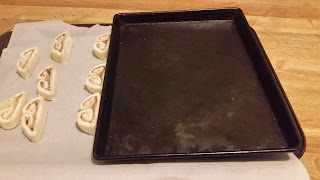 The reason for the paper (or whatever you're using) when squishing the whole batch at once is that the cookies will want to stick to whatever pan you're pressing down onto them. This way, they'll stick to the paper instead of the pan and therefore stay where you put them. Then you can just peel the paper off, and discover that your tiny little wall oven is absolutely perfect for the big baking sheet you're using. Check out the fit! 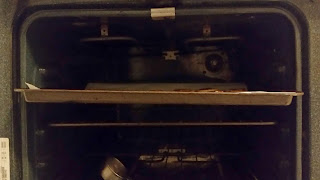 Rather like pancakes, there's no set baking time. But (and this is why you reeeeeeeally want to put a protective layer under the pan) the sugar will sink down and caramelize underneath the cookies. It's delicious and divine. But we want that on both sides, so when the look like this underneath (which will probably take 5-7 minutes).... 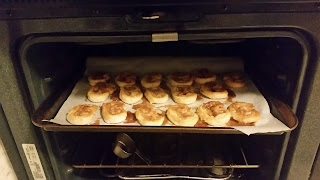 ...it's time to take a spatula (even if you're like my great-grandmother and proudly flip tortillas barehanded) and turn them over.
After a bit longer a time in the oven so that both sides get caramelized, you get these! 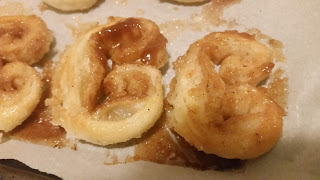 Let's snap one open and admire the sugary flakiness.

These are absolutely delicious. They're fantastically light and airy and buttery and caramelized, like this divoon cross between cookies and candy. We will conclude by passing on some dire warnings from the teacher: If you freeze them ready-to-slice, the sugar will do weird things in the freezer and they won't bake right. If you freeze them after baking, they will be gummy and not so nice when defrosted. So once you start making them, you must bake and eat them right away. But these are so tasty it won't matter that you can't store them. I brought these to a friend's house. The first person to get one promptly took the entire batch and ate them without sharing. They are that good.
Posted by S. S. at 9:47 PM