We at A Book of Cookrye have been working some sadistically early shifts of late. However, it's never too early in the morning to try vintage recipes. The Woman's Club of Fort Worth has provided us with one wonderful breakfast (which you know is good because a previous owner put not one but two check marks next to), but that one involves using a nut grinder and then sectioning an orange before I'm awake enough to know where the light switch is. What can the late 1920's offer to someone who wants to eat without effort?


Did... did someone just write out a recipe for peanut butter and jelly? And publish it?

There's only one problem with doing your peanut butter and jelly like it's still the Jazz Age. If you're mixing the title ingredients first, you then have to wash this. 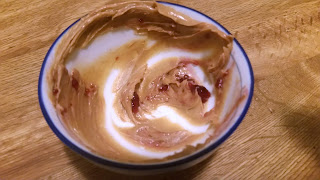 If you're seriously into food history, you'll probably know that while the peanut butter and jelly sandwich gets a few odd mentions in now-barely-remembered books, they weren't really the lunch of the masses until the 1940s or so. You may recognize that the 1940s are well after this cookbook was published. Therefore, I'm not just slapping together something so I don't have to get up even earlier to start up the stove. Instead, I'm recreating food history while too tired to hold the correct end of a knife.

Among the cottage cheese sandwiches, pimiento sandwiches, anchovy sandwiches, and egg-and-olive sandwiches, this recipe truly stands out as the most timeless in the sandwich chapter (and perhaps the entire book). Do try it for yourself!
Posted by S. S. at 1:35 AM