Today, we at A Book of Cookrye are cracking open our favorite chocolate recipe book!
You know how we like our book of all chocolate recipes so much we asked a friend who does duct tape art to make a custom cover for it? Well, for Mother's Day we were commissioned to make an elaborately decorated cake for an extended-family gathering. For this we consulted...

A lot of the time, when we purchase an elaborately decorated cake, it tastes... well, not bad, but meh. Like, they think that once people look at the cake and see that the top looks pretty, they won't actually notice whether the cake is any good or not. Well, we at A Book of Cookrye wanted better than mediocre cake! If the cake is not delicious, it's not worth eating. And so, we used a recipe that (based on a headnote in which the author's mother was threatened with an FBI investigation if she didn't surrender the recipe) seemed very promising. 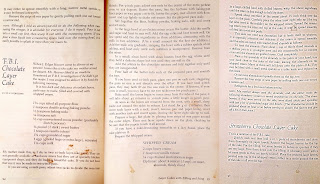 This recipe beings like nearly every cake recipe does--- with lots and lots of butter and sugar! 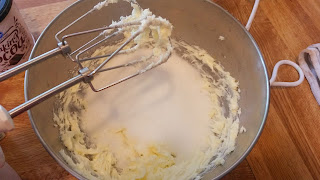 At some point, one is supposed to grow up and stop eating some of the fluffy, buttery, sugary wonderfulness in the bowl. Just like you're supposed to at some point exchange your snapshots tacked to the walls with those LIVE LAUGH LOVE decals. However, we at A Book of Cookrye have decided that at no point will we let adulthood mean we live by someone else's definition of being Properly Grown Up. Furthermore, people who are "too mature to eat cake batter" are probably only "too 'mature' to eat cake batter unless no one is watching." Besides, cake batter is delicious. 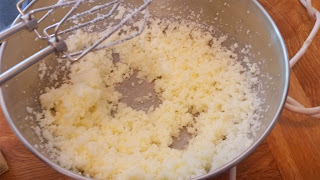 Something about only putting the yellow half of the egg into the cake batter always seemed so parsimonious. Like, are we economizing so hard we have to subdivide eggs? 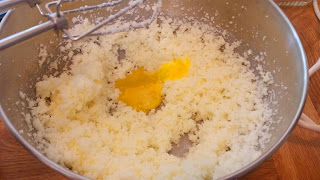 By the way, you might be at least slightly impressed that I actually went out of my way to mix the other dry ingredients together. Furthermore, I decided to make it easier to actually pour them in the bowl without covering the entire kitchen in spilled flour.

Once we got the whipped-up egg whites into the batter, it looked like an absolutely delicious chocolate mousse. Like, I would have been totally fine with pouring this into a pie crust and freezing it. 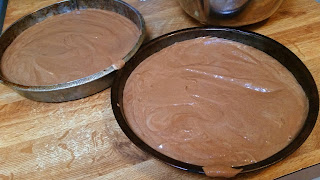 When we want to make damn sure that a cake comes out of the pan, we put a paper circle in the bottom of the pan and glue it down with cooking spray. Lining the whole pan with foil can make cake removal harder than leaving the sides bare- because you'll end up trying to peel the crinkled, folded foil off the sides without taking any chunks of cake with it. When you use a paper circle, you can just cut the cake free from the sides if it has welded itself to the pan. And if it's firmly glued to the paper on the bottom, it doesn't matter. The paper itself will freely fall out of the pan, whether the cake is attached to it or not. However, this time we found out at the last second that we did not have paper.

Fortunately, we have one of those round pans  with those cutter things attached, so we only needed to use foil on one pan. Appropriately for Mother's Day, it belonged to my great-grandmother. 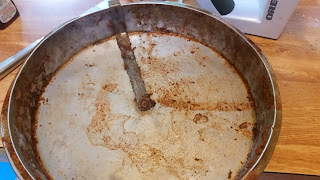 By the way, you should know that foil does not work as a paper substitute. The cake batter crept under it and burned itself onto the pan. 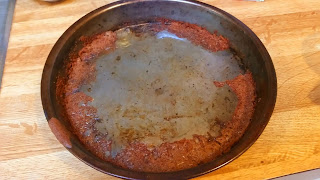 Fortunately, we got the cake out of the pan intact. Also, it had these really neat patterns stamped on it from the foil crinkles. If I'm making an uniced cake, I may do this on purpose. 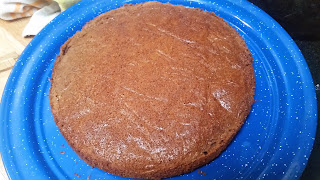 The cutter pan released the cake as hoped. However, we ended up with a top-to-bottom fissure where the the cutter strip had baked itself into the batter. 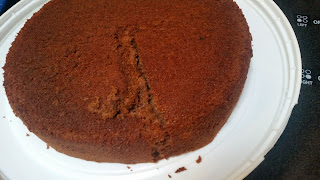 No matter, the cracked one could go on the bottom. Now, it's customary to put a thin layer of icing on the plate under the cake to glue it in place, especially if it's going in the car and spending two hours on highways before we get to the restaurant where our family is meeting. We at A Book of Cookrye forgot to do this. Fortunately, with this cake, it didn't seem to matter. The cake was ever-so-slightly sticky anyway, and stayed firmly put wherever we set it down. 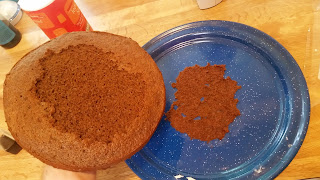 Now, to icing! We're using the special vanilla for the top of this cake. Guess where we got it from? (Hint: What two languages are on the label?) 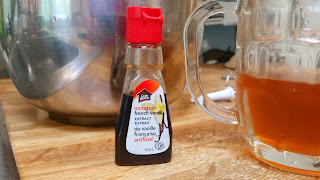 Yes. The extract is imported-- from Canada! Some people bring home various stickers and patches when they go abroad, we at A Book of Cookrye bring home fake vanilla and luggage tags. Now, while we think that icing made entirely with shortening tastes sad and cheap, we had to concede that the weather was getting hot enough to melt cake decorations. If we made our icing entirely with butter, it would taste wonderful but unfortunately droop unless the cake took up permanent residence in the refrigerator. And so, we had to discreetly slip some shortening in there just to make it better withstand the increasingly hot weather. Fortunately, since this wasn't going to sit outside on a picnic table all day in 100° weather (that's about 37° for our Celsius friends), we only needed to add just a little bit of the flavorless white stuff. You couldn't even taste the difference. 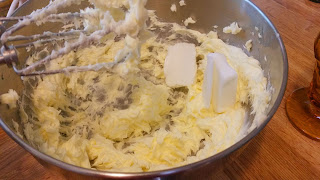 Now, Our Mom of Cookrye wanted this cake festooned with all manner of fanciful cake decorations because Mother's Day. We at A Book of Cookrye, having the earned the distinction of Most Improved In One Semester in the cake decorating class (note that no one said we were the best at it), summoned all our cake-decking knowledge and skills, lined up all our various cake-decorating doodads we had to purchase for the class... and handed the job over to a friend who does henna. 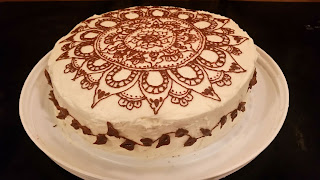 Our friend (previously seen learning to bake here) had misgivings. "But I've never done a cake before! I've never even held an icing bag! I just buy the henna tubes! This feels weird in my hand! You said this was for all your relatives, and I know I'll mess it up!"
I assured her that #1: cake is probably easier than people because it's completely flat and also doesn't complain if you're taking too long to finish the design, and  #2: if anyone in my family complained about inadequate decoration, they clearly didn't want cake.
We decided together that since we were using white icing, a dark color would best show the design. If it was a generic lace pattern, pastel-on-white would have been lovely and cute. But since this was an actual design and not just frilliness, we both wanted it to really show. The brown food coloring we had was unfortunately the color of dog poo, so I mixed in some red to give it a prettier tinge. 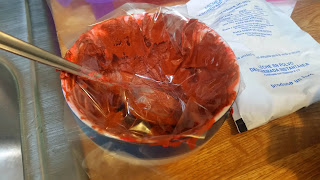 And so, after a surprisingly-short time, our friend produced... this! 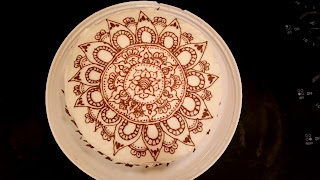 Incidentally, when she was practicing on a paper plate, she did the most gorgeous freehand. We also discovered that red food coloring stains the same way actual henna does. 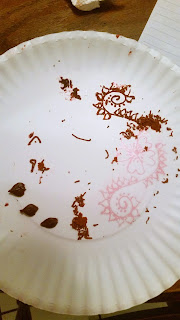 Now, I'd handed the job over with absolutely no intention of telling her what to do, and I didn't. Although I kinda wish I'd told her to just freehand it instead of looking up designs online. 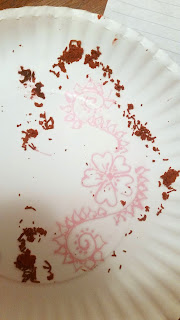 Incidentally, when stacking the cake layers, I should have remembered that the oven is slightly tilted and tried to do it so that the bottom one sort of levelled out the top one. But I forgot to account for the slanted oven. You can really see the sloped top when it's in its little cake container. 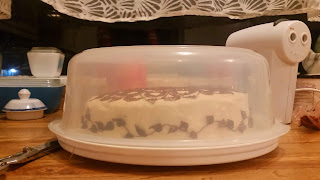 We had a fair amount of extra icing, and decided to make icing macaroons with it. But we had no coconut in the house, so instead we used chocolate chips. 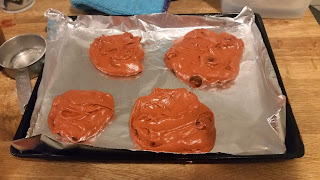 They baked into cookies only a dedicated parent could be proud of. But they didn't taste too bad. 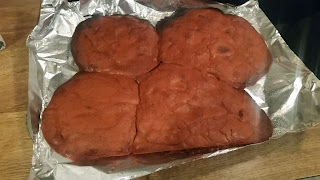 Anyway, back to cake! One of the nicest things about the design my friend did is that it looked pretty even on a small slice. A lot of times, the cake looks lovely before you cut it, but afterwards each slice just has random squiggles and blots of color. However, each piece of this cake had its own little work of art on top. 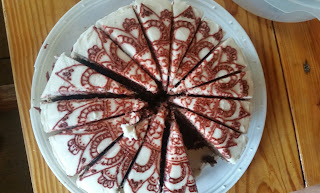 Incidentally, the only reason I can competently cut a cake is because in one of the baking classes, we got voluntold to help at a food bank fundraiser where various restaurants from around the city served food to whoever paid the entry charge. (Don't get me started on the bitter irony of a food bank fundraiser where all the leftovers get trashed.) I ended up cutting pies for one of the diners which had taken out a booth. When you spend all day frantically sawing up pies to keep up with all the dessert-hungry people, you eventually get moderately better at it.
As far as the cake itself.... well, if I had government agents at my disposal, I too might have launched an investigation to get the recipe. It's marvelously chocolately, tender, moist, and ever-so-light when you bite into it. 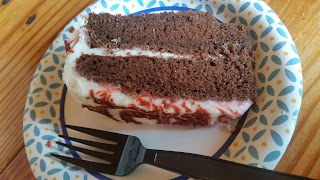