This recipe comes to us from Our Uncle of Cookrye. Is it a recipe or a technique? At any rate, he swears the best way to reheat a pizza is in a frying pan. And as it happens, we have a lot of pizza to test this on. 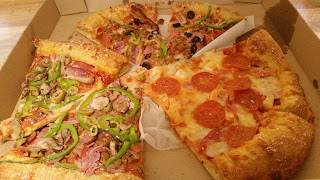 I don't eat that much pizza, but after a family gathering everyone sent me home with all their leftovers-- whether I wanted it or not. Nothing makes you feel good about your food like seeing solidified grease in a color that never turns up in nature. 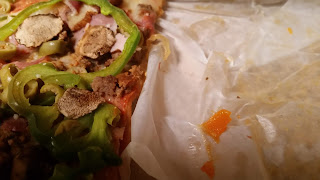 As aforesaid, my uncle swears this is the best way to reheat a pizza. In theory, the hot pan gets the crust good and crisp on the bottom, and the steam from the tiny amount of water carries heat to the cheese and melts it. Does it work? Our first test will be on a slice of pepperoni and pineapple. Which, incidentally, I never ordered before the internet controversy about whether pineapple belongs on pizza. 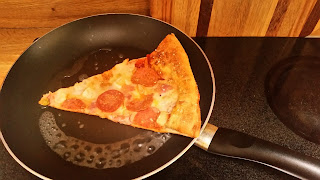 And so, with the pan merrily sizzling away, we clap on a lid that almost fits, and hope for the best! 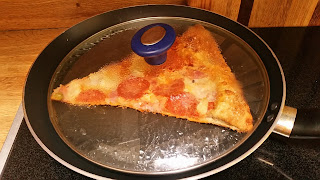 The first attempt at this was... not good. Even though we only put a spoonful of water, apparently that was too much. It came out as gummy as pizza from the microwave. Also, we may have turned the burner too high.

Since we had a whole box worth of leftover pizza to try this on, attempt #2 involved reducing the heat and also the amount of water to barely a teaspoon. We also decided that doing this one slice at a time was too trying on the patience. 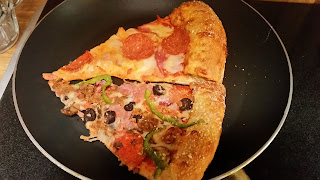 Success! Now, there's no way you won't end up darkening the crust a lot, but if you time it right, you'll have it just enticingly toasty on the bottom instead of burnt. And indeed, if you add barely enough water to make steam (it'll probably be near-completely dry by the time the pizza's ready), you can have pizza that's crispy on the bottom, melty and hot on top, and thoroughly perfect! I won't say you'd never guess it spent a night or two in the refrigerator, but it's pretty good.
It may take a few attempts to find just the right time and stovetop setting, but it's worth it. As illustration, here's both the perfectly-melted top and the almost-but-not-quite-burnt bottom. 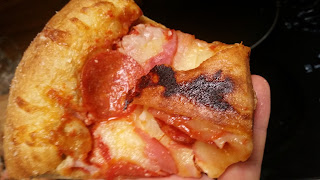