Today on A Book of Cookrye, we salute the Golden Age of the best cuisine of the world: England in the 1970s!


This comes to us from Jenny Webb, who was a UK-based kitchen and home electronics consultant for various companies. In her retirement years, she now has various social media pages (on her Twitter, she describes herself as a "microwave oven pioneer & history expert of home electrical appliances") where she shares the more amusing highlights of staying determinedly up-to-date throughout her career (including such things as a microwave cookbook-on-cassette she did). She's also the person who found and posted the 1930s British picnic recipe reel which we made and foisted on friends.
Anyway, she did a 3-part series called Tastes of the 70s. I know I'm excited to find out what one would find on a British table in the 1970s, aren't you?

Looks pretty straightforward, doesn't it? And here's our main ingredients! 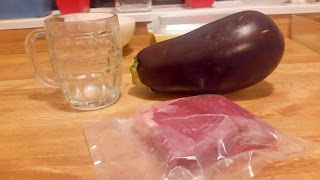 You may notice that we're not using ground beef but a steak. In a casserole. You may think that we at A Book of Cookrye have gotten extremely extravagant, but actually the extravagant ones are our parents. You see, one of Our Cousins of Cookrye lives out in the country. As in, has livestock and everything. Our parents, said cousin, and an uncle decided to co-purchase a cow which would be raised on said cousin's pasture. When the cow came of age, it was taken away from the pasture in a trailer and returned in shrink-wrap. And so, we now have one-third of a cow, frozen in packaged pieces. Baking a steak into a casserole doesn't seem so extravagant when there's a whole bin of the things in the freezer. Furthermore, there was like no fat on this steak, which mean no one has to stop and drain the grease out of the pan.
About a spoonful of that reddish fluid that people swear isn't blood dripped out of the package when we cut it open. Figuring it may add some sort of extra flavor (or something like that), we added it to the pan. It promptly turned into something opaque, beige, and solidified. 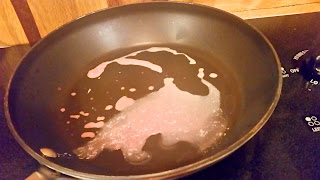 You may think we went squicky and wiped out the frying pan, but honestly the meat was soaking in it the whole time it was in that vaccuum pack anyway. Speaking of, let us now cook cow! 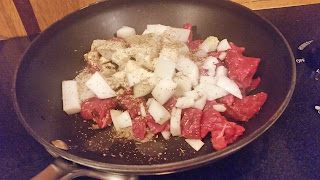 It's hard to find a recipe that starts with "Brown the beef and onions" and ends badly.  This recipe takes the unusual step of not bothering to actually finish cooking the meat before moving on. Nope, we're just dumping a can of tomato paste on this half-raw meat and moving on. 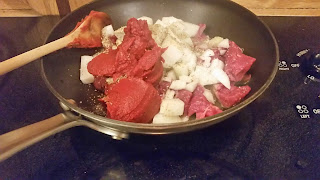 This looks exactly as appetizing as you'd expect a pan of half-cooked beef and raw onions to appear. Though if you loooove rare steaks, have I got a delicious steaming pan-load of stuff for you! There's not a single piece of fully-cooked beef in here. 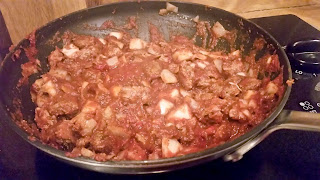 If you think I find rare-only snobs annoying, it's because for whatever reason, we've been making a lot of rare meats in cooking class. What's the point of getting a restaurant's worth of commercial-grade stoves if you don't actually cook your meat? We've had to choke down raw beef, raw bird, raw shellfish, and various uncooked things from elsewhere in the animal kingdom. I tried to approach it with an open mind, but it turns out I like meat cooked. Which is why, per the recipe instructions, we're clapping a lid on this and leaving it for quite some time.

Anyway, let's move on to the eggplant! We are always looking for ways to eliminate superfluous calories here at A Book of Cookrye, so we thought we might modernize our eggplant methods. 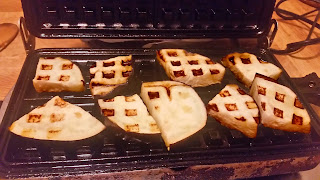 This got a really nice browned coat on the eggplant slices, but did not cook them through at all. It turns out that raw eggplants are like sliceable foam on the inside. As such, they insulate themselves from getting cooked. Those who watched the video may have noticed that her eggplant slices emerged from the frying oil a lot smaller than when she put them in. These eggplants did not.
We decided to just do the rest of them in the frying pan. But since we didn't want to deep-fry anything, we got raw eggplant with near-black coatings.
But let's move on to the gravy! This is the weirdest part of the recipe. Obviously, like everyone in America, we have made and eaten many a casserole with cheese melted and browned on top. We have also cranked out many batches of white gravy and dumped it on things. But we have never baked gravy on top of a casserole. We would have thought this daft, but it worked in the video.
Most people use butter in their gravy, but we have a lot of schmaltz sitting in the refrigerator. On the justification that it would probably add a lovely flavor to the gravy (and not at all because it's been sitting unused for months because I feel guilty throwing it out), this was used instead of butter. It made the kitchen smell like overboiled chicken. 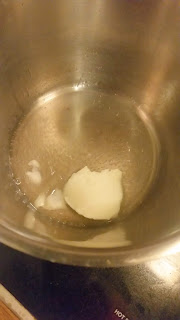 However, the schmaltz gravy tasted reeeally nice. And this comes from someone who doesn't even like gravy. The chicken flavor did wonders for it. However, in case you don't like gravy, you'll like the next step in the recipe: add lots of cheese! Now, she recommends that you shred your cheese before you start doing your white sauce. Which makes sense. But we decided to be lazy and just throw a couple of cheese slices in there. 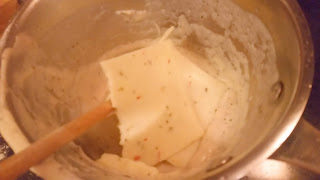 After we got the cheese in there, the sauce was oddly rubbery. Like, if you've ever done your own lye soap (or at least watched a video about it), you'd recognize what's called trace. 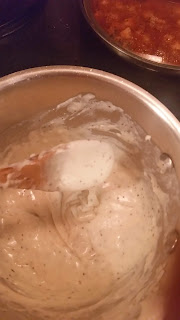 But back to the meat! The whole time we were doing the cheese gravy and the burnt eggplant, the meat was gently simmering and stewing away. True to Jenny Webb's promise, the onion and beef were both nicely cooked. Actually, the meat was fantastically tender after simmering for so long. And so, it was time to get this put together. I know it looks like I was just rage-throwing things into the pan, but the cheese gravy will hide all ugliness. 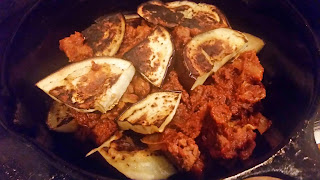 Sometimes it's reassuring when you follow a recipe video and your creation looks just like what's on the screen. Other times, you've made a pan of soggy vegetables, tomato paste, and a lot of white glop. 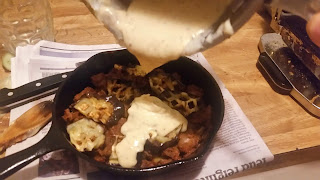 Like all casseroles, by the time we're done covering it, you can't tell what's under all the cheese. 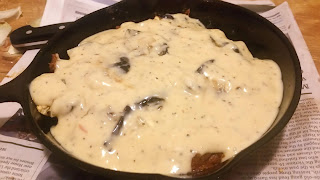 I've never poured gravy on top of something and baked until brown and bubbly. Turns out it works rather well. I could barely tell the difference between this and just dumping a bag of shredded cheese on top of dinner. Which... does that make doing gravy better, or does that mean I could have saved myself a lot of bother and just used the cheese? 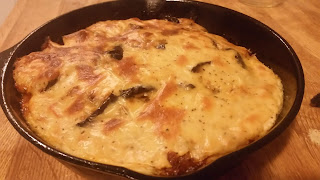 Let's get a closer look at that cheesy toasted goodness. 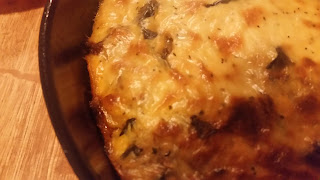 It was at this point the good camera lost its battery, and so my phone was brought into service to show you this delightful British dinner. I even made sure to make tea to serve with it. 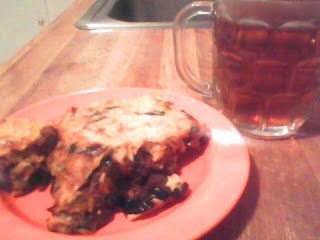 I have to say, this came out a lot better than it should have. I was expecting it to taste like canned tomato with cheese on top. But instead it was really good. Like, I'd make this again. And it really is easy to throw together.
Is it authentically Mediterranean? Probably not. And there may be those who carp and criticize- a friend I was describing it to was like "Eggplant lasagna? You couldn't use actual pasta? I'm not eating lasagna made with eggplants!"
However, it's a big pan of meat in tomato sauce with cheese on top. You should totally try it.