Do you hate sausage that curls into little grease cups? 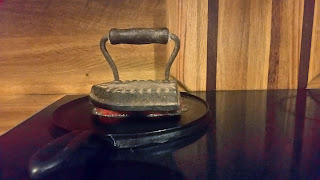 I love it when a recipe's so simple it feels silly to write it out. Anyway...
This iron has been sitting in Our Grandmother of Cookrye's house for years. However, many of her possessions are being downsized away. We thought this might be able to come off the shelf of dust collectors and have some purpose in life.
I'd honestly thought it was purchased new in the 1970s, when there was an odd interest in prairie things. Like, I thought it was just some home decor company cranking these out so people could add rustic ambience to their figurine shelves. Then I decided to heat it up on the burner (it is cast iron, after all) so that the sausages could get heated from above and below and cook twice as fast. This thing gave off a surprisingly-strong smell of ironing starch as it got hot. I think this was actually someone's iron they used on clothes, and not a reproduction sold for people who needed knickknacks. 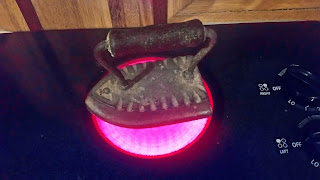 For those who wish to try this at home, you should know that this thing takes a long time to heat up. We put it on a burner which we then turned up as hot as it can go. The air coming up from the burner was so hot, you'd burn the bangs off your forehead if you leaned forward and looked down. However, after two minutes of this intense heat (I was watching the clock), the iron was about as warm as a bath. I took it off that blazing-hot burner and could drop it hot-side down into my hand without burning myself. So from an energy-use perspective, it may be best not to try to preheat your iron for faster sausage cooking. Also, after waiting for so long for it to finally get hot, you won't have saved any time anyway. We suggest you just turn the meat over to cook both sides, just as you would if you weren't ironing it.
However, if you do decide to preheat the iron, you have only a very short time before your sausages become cinders.

I'd briefly wondered if anyone would have actually done this before we had electric irons. Then I realized that anyone who decided to make their irons do double duty in the kitchen would have to hand-wash burnt-in sausage grease and bacon fat out of their best clothes because washing machines didn't exist yet.
Anyway, this does work very well if you don't accidentally burn your sausages. They come out nice and crisp on both sides. However, they do sometimes tend to stick to the iron. Have your scraping spatula ready to get them off.