Happy weekend after Thanksgiving! We at A Book of Cookrye, to our surprise and ever-so-slight disappointment, have noticed that while the Christmas shopping ads started right on schedule in September (as they have since, like, the 1880's), the annual spike of crusty crankypantses on TV screaming about the War On Christmas has somehow not happened. In fact, for the first time in at least five years, no one has gotten on the news to rant about how the Starbucks holiday cups are nonsectarian instead of covered with swarms of baby Jesuses. Anyway, now that the shopping season is in its inevitable full swing, let's talk about Thanksgiving!
Well, this Thanksgiving everyone was on a diet. We are usually responsible for desserts, which really restricted our recipe choices. When told we should do diet recipes, we were like "Oh, I'll do diet recipes for you. I got your diet recipes RIGHT HERE!"
Remember when we signed up for the Pieathlon and got a 1970s diet pie? 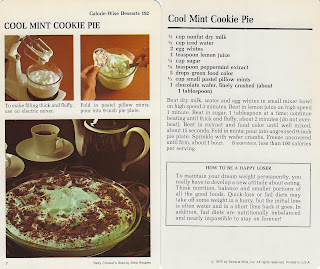 We had thought, after making that recipe, that it had unrealized potential. That it was almost but not quite good. The biggest fault, of course, was the presence of whole pillow mints which froze into pillow rocks. Those we struck right out. But by adding a wee bit more sugar (because of course we did) and adding a pinch of vanilla and a tiny bit of salt, we arrived at... this!


This is not the first time we have foisted recipes from frightful times in culinary history on our unsuspecting family at Thanksgiving. Remember when we let everyone taste British Depression-era cuisine?
Well anyway, we decided that if everyone is on a diet, they can have a taste of what it's like to diet in the 1970s. Although we took issue with trying to serve this as a pie. Dumping your whipped green glop into an empty pie pan does not a make it a pie. We decided to serve this in individual portions. It was easier than figuring out how to serve up ice cream on Thanksgiving day. It's not like you can just leave it out on the table all day so everyone can help themselves. Especially this recipe, which (as we discovered) melts immediately. 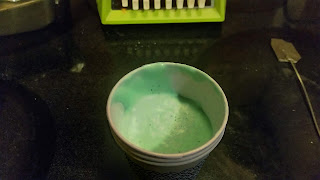 Also of note, this recipe is definitely easy. How do we know? We actually didn't make it! We handed it off to our brother (well, one of them anyway). Despite not having ever cooked whipped and frothy fripperies, he made it without any problems on the first attempt.
This then brought us to the matter of packing it in individual servings. Were this at home, I would have put it in heavy glasses which would have insulated it for a bit when removed from the freezer. However, we were taking these to a gathering, and absolutely did not want to spend the latter half of it chasing down glasses to bring back. A disposable option was needed. 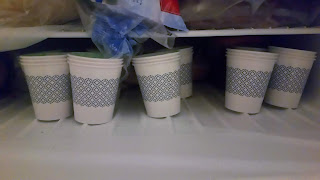 We're stacking the cups in the hope of adding air pockets of insulation. Styrofoam was considered, but I objected from an environmental standpoint. Our Brother of Cookrye saw the freezer full of tiny paper cups and said it looked like we were saving urine samples.
As for the frozen minty stuff itself...

It tastes like minty Cool Whip. If you like mint and if you like Cool Whip, you should definitely make this! Given its provenance as a 1970s diet recipe, I am very surprised to say that it is as good as the many diet ice creams that have conquered the freezer aisles of late.