We at A Book of Cookrye have been helping friends with housecleaning. We have previously seen their electronics lab here when we were tutored through reviving a vintage stereo.
Let me tell you, you find out a lot about people when you're cleaning their house. And you may soon know better than they do where things are in their own domicile. Which brings us to... this!

This is a fricken huge waffle iron! We pulled this out and were informed "I think that was my grandmother's." Apparently, in addition to having a near-bulletproof pink sewing machine, his grandmother really liked making waffles because this thing makes a lot of them. Here's the inside of it with bananas for scale. 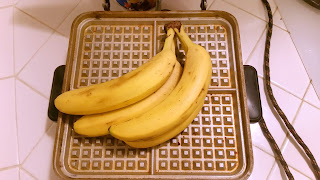 In addition to being huge, this one is a lot fancier than our waffle iron. It has an adjustable scale like a toaster. 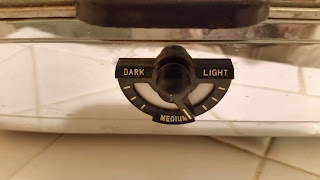 Anyway, we at A Book of Cookrye, when presented with appliances old enough to have witnessed 10 US Presidents, tend to just plug them in and figure that we probably won't die or burn the house down. However, in the presence of people more cautious than we, this was tested for short circuits before we had a chance to plug it in and find out if it had one by trial and accident.

And so, we were to make waffles! Or so we thought. As the requisite ingredients were not in the kitchen (as tends to happen when one visits people who never bake), this was obtained instead. 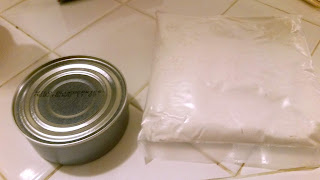 Yes, it's a bag of synthetic muffin mix, but you know it's the classy version because the blueberries came in a separate can that you have to open for yourself. 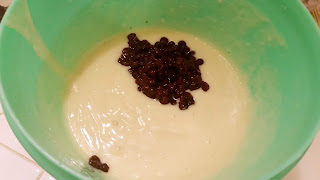 Doesn't this look... er... edible? The trick is to barely stir in the berries, so the juice makes enticing swirls instead of turning the batter a uniform gray. 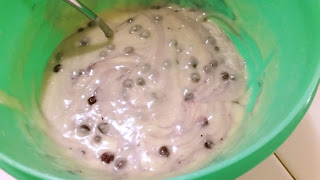 We knew this waffle iron was huge, but we did not expect a complete batch of muffin mix to fit on it all at once. 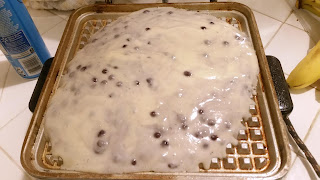 Anyway, we got the waffle iron plugged in, and it turns out there's a little light bulb in it! And it's not even a tiny little red LED, but a genuine incandescent bulb. 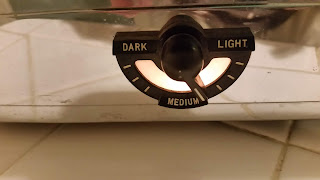 Anyway, we probably should have held off ever-so-slightly on the batter because there was just a bit of spillage. But there wasn't the oozing hot waterfall one might expect from dumping an entire batch of batter on a waffle iron all at once. 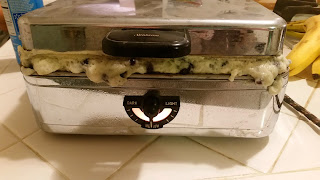 We'd wondered how we'd know the waffles had reached their desired degree of doneness. Did this thing also have a little bell in there? Then the little light bulb turned off, which we took for a sign to lift the lid and reveal... this!

I must have used half a can of cooking spray on this thing, and still I am betrayed! We attempted to gently prise some of this failure off of the lid. We found ourselves apologizing to our friend's deceased relatives for what we did to their kitchen appliances.

We gamely attempted to actually serve up this travesty. 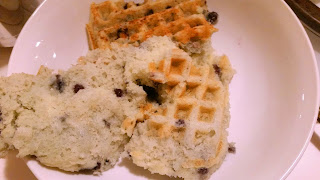 And so, we spent more time gouging crumbs out of the wreckage of the waffle iron than we spent on making and eating waffles combined. 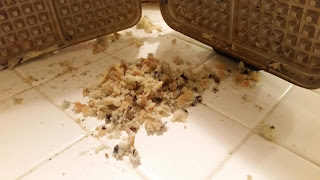 Most people might decide to let the waffle iron go back to resting deep in a forgotten shelf, but we at A Book of Cookrye are already scheming about what to cook on it next time.
Posted by S. S. at 1:25 AM