We at A Book of Cookrye would like to salute our wedding blender which died.

One day it simply stopped spinning and made a sad electrical whine. It never worked again, and so we sadly sent it to join many failed electrical appliances in that great thrift store in the sky. I was more than a little miffed at its death. It's generally said that people base their wedding presents on how long they think the marriage will last. Which means that my brother who got this as a wedding present should track down the person that gave them a short-lived blender and send a strongly worded note.
We tried to at least give away the pitcher on Craigslist, but no one wanted it. Perhaps everyone else who bought one of these also had their motor burn out.
In contemplating a replacement, we realized that all the blenders we see in peoples' kitchens are either very new or very old. No one has a blender they bought four years ago, they either bought it last year, or they bought it in the 1970s. If we could find a blender that has already survived a long time, it would surely never give up and die like the newer one did. With that in mind, everyone meet our new friend! 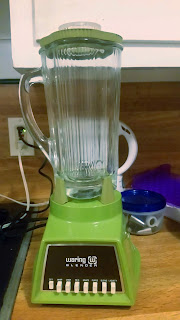 Looks like like something from the set of The Brady Bunch, doesn't it? When we plugged it in, it was eager to explore its new home.

This blender is so powerful it actually propels itself across the counter. It's so loud it sends the dog fleeing. It even rattles its own buttons.

Today, we are using the blender to repurpose the extra apples from when we made all those individual pies. The little pies turned out smaller than anticipated, meaning that we had all this extra diced fruit that wouldn't fit.

We could have made more crusts to put the surplus apples in, but we had no desire to do that sort of extra work. We therefore decided to blenderize the apples and dump them into our banana bread recipe instead of bananas.


They didn't properly liquefy until we added the eggs into there to move things along. Since the apples already had trace amounts of cinnamon and such, we decided to bring out the shakers and keep adding spices until the apple paste was visibly darker.

Now, we had to veer off the recipe because we couldn't add the eggs. They were a bit too pulverized with apples. So we just added what we thought looked like 2 eggs' worth of apple slurry. 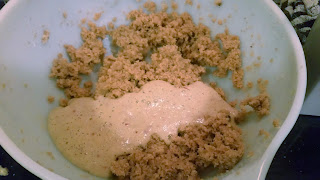 We then figured we would proceed with the rest of the recipe as if nothing was weird, and add the rest of the contents of our blender when we would have been adding the mashed bananas. It seemed to work, though we usually get more of a runny batter than this. 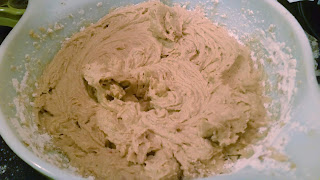 Reassuringly, it at least superficially resembled a cake, even if it sprang back a bit more than I'd have liked when pressed in the center. Are cakes supposed to be bouncy? 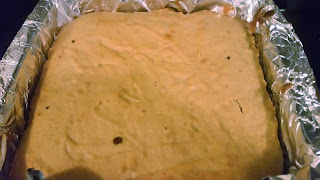 We figured that we could not at this point fix any problems this cake had, so we just dumped cinnamon icing on it and left it for the night. In retrospect, we should have at least snipped off a corner for evaluation before serving it to others. Fortunately, this actually came out fine. As evidence, this is how much cake was eaten away. 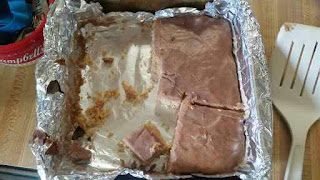 You couldn't really taste the apples, but we added so much extra spice that we just told everyone it was spice cake. In texture, it was something halfway between cake and brownie. Next time we make apple pie, we may deliberately cut up too many apples and do this again. 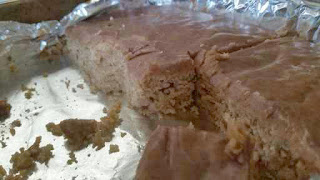