The Magic of Garlic Bread

One should always be careful when allowing us near garlic. We often end up saying things like "The recipe calls for one garlic clove, so I only used six."
Garlic is magical. It tastes like pungent happiness. We actually make garlic bread as a relationship test. If someone can't handle his garlic, it will never work.
Which brings us to.... more garlic bread! This also involves vintage cooking appliances. 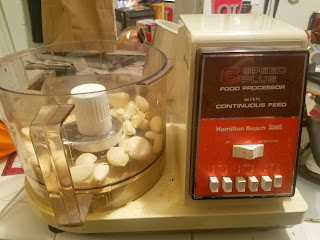 We have previously shared our special technique for garlic bread. This also led to someone personally writing in (with pictures!) to endorse it. Now we are going to terrify everyone within smelling distance of the kitchen, because we are cooking together with someone who loves garlic as much as we.

We had a bit of an issue operating the food processor. It simply would not turn on, no matter how many times we tried putting the blades on at different angles, removing the canister and putting it back on again, or otherwise futzing with it. Then we realized that there's an extra flap that goes into this one slot right here. It then presses on some button in there, which acts as a safety interlock. It took us a while to figure this out because we didn't think we were supposed to shove parts of the lid into the motor housing. 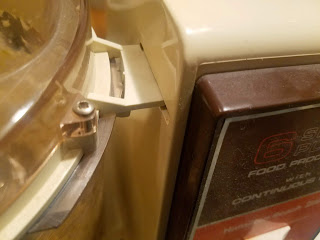 And now, instead of tediously mincing two bulbs' worth of garlic cloves, we can pulverize them the modern way! 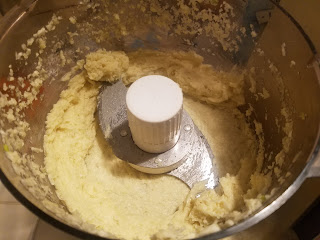 This is why we can't be trusted around modern labor-saving devices. Without a food processor, we would have had to either squeeze all of this garlic through a press or hand-chop it. This would have limited the amount of garlic we were willing to use. But here in modern times, we can use garlic in terrifyingly expressive ways, unfettered by any tedious drudgery. True, we had to peel them, but after that, the garlic bread just flew together. We didn't even have to soften the butter first. 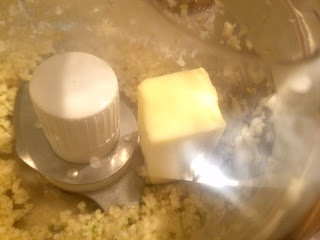 And now, we are almost ready to simultaneously make dinner and fumigate away vampires! 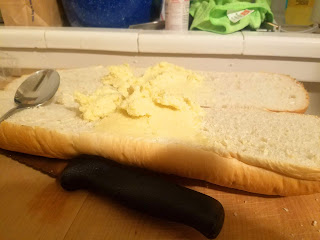 You are looking at one bulb of garlic per side of bread. 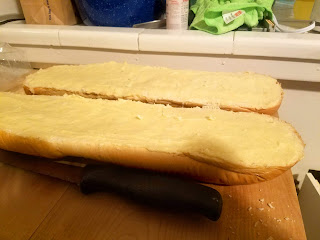 Incidentally, we decided that we could not just waste the last of the garlic spread clinging to the sides of the food processor. So we wiped it off with a bread slice which would then go into the oven along with the fiery and pungent main attraction. 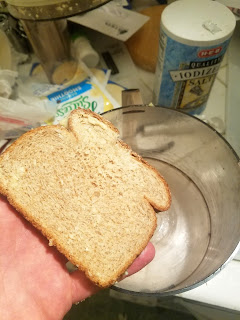 As you may know, we at A Book of Cookrye slow-roast our garlic bread. It spends up to an hour in the oven, which we have set to a much lower temperature than anyone ever uses for baking. This transforms the fiery garlic into sweet and mellow roasted garlic. However, this also turned this puny little sandwich slice into something sad and burnt. We passed it over to someone else at table, who bit into it and said "It's actually still good!"

Anyway, we unveiled this bread about an hour after we had first introduced it into the oven. The top had taken on a striking resemblance to peanut butter, and the hot air venting out of the oven brought tears to the eyes. 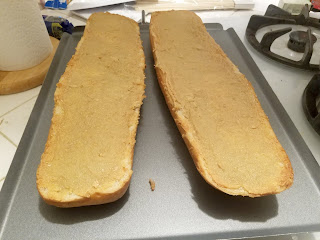 This was the strongest garlic bread we've ever made- it was like garlic wasabi. However, we had no leftovers. Interestingly, people noted that you couldn't eat this bread and drink soda. One person took a single sip and yelped "It's like battery acid on my tongue!" Another person, too intrigued to resist, tried for himself and confirmed that mixing high-intensity garlic bread and soda causes acute pain.
As a final note, we have achieved a new allium achievement: the oven smelled powerfully like garlic when we fired it up the next day.
Posted by S. S. at 3:38 PM